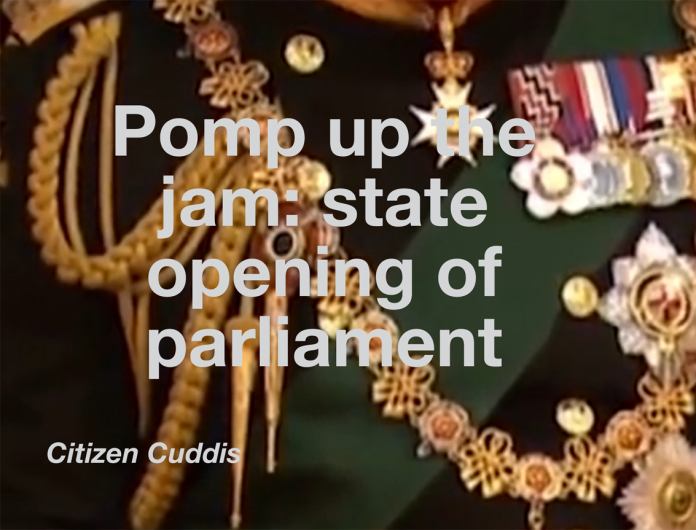 When 18th-century natural history boffins first discovered that their I-Spy book of antipodean animals had no tick box for the platypus, they panicked. Was it a duck? A beaver, perhaps? Or a prank by the Almighty, the baffled boffins wondered. Their restless leg syndrome abated only once they’d uneasily agreed that the egg-laying mammal was a cross between a lavatory brush and an otter.

Given the Dickensian advance of child poverty in the 21st century UK, the absurd spectacle of the state opening of parliament (SOP) appears to right-thinking people as logical as a cross between a lavatory brush and an otter. To find a spectacle as devoid of common sense as the SOP, you’d need to set the dials of your time machine to 1568, when nutty behavior was all the rage. During Lent of that year, St Ogbourne of Dunter walked backward on stilts from Lourdes to Canterbury, carrying the ossified hurdies of St John the Baptist in his satchel.

The state opening of parliament is a criminally ostentatious annual event that leaves taxpayers £200,000 out of pocket and could have been choreographed by Baz Luhrmann on Meow-Meow. And all so that a 96-year-old woman can read someone else’s lies off a yard of goatskin to politicians who have no intentions of taking responsibility for delivery of its contents.
The hallucinatory peculiarities of this parliamentary tradition are hard to grasp. So, if, like me, you can’t tell the difference between black rod and black pudding, here’s a quick primer.

The Pythonesque buffoonery of the SOP starts well before the ceremony itself, with the ceremonial searching of the Cellars. This task falls to the Yeomen of the Guard, ruffs at their shirt sleeves as flamboyantly frilly as the knee holes of Marie Antoinette’s bloomers. They search the Palace of Westminster cellars, to satisfy themselves ‘that the traitorous ne’er-do-well, Guy Fawkes,’ isn’t skulking about down amongst the barrels after four hundred years.

Once the yeomen deem the cellars Fawkes-free, the Queen proceeds from Buckingham Palace to Westminster, escorted by the Household Cavalry. She arrives at Sovereign’s Entrance and moves to the Robing Room.
The Queen bears the vertebrae-crushing weight of the Imperial State Crown atop her barnet. Trailing the Robe of State (a fifty-metre length of Carpet Warehouse off-cut), she leads the royal procession through the Royal Gallery. Eventually, she reaches the House of Lords, where she grabs a well-earned rest.

A senior toady known as Black Rod then swans off to the house of commons to summon MPs to come to hear the yada yada yada of the Queen’s speech. Here tradition dictates that the door must be slammed in their face Jehovah’s Witness style. Black Rod then strikes the slammed door three times with a stick (well, wouldn’t you?), and members follow the toady and the Commons Speaker to the Lord’s chamber. Here they are treated to the spectacle of the monarch casting a spell of grand narcolepsy over the nation with blah-blah-blah from the throne about legislation that invariably makes false promises about illuminating the sunlit uplands of the parliamentary year ahead.

Job done, her Maj heads home in an Uber to hang out her washing (if it’s her turn of the drying green.) Trumpeters from the Queen’s Rooty-toot-tooters, their instruments festooned with tapestries, puff out their cheeks to squeeze out a note or two. The melody sounds uncannily like air trapped in the lavatorial plumbing of Captain Nemo’s Nautilus.

This year the Queen didn’t show, and her eldest, Charlie, gallantly took up the slack – such as it was. The prince spends much of his time cosplaying a tatty bogle when not on official duty.
The palace announced that ‘the Queen continues to experience episodic mobility problems. In consultation with her doctors, she has reluctantly decided that she will not attend the State Opening of Parliament.’

My granny – a great liner of turf accountants’ pockets in the fifties often experienced ‘episodic mobility problems.’ Usually, after Lester Piggott gifted her three winning half-crown doubles and a five-bob treble after a blinding day at Goodwood – enough to underwrite a bottle of Grouse from her local Coopie, at least.

But while my granny occasionally got a return on her stake from a flutter on the gee-gees, taxpayers never get a return from pompous ceremonial fripperies like the state opening of parliament or arguably from any expenditure relating to the monarchy.
Estimates of the annual cost of the monarchy depend on who you ask. ‘£345m,’ say cost-savvy republicans. Tuppence three farthings counter the monarchists (based on a survey of 1003 royal courtiers, household cavalry, BBC Royal correspondents, and Nicholas Witchell.)

Does this matter? I should cocoa – and you should cocoa too, for that matter! Especially now that, according to official figures, around 14.2 million people live in poverty in the UK: 8.5 million adults, 4.5 million children, and 1.4 million pensioners. Watched over by a Tory cabinet with the emotional intelligence of Vlad the Impaler.

The Joseph Rowntree Foundation defines poverty: as ‘When a person’s resources are insufficient to meet their minimum needs.’ Try to focus your mind beam on that for a moment. Four million, five hundred thousand children whose minimum needs are consistently not met in one of the wealthiest countries on earth.

Shortcomings of the poor

When times get hard, the Tory party falls back on their usual cocktail of lies and victim-blaming. The current cost of living crisis has seen no departure from this default position. Rishi Sunak ‘explains’ that he can’t give the poor more money because the DWP still uses a car battery-powered abacus to calculate benefits.
Another Tory MP, in a virtuoso display of gaslighting, recently told the poor that the reason they’re poor is that they can neither cook nor budget for toffee. They simply don’t know, as he does, how to stroll to their usual table in a taxpayer-subsidised HOC restaurant, wearing a pair of £1,500 Salvatore Ferragamo Oxfords. So, they’ve no one to blame but themselves, really. Besides, it’s a scientific fact that you can feed a family of four for a week on a box of rusks.

Some say one way to defeat poverty is to introduce some form of universal income. Those advocating a universal income scheme for Scotland calculate that to give every adult a basic income of £2,400 per year — later rising to £4,800, with children getting slightly less, would cost £1.9 Billion. Personal tax allowances could be ditched along with universal credit. They’d continue making payments for housing, disability, and state pension.
The figure of 1.9 billion will have blue-rinse Tories clutching their pearls. How could we ever afford it? After all, we’ve all those potholes to fill before we even start thinking about hungry children! But don’t be fooled by the blue-rinse brigade – or the media and their client journalists. Poverty is a political choice exercised. It is not a fact of life.

We could make a good start by selling off the crown jewels. This collection of 140 ceremonial objects boasts 23,578 precious gemstones and has been valued at over £3 Billion. Every year, a smattering of these trinkets is displayed during the SOP, then locked away again for another twelve months. With political will to spend what we have in a more citizen-friendly way, we could end poverty

Granted, leapfrog will become an Olympic sport before the Conservatives muster the will to help the poor. A Tory politician recently said that the poor should work longer hours or move to better-paying jobs to get out of the cost of living crisis. We are no longer shocked by such statements. It’s what we have come to expect from the party who gifted us Liz Truss, Sajid Javid, and Rishi Sunak. Not to mention the maestro himself, Jacob Rees-Mogg, the Minister of State for Brexit Opportunities and Government Efficiency, the archetypal Tory, leading the cabinet charge to bend the truth more often than Uri Gellar bends spoons. He and most of his cabinet colleagues would give St. Ogbourne of Dunter a run for his money in the howlingly bonkers stakes. 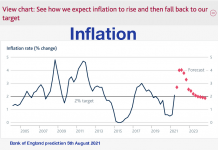 Treating all one parent families fairly