A week to go and is there any doubt? Of course there is. This is an election, not an opinion poll and if there’s one thing we’ve learned, it’s that you can’t trust the people…the buggers will do precisely what they want and to hell with the experts. 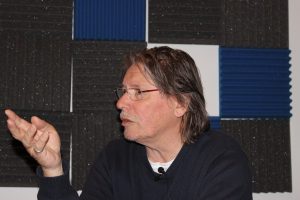 In our system, it only takes a handful of Don’t Knows to think: ‘Damn it. Ian Davidson’s office did help me with that debt problem and even if he is a supercilious wee Rangers man, he keeps my vote.’ You can stack up as many votes as you like but if he gets a handful more than you, he takes it all and you walk away empty-handed.

No matter what the polls are saying, that’s what will happen to some of the SNP candidates next week, left wondering What if and If only…

It isn’t scientific, it’s organic, human and unpredictable and up to 30 per cent Undecided is a Death Star of an imponderable hovering over the vote.

Presumably the Labour switchers who have given up on the party are already committed and are telling the pollsters so. Most of them sound utterly sickened and determined never to go back.
But under the Don’t Knows there will be platoons of potential Labour defectors going Maybe’s Aye, Maybe’s No. And I think part of their dilemma is that they are not really deserting Labour.

The polling shows a healthy proportion of Labourites want their party to get a right doing and spend some time in intensive care when it will change its ways and return fit enough to claim back their vote. So they are prepared to vote SNP but plan to return to Labour if the leadership ever gets the message. In that frame of mind, they probably are still not ready to tell a third party on the phone ticking boxes to each answer that they’re going SNP.

Don’t Knows as a general rule breakdown in a similar pattern to those who have told the pollsters their voting intention – which would guarantee roughly half of them for the SNP. Remember too that a good number of Don’t Knows will not vote at all and just live endlessly never making up their mind. Turnout is likely to be 10 points less than in September, I reckon.

Are SNP voters more likely to turn out to vote? I don’t think the commitment is as strong as it was in the indyref, despite the euphoria, but equally I don’t see the total commitment to vote against the SNP that some have tried to drum up.

Tactical voting worked when Scots wanted rid of the Tories but much was different back then. Now we have the phenomenon of one party tearing away voters from all sides, we have the severe collapse of the Lib Dems, the crash in Labour and the steady resilience of the Tory vote, all forcing adjustments to the great Heath Robinson Tactical Voting Machine.

For example, it’s obvious that in Charlie Kennedy’s West Highland seat and Danny Alexander’s Lochaber redoubt (as well as Michael Moore’s Borders hideout), the anti SNP vote should be Lib Dem as they are the incumbents. But hold on. If the Lib Dem vote is ebbing (4 per cent) how much of it will stay loyal in these seats? We can discount Labour in all three for historical reasons which leaves the Tories.

Now I don’t believe many Lib Dems, opposed to independence or not, will give their vote to Conservatives as they come from a radical tradition which rejects the landed aristocracy. In fact, the SNP, minus independence, is the logical place if they desert the Lib Dems and you may remember the late John Farquhar Munro MSP declaring that Salmond was best man for First Minister in 2011.

When the Lib Dems in Gordon (sitting member retiring) laid claim to be the home for the anti-Nat vote, the local Tory chairman went nuts (more nuts) and pointed out that on the doorstep Liberal backing was dissolving, so they should vote Tory to stop Salmond. But then we find polling shows the Tories seriously challenging Moore in the Borders.

It was much simpler when you could vote for any non-Tory party because the others shared much of the same centre left agenda and they all had a pretty steady support profile – no unprecedented surge on the one hand and no death crash on the other.

The Tories are, unsurprisingly, presenting themselves as the logical anti-Nat vote in East Renfrewshire but that has to be destructive of the concept of tactical voting because the best anti-nationalist candidate is undoubtedly the incumbent, Jim Murphy. Murphy already hoovers up Tory votes anyway so a campaign to peel them away to the Real Tory candidate can only damage anti-SNP voting.

There is no cohesive, easy-to-follow logic to tactical voting this time and it would be easy for those tempted to try, to back the wrong horse and neutralise their opposition.

We shall see but I’m deeply sceptical that the normal switching can be made to work in more than a handful of seats. Remember that in lots of places the SNP wasn’t even second in 2010 and in some was fourth! They are now like a giant Catherine wheel rolling through constituencies, causing panic and disarray.

It does look as though the Tories will be the largest UK party – my long-term projection – but unable to form a government. Labour will be able to but only if backed by the SNP.

I think the ground is being laid by the British for a full frontal assault on what would normally pass as parliamentary democracy – expect changes to the voting system, rule changes to exclude non UK parties from government and attempts to form a Grand Coalition of Tory and Labour perhaps until a new system can be devised to keep the Unionists in total control.

All of this presages the end of Union sooner rather than later.

Sturgeon: Vote for an independent Scotland, and a better UK