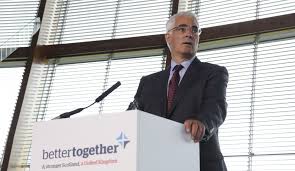 First Alistair Darling, former Marxist and anti-government protestor, late socialist and Labour MP, has accepted a job on the board of Morgan Stanley, a serial appropriator of guilty pleas and massive fines over everything from sex discrimination to cheating customers and rigging markets.

Then his Unionist associate, the former Liberal Democrat Secretary of State Alistair Carmichael, has his reputation trashed by the courts. He is a man whom the judges felt lacked credibility and reliability, is a blatant liar showing lack of candour – an unimpressive witness at best disingenuous, at worst evasive and self-serving.

Two spivs together ready to go to any length for personal advancement, both lacking the essential element for public office – decency.

In Darling’s case, he didn’t just traduce his own country, its history and people, he filled his trousers while doing so, jetting around Europe at the behest of corporate clients picking up £12,000 a go. If anything reveals the dark heart of a broken so-called workers’ party, it is the bland acceptance by the membership of this kind of personal profiteering while in office –and while in receipt of two and a half times the average salary. (On the same day he joined Morgan Stanley, the company announced staff redundancies. That won’t trouble the impervious Darling. This after all is reward for saving the banks with taxpayers’ money and failing to instigate bonus restrictions in return.)

Not a cheep of dissent was heard during the indyref from the brave People’s Party about Darling when he accumulated £250,000 while leading their campaign, but I hear they are like hyenas on a legitimate loan of £18,000 from years ago to a man now an SNP MP…such a close correlation between fearties and hypocrites.

I haven’t mentioned the Mighty Broon’s venture into the murky world of bonds where he joins the former head of the Federal Reserve and the European Bank – a group of financial goons who were at the heart of the crash. They deserve each other.

Carmichael’s is the most demeaning judgement I recall on a sitting member – excepting the conviction of ex SNP MSP Bill Walker for wife-beating. It defines him as low-life careerist ready to cheat and lie in order to stay in his seat, dissembling to a Cabinet Office inquiry in the full knowledge that so long as its publication was delayed, he’d be safely re-elected before the voters got the news of his chicanery.

‘We consider that he could and should have been straightforward and candid in his response to the inquiry.  That would have been likely to reveal his involvement in the leak at some time prior to the election, so that his constituents, when voting, would have been in full possession of the facts during the election’ say the judges. Precisely…

The astonishing aspect of this case is that his defence was that he did indeed lie to fool his constituents. He deliberately pulled the wool over their eyes. He admits cheating the voters. The reality is that the knowledge to which they were entitled, yet did not get in time, may well have swung the vote against him. It is the clearest and most blatant act against democracy.

He survives merely because the test in law applied under the legislation chosen by the plaintiffs demands that he tells the lie for a personal reason rather than the political one. They were not convinced he cheated and lied in a way that would lead people to think it was out of character. If he had linked the lie to a statement declaring himself a trustworthy and honest man, it would have damned him. But the lack of that context gave rise to doubt in the judges’ mind and allowed them to decide it was a political ruse instead. But isn’t that exactly why this cowardly man should resign?

Lady Paton writes:’The inescapable inference, in our opinion, is that if the SNP became a less attractive prospect, the first respondent’s (Carmichael) chances of a comfortable majority in what had become a two-horse race in Orkney and Shetland would be enhanced.’ She was satisfied beyond reasonable doubt that the false statement of fact was made for the purpose of affecting (positively) the return of the first respondent as a Liberal Democrat in the constituency of Orkney and Shetland.

In defending himself he has conceded he cheated the people of Orkney and Shetland and is unworthy of their support. In fact, the democratic case against him is stronger today than it was. He squirmed out with the skin of his teeth on the technicality but damned himself out of his own mouth. The statement he made afterwards was the bile of a shaken man, further undermining his stature. Blaming a politically-motivated campaign – check for irony here – operated by ‘nationalists’ contrasts sharply with his unreserved public apologies to voters and the First Minister where contrition was all (ahead of the court case). This was a time for humility not vindictiveness – the case was soundly based and, from the judgement, damn near proved. His arrogance shields him from self-analysis. His reputation is destroyed, the foundation of his election shaken.

There was a chance that his conviction would have drawn a line under an unpleasant episode and helped Liberals in the Northern Isles to move on. That won’t now happen. The stench of his betrayal will contaminate the party’s cause in six months time and leave the final accounting to the voters many of whom will see only one way to even the scores.

The campaign line that ‘Alistair was vindicated’ won’t wash. From his own mouth he played the spiv with the voters. From the court judgment he is a blatant liar who can’t be trusted.

This week has been a reminder of who ran Project Fear and what measure of men they are. Instead of inquiries into Forth Bridge faults, why not a full-blown investigation into quality of political opposition in Scotland? Now there’s a scandal.

‘Indyref2’ debate should be handled with care if No voters are...