This week I completed the eleventh chapter in my forthcoming book ‘London Calling: How the BBC stole the Referendum’.

The chapter’s working title is rather dramatic: Anti-English, Nazis and Crackpots. It focuses on the demonisation of Yes supporters throughout the referendum campaign.

The chapter draws on examples from the past which sought to portray those who backed independence as anti-English and their political leaders as Nazis & intolerant racists. BBC Scotland, although not specifically driving this agenda, played a significant role in promoting the narrative.

The theme of the chapter was prescient. No sooner had I filed it than race and intolerance exploded into and onto the airwaves and pages of our news media.

It’s been quite a few days. Pro-Union newspapers and columnists have turned zombie-like into frothing, eye-bulging anti-Scottish zealots. It appears to have been fuelled by polls which suggest the SNP is on course to leapfrog Scottish Labour in a significant number of Westminster seats.

Much has been written about Allan Massie’s ‘Rivers of Blood’ metaphor in the Mail on Sunday and Steve Bell’s ‘incest’ Guardian cartoon featuring Nicola Sturgeon. Both are indicative of the growing cult of Scotto-phobia that has lain under the surface of UK media for years.

But little attention seems to have been paid to a ‘poll’ apparently commissioned by the BBC. This broadcaster has been promoting results of a Yougov poll that it claims reveals the views of Scots. The subject of the poll is immigration and BBC Scotland is covering the poll not just for one day, but a full week. The headlines from the ‘results’ of the poll have been pretty disturbing. ‘Scots want immigration reduced’, ‘Scots believe immigration damages the economy’, ‘Scots should get job priority, suggests BBC poll’.

BBC Scotland began making surprising claims; one being that there was a ‘big debate’ on immigration taking place in Scotland. Its current affairs programme, Scotland 2015, held its own ‘big debate’.

On the morning radio phone-in Morning Call, presenter Louise White asked employers: “Are you aiming for ‘cheap, cheap, cheap all the time”. Listeners were asked: “Do you think immigrants are good for the economy”. A caller called John told listeners: “The SNP has tried to drive a wedge between us and the English.”

Just what is going on? There is no big debate on immigration taking place in Scotland. The motives for this BBC poll can only be guessed at. On the face of it, it is attempt at persuading Scots that it isn’t just their southern neighbours who are worried about foreigners coming into their country.

One thing is certain though, the decision by BBC Scotland to promote this theme for a full week will influence, or poison, the political narrative in Scotland and may have repercussions for the general election campaign.

But in its over-zealousness to promote its ‘Scots feel the same as British’ message, BBC Scotland has already made a rather embarrassing blunder.

On Wednesday morning a headline appeared on the BBC Scotland news page. It read simply: ‘Scots should get job priority, suggests BBC poll’. The headline was based on a question asked by the BBC survey. The problem was that the question didn’t ask about ‘Scots’ at all, it asked about ‘British’. I tweeted an image of the misleading headline. Within half an hour of my tweet, the headline was altered to: ‘Brits should get job priority’, suggests BBC poll of Scots.

BBC Scotland had replaced the word ‘Scots’ with the more accurate ‘Brits’ – why ‘Brits’ and not ‘British’ is unclear. However there was another subtle change, the ‘BBC poll’ was now a ‘BBC poll of Scots’. 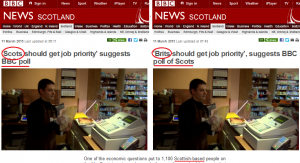 Yet according to Yougov, the pollster had surveyed 1100 ‘Scottish-based’ people, not explicitly Scots. Could the make-up of the survey have skewed the results? It’s not unreasonable to suggest that people who have not grown up in Scotland, but recently moved here, may have taken part in the survey. These respondents may have presented views cultivated from experiences outside Scotland, but introduced into the survey.

One headline claim pushed by BBC Scotland was that most Scots felt immigration damaged the economy. But those who felt immigration helped the economy was only one per cent lower. This is a statistical dead heat. But what if the difference is explained by recent incomers? Of course it could have worked both ways. Incomers may have in fact influenced the positive figure.

BBC Scotland has used licence payers cash promoting a ‘debate’ Scotland appears not to be interested in. In doing so it may in fact be causing the very effect it claims to have uncovered.

The corporation behaved appallingly during the referendum campaign. My book will give a devastating account of the BBC’s questionable behaviour throughout that period and the years leading up to the SNP’s 2011 election victory. The wider Scottish and UK media are now fighting referendum2. From my standpoint, BBC Scotland is already mobilising for this second barrage.

Ask yourself who benefits from BBC Scotland’s week long assault on immigration? The inclusive SNP or the London-based parties who are pursuing a Euro-sceptic UKIP driven agenda? 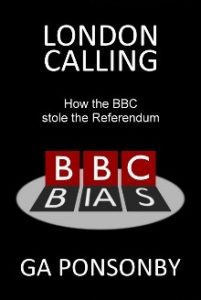 London Calling: How the BBC stole the Referendum by G.A.Ponsonby can be pre-ordered here. The book is due to be published in early April. 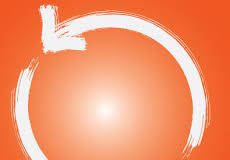