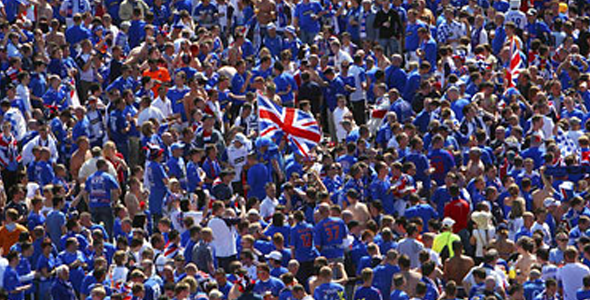 There’s no denying it, the Rangers v Celtic fixture is one of the most exciting in the world. The atmosphere goes beyond anything offered up by other British derbies. When Graeme Souness first arrived at Rangers in 1986 he ruffled feathers by describing the game against Celtic as “just another match”. How quickly he changed his tune…

In another sense, of course, the Glasgow derby is an embarrassment to Scotland: steeped in bigotry, ancient hatreds and puerile taunting.  There’s certainly no getting away from the ugliness of it all.

That’s all fine and well, but the “problem”, such as it exists, is larger than Rangers and Celtic. They may be the most concentrated of examples, but ‘hatred’ is an epidemic throughout football, as fans across the UK compete to see who can say the most venomous things about other fans, players, managers and commentators, abetted by social media and forums.

In 2012 myself and the writer Rodge Glass – who’d just written an excellent novel called Bring Me The Head of Ryan Giggs about a Manchester United fan’s psychotic obsession with the team captain – addressed an audience at the Latitude Music festival in Suffolk, on the topic of football. Discontent was rife among the varied supporters about the way in which football is run, about how alienated fans feel from the overlords of the game. One middle-aged man raised his hand and said: “It seems to me that fans now hate each other much more than they used to. Why do you think this is?”

“Thatcher,” I replied, “Divide and conquer. Oldest trick in the book.”  The brisk applause in the tent suggested I couldn’t have been far off the mark.

Let me lay my cards on the table: whenever Rangers play Celtic I want to see Rangers win.  This is a feeling instilled in me at childhood, which carries over into adulthood, an instinctive response which I can’t help. Celtic might be ‘the enemy’ in a footballing sense, but for me that’s where it ends. Irish folk songs aren’t to be feared and fought against but welcomed, as part of the rich, multicultural tapestry which makes up Scotland. I don’t have any particular fondness for the monarchy, but Rangers fans are entitled to their loyalties.

I simply do not see the necessity for placing a football team above issues of class solidarity. The livelihoods of ordinary Rangers and Celtic fans are threatened equally by an out-of-control capitalism and a rapacious British state. Flying the Union Jack will not protect Rangers fans from the ravages which the British establishment will exact upon them through austerity (indeed many of them forget that it was Her Majesty’s Revenues and Customs who hounded Rangers to the point of liquidation). It’s unfortunate that it takes tragedies such as the Clutha Vaults accident or the George Square bin-lorry clash to remind Rangers and Celtic fans of their common humanity. If only they could unite so easily against their rulers.

So my feelings about Sunday’s clash are this: I want to see a fast, end-to-end game of football which Rangers will ultimately win. Beyond that, I just hope that Glasgow behaves itself.

This is the contradiction about the Rangers v Celtic match. It’s more than a game, yes. But it is also only a game.

Yes voters and the temptations presented by Jeremy Corbyn