In an astonishing display of arrogance and of failure to follow the guidance that the Palace had been advised of by the Scottish Government and Scotland’s health professionals they came anyway.

This was apparently sanctioned by the Queen who as a ‘constitutional monarch’ is expected to follow government advice and especially health rules during the most severe pandemic we have experienced in over 100 years. A Palace spokesman attempted to justify this extraordinary behaviour by maintaining they had done so for work reasons. That they were “essential workers”.

Work and Royals are not natural accompaniments. They were not carrying out essential maintenance, providing an essential service or any other pandemic useful function. They came to meet people which is not work and precisely what everybody must not do during a pandemic that has returned to dangerous levels again in these winter months.

The brief Scottish trip obviously saw the Royal duo fall flat on their faces. After arriving at Waverly, where they were reported by concerned citizens to the police for breaking Covid travel restrictions, they were taken by car to a large shed at Newbridge where ambulances are stored until required. The images from this gloomy shed indicate they met no more than a handful of individuals.

There’s was an appalling example which others are very likely to follow. Scotland welcomes visitors but not during a health crisis. We have long had reports of camper vans seeking out Scotland’s remote villages, endangering local people who tend to be older in rural areas.

Next stage on the trip was Berwick where the masks came off, social distancing ignored and reindeer hired for the trip were unloaded to the delight of local children. The North East of England has been one of the worst affected areas of England in recent weeks.

The reindeer might have been a nice surprise for the children of Holy Trinity First School in Berwick but it does not sit well with the headline on concern over a shopping surge in the North East of England.

If Royals so openly flout rules designed to protect the population then many will conclude they are surplus to the country’s needs. Even if the Palace and the Queen thought this would be a good idea the two culprits should have been capable of making their own judgement and cautioned against travelling against the advice of health professionals.

Has it totally escaped the Royal household that people are meeting on Zoom and Skype to keep in touch and obey the advice to only meet physically in very small groups?

Downing Street first referred media enquiries to the Palace but have since decided the Royal couple’s trip is fantastic.

Welsh ministers are also in no doubt that crossing the Welsh border is a strict No No. Wales currently had the highest number of new cases of the 4 nations yesterday at 2021 compared to 677 in Scotland. London was even worse recording 2,450 new cases amounting to 21% of the total for England. Really not a time to be prancing around the country

The planning for the Royal Covid Express was a complex piece of organisation requiring multiple arrangements – security services, Network Rail, management at individual stations along the route and contacting local groups to set up meeting locations and attendance. This was not put together in 5 minutes yet the Scottish and Welsh governments were only given notice a couple of days before the train was set to puff off. Very clear this was intended to be kept under wraps until the last moment and devolved administrations sidelined 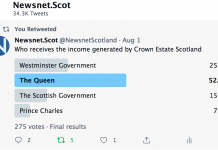 3 wrong answers – not a brass farthing

Royal Snub with only 13 street parties planned for wedding

Royal Snub with only 13 street parties planned for wedding

3 wrong answers – not a brass farthing