What did you think you were voting for? In September 2014 the question on the ballot may have said independence, but forget the terminology for a moment. What it meant was: Do you want Scots to have the power over their own lives or do you want to leave it up to whoever is in charge in Westminster?

Now you may have looked at nice David Cameron and thought he’s not so bad. I’ll go with him. But that’s as stupid as not voting Yes because you didn’t like Alex Salmond. It was a vote on running the country of the future – you know, the place your kids will live in and their kids. In case you hadn’t noticed governments change, politicians come and go, ideas develop and fade. The point was to ask yourself where are the best decisions likely to be made in your interests – Edinburgh or London? Who’s likely to have Scotland’s interests closest to heart – Scots at Holyrood or an 85 per cent English Parliament?

Did you honestly never consider that events might alter the course of history? Did you miss the barrow boy anti-anybody-but-England bile of UKIP? Did you ponder what kind of person Iain Duncan Smith was? Or Boris Johnson? Were you listening to what they were saying?

There was an election after you voted No in 2014. It all but wiped out the voices of Unionism here. This was a message as unambiguous as an iceberg. It said to the London government that we were in revolt. We’d had enough. The referendum vote was a warning – one that could be repeated and we were now saying from the far North to the Border that we demanded real change this time. We were sick of constitutional complexities and double-speak. This was the last chance – deep, permanent, comprehensive devolution of powers to put an end to the resentment or the drums will start up again.

Instead of mature discussion, we got EVEL. Every amendment to the legislation based on the Smith irrelevance was ignored. We live in a ‘nation’ where a single MP, perhaps the most personally unimpressive individual ever to hold ministerial office, represents the entire elected strength of the State. What he says counts more than the First Minister’s voice, more than your opinion, more than the entire electorate of Scotland. We have a government representative who has said that the country he speaks for does not exist in law. He has said it is not his job to be Scotland’s man in Cabinet.

He has though led a piece of legislative chicanery which purported to guarantee Holyrood’s place in UK decision-making by making it the most powerful devolved parliament in the world. Smith declared that the parliament should be ‘made permanent in UK legislation and the Sewel Convention put ‘on a statutory footing.’

This was unctuously portrayed by Mundell as a major and meaningful concession.

But the wording made clear it was no such thing. They are political, not legal considerations, as the Supreme Court has duly ruled.

Did you yearn to believe them? Do you console yourself by pretending the Theresa May and her violent anti-EU manoeuvre is really listening to you? Forgive me, but if so, should you reconsider your own mental competence? What does it take to make you realise that as a Scottish resident and, collectively as a nation, you are a second class citizen in your own country? Are we now so filled with self revulsion that humiliation has lost its meaning? There are intelligent and wise people I know who believe fervently in Scotland and England hanging together and truly find independence an alien creed. If you’re one of them, how do you look at this judgment from the highest court in your ‘United’ Kingdom which says loud and clear your government believes you to be unworthy of consultation – so far beneath contempt that even with the strongest devolved government in the world and a resounding vote to remain in the EU, you will be disregarded – swept aside like crumbs from their table? Remember, this is their view too of people of the other nations of the UK. The United Kingdom? This is a government that is trying desperately to prevent submitting its plan to democratic scrutiny in parliament – that is being dragged into using the time-honoured process of representative democracy. Such epic arrogance was never going to accommodate anything as insignificant as Scottish opinion.

And this is what you voted for.

I grow tired of the outrage of those who wheedled their way via the media through the referendum by placing their faith in British promises of fair play and somehow if we stayed loyal, the honest yeomanry of Olde England would see us right, squire. They may not have wanted independence nor seen its necessity, but in their inner tortured soul did they really think the British would cede what Scotland wanted? All experience points the opposite way and they concede the least they can get away with. Even the tax raising powers are devised as a trap by funnelling revenue raising into income tax only so as to become politically unpopular.

To the Westminster parties, we aren’t a country on a map – we are a board on which a game of politics can be played. First to screw the SNP is the winner. Call it Snakes and Ladders.

From 7am that day in September until 10pm we held the power to control our country, our destiny, if you like. When you voted No, you handed it all back – to people who couldn’t care less. Oh sure, they’ll go along with you but only until you demand something they’re uncomfortable with. Then they’ll give you a sad wee look and say: Nah. Doesn’t suit me. End of…

We’re in this mess now because of your vote, however legitimate you thought it was to turn down your own country’s independence. Perhaps it was because of those broad shoulders that would take the strain. Well, those shoulders are shrugging at you today.

I can only think that as a No voter you pretend none of this really matters and it’ll turn out ok. And whatever disasters befall Britain, independence was always going to be worse. If so, it confirms the view I expressed right back at the beginning when the campaign got going – that voting No was a declaration that Britain was your real country, and Scotland second. After this statement of English superiority within the UK and a rejection of the rights of the other nations to be heard on the defining issue of the day, you still turn your back on the self-respect that independence represents, you are turning your back on Scotland. That is, you are expressly rejecting a Scotland that can breathe as a nation not just an administrative sub-region, one that can exercise its own version of democracy and reflect the wishes of its people. Frankly, it’s getting to the stage that submitting to this is pretty much admitting that Scotland isn’t a country at all.

Time to take a look at yourself. Look at your country and what’s being done to it. Consider your children’s future in a place where the government says you don’t matter…outside the world’s biggest market and the most integrated fusion of westernised democracies. That is, if Scotland still means anything to you. Burns Night would be a good time to start.

Sweet success means Scotland will never be the same again

Why I’m giving both votes to the SNP rather than a... 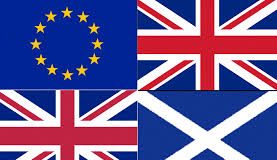