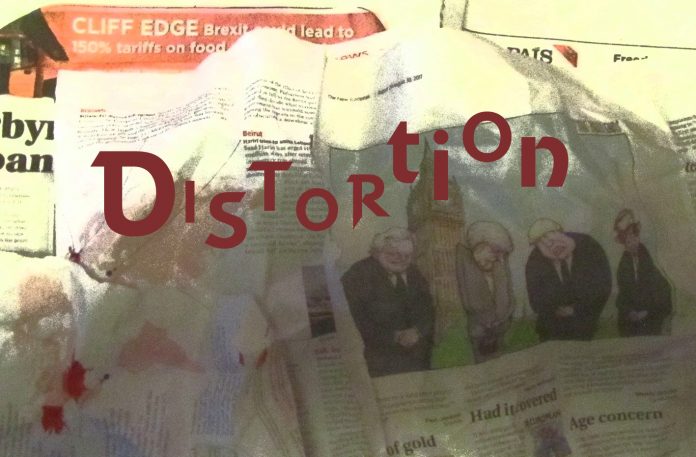 I’ve never believed the media lost us the 2014 referendum. That’s deflection and avoidance of responsibility. But they played their part. And having had our eyes opened, we just can’t stop looking. It must be a torment to find your journalistic efforts nit-picked on the net, corrected and derided, not to mention you yourself decried as an agent of Unionism. I sympathise.

But then there was always criticism of the Press, it just didn’t surface the way it does today. It lay hidden in corners of contempt and festered, erupting now and then in a withering Letter to the Editor. Although in my experience, the dignity of the journalist’s trade is sufficiently fragile to prompt the binning of any complaint deemed too close to the bone. Nowadays no Editor can prevent the tirades of the aggrieved from reaching not just their exalted office but spreading across the land.

The news has never been a perfect thing and is a continually evolving resource subject to judgment and analysis by professionals. You could spend to Doomsday debating what constitutes news and, in a real sense, it is almost entirely defined by what an Editor decides to publish. That is one definition – a newspaper printed it, ergo it is news.

Only we know that’s nonsense. The photoshop distortions on the front page, the pointless drivel about so-called celebrities, the overstating of a simple phrase into a screaming headline, have robbed journalism of a swathe of credibility. There is also the adjustment to a digital world which has been painful, not just the decline in hard copy readers and ad revenue but in deciding what people want to know when the world is instantly at their fingertips on a keyboard, be they in a farm kitchen in Angus or a croft in Lewis (broadband notwithstanding).

We thought live television would be the instant outlier that would redefine news but it’s now as obsolete as VHS as live streaming and global access to every known news source sit snugly in our pocket on a phone.

So deciding what consumers want in an age of all-consuming information is much tougher than it was when far-flung correspondents called in from a phone box with the latest.

Everybody now thinks they know what news is and they waste no time telling you. But, revealingly, it often comes down to their own personal interest or partisan beliefs. And if your product doesn’t reflect that, you are denounced. There are many voices in wee Scotland indignantly unhappy with the media and wishing it all would burn in Hell. Well, I’m indignantly unhappy with the state of Scotland but my response is not to want it engulfed in flames in Hades. Our movement doesn’t follow Pol Pot and seek Year Zero absolute solutions.

Like everything else in Scotland it is, as they say, what it is. We are where we are and wishing it were different cuts no ice. It may be that the lack of an active campaign or a key date to aim for, that ire needs something to focus on and if there’s an ever-present, it’s the media, publishing every day with hourly bulletins. It’s a dripping roast for resentment troughers. And we can all play.

We shouldn’t though ignore what quality coverage there is and the range and insight of commentary. Only ever seeing the negative is not the approach we take to Scotland itself. We seek to persuade and transform, not eradicate. Journalists are not part of a conspiracy and if sometimes they sound aggrieved, it’s probably because there is only so much they can take. Hysterical attacks and demands that they lose their jobs and that their titles disappear merely confirms their existing prejudices about the nature of some on the Yes side. It probably makes it easier to find a bias against Yes as a result. They are human after all.

It doesn’t need conspiracy, only mindset, to think the Christmas Box fiasco was acceptable behaviour. As Professor Murray Pittock of Glasgow University said: Just printing political party press releases is disgraceful. His colleague Professor Iain Docherty, said we need better journalism and respect is being lost.. Noticeably, not one fully paid-up professional journalist employed by a mainstream outfit justified thePress release scam. The only reaction I saw was personal attacks on me for publishing it– the same behaviour journalists complain about from Yes.

And how predictably sad to see paper after paper picking up and repeating the Tory fabrication about the flying of the Union Jack – without the most basic check of asking if it were true. That is a failure of journalistic standards and shows how desperate some are to generate outrage. Any old garbage will do.

And some stuck doggedly to it even after the First Minister and her predecessor had corrected it.

It has been a wobbly few days after the other non-story of a David Torrance look-alike made fools of the papers. Someone tweets for a joke, it ‘becomes news’ and an entire narrative is developed that this is a secret plan for Nationalists to attack the freedom of the Press – a Loony Tunes fantasy given wings by the absurd Alex Cole-Hamilton and Jo Swinson. A front page story? Only in the kailyard, I’m afraid. It must be clear to all that the media have few concerns about being answerable to the regulator.

For a glimpse of how different it is elsewhere try this : Sweden, Finland, Norway, and Denmark are consistently ranked highest in the world for both freedom of the press and participatory democracy. The Scandinavian population has among the highest news readership in the world, and can choose among the world’s greatest number, per capita, of local and national newspapers.

They sell more papers and they have no statutory regulator. Instead the media themselves recognise the value and importance of accuracy and fairness which sustains their high circulations. Therefore they care about the quality of journalism and collectively judge their own colleagues when complaints are made. It isn’t threats that make this happen, it’s the common self-interest of the industry and its ambition to be respected. Is that your impression of the Scottish media?

But none of this gets us out of the woods in terms of giving a message that is positive as we head towards an uncertain future in just over a year’s time. There remains a powerful background buzz of concern that rebuttal has not been strong enough – that deliberately misleading information is published in some outlets without official complaint. However, I think it is possible to detect a stirring in this direction at government level with hints of a more robust approach – the FM’s Twitter denunciation of the false flag story being one.

There should not be an attack on the media as a whole as the government tries to persuade more Scots on to its ground – as some would want – but targeted rebuttals of incorrect information and, I think, misleading ‘news’ stories. The government is entitled to expect that official information released for publication should appear accurately – that’s the role of the media. It doesn’t mean simply repeated and it doesn’t mean the news top line should be the same. It means that a fair and accurate assessment is reported. It is open to the paper separately to give its analysis and comment on the content without interference so its editorial line, on for example independence, comes through. Too many articles are distorted to a pre-determined line designed to influence the reader than, in the first instance, to inform. I know this is naïve but that is what a properly functioning media would look like.

For balance, the members of the old media should not wish away the new media either. There is already a degree of intertwining to mutual benefit – Angela Haggerty of Common Space is also employed by the Herald and must have her own dressing room at STV, Paul Kavanagh is in the National, Bella produces a magazine with the National and my mate at Newsnet Maurice Smith makes programmes for the BBC and writes in the Herald. There are other examples. In that sense Scotland has one wide media field and there is competition – and acrimony – within it.

Neil Mackay of the Sunday Herald tweeted that his front page – about Keith Cochrane of Carillion assisting at the Scotland Office (and getting sacked as a result) was a reason we need real newspapers. I agree and think it’s a pity there isn’t more of that kind of work being done in the Press. But I couldn’t help noticing that myself as the alternative media tweeted three days before his story that Cochrane was in These Islands AND had a role at the Scotland Office. I just missed off the Exclusive tag. That’s news for you!

As SNP and Tories slug it out, Labour slides towards greater...