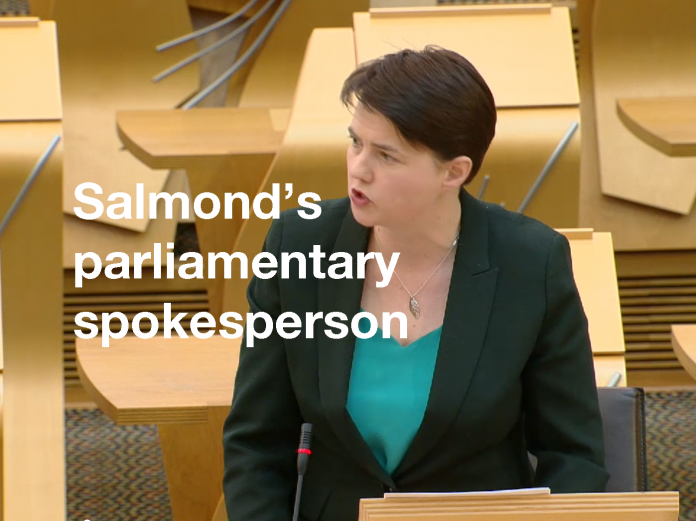 Meanwhile the blogs gullible enough to make themselves susceptible to Salmond’s drip drip conspiracy campaign are either drawing back or doubling down.

In the previous piece we highlighted Salmond’s 2017 claim that David Davis was “the acceptable face of the Brexiteers’ Now he has become Salmond’s acceptable face of Nicola bashing. None of Davis’ predictions for Brexit turned out to be true but the Westminster old pals network is alive and well and here he is again blindly following Salmond’s make believe world and off to The Spectator who happily carried the print version.

The Tory unionist cluster round Salmond, having now recruited spokesperson Davidson, are circling the wagons in an orchestrated attempt to prevent the SNP and others, most likely the Greens, delivering our independence parliament in May. Mr Salmond is securely corralled inside the Tory unionist agenda.

Some independence supporters and blogs are so brainwashed by the Salmond dubious narrative that they still can’t see the new chapter in Scotland’s history that we must deliver on 6th May. They remain intent on damaging the SNP and the independence movement to skelp Scotland into permanent subjugation of English far-right nationalism. Whilst Davidson gets fitted for the ermine we have to ask if Salmond has effectively donned a union flag suit? Such is his twisted anger and wrath.

Newsnet is a news site as well as a campaigning site for Independence and Scotland returning as a sovereign member state of the European Union but we also have to provide balance and we think this diagram demonstrates the balance of public opinion in the Sturgeon Salmond skirmish.

Across the political spectrum of those polled 65% approve of Nicola Sturgeon as First Minister against Salmond’s approval rating of just 15%. Nicola Sturgeon’s negative rating as First Minister is -35%, no doubt reflecting those supporting unionist parties. Alex Salmond as a private citizen with a political past gets a 15% approval rating against an overwhelming -85% negative rating.

First Minister: “Scotland must become a fully participating nation in the...