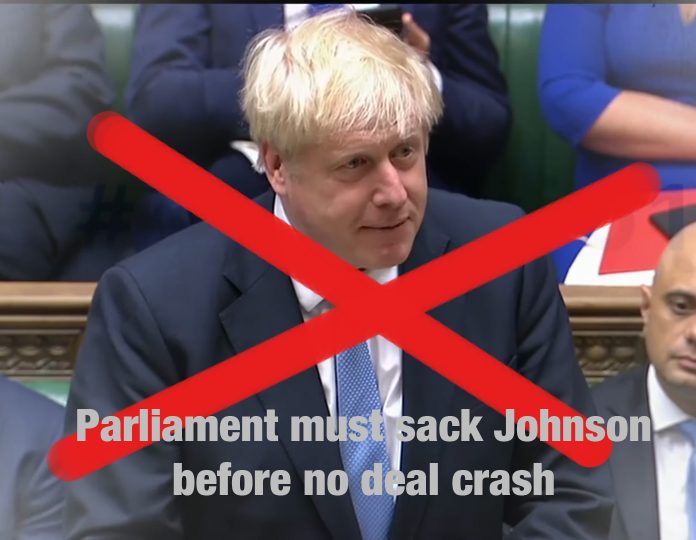 The interests of centre politics in the UK and in its constituent nations might be served best by holding a hand out to those on the centre right of the Conservative Party who are either pro Remain or, in most cases strongly opposed to leaving the EU without a deal. The Tory party is broken. Johnson in seeking to win back voters who defected to the Brexit Party is making the Tory party the Brexit Party through a reverse takeover.

Politicians in a developed and working democracy have always talked across the divide. Never was this more important because it is the width of the divide that has given rise to the level of government party dysfunction. If there is still a centre right in the Tory party that wants a proper solution to the Brexit crisis it has to make a stand now.

For someone who has never voted conservative and is passionate about Scotland becoming an independent state within the EU this might seem a little strange. But this does matter because the Johnson government has no choice but to move to the hard right drawing all of centre politics to the right as we have seen in parts of Europe and in Trump America.

Meanwhile in and around Westminster, in recess, there is ill-considered talk of a ‘government of national unity’ involving the opposition parties and conservative rebels opposed to Johnson’s plans to crash out. A bit of fresh thinking is needed because there is no national unity, neither behind Johnson’s explosion when midnight 31st October ticks over to one second past nor total consensus on the way forward through a temporary government whose only purpose is to extend Article 50 and call a general election.

If parliament, as represented by different parties, is to take control then that should be a Parliament Government – a term that has democratic credentials by virtue it can form a temporary majority government.

Johnson says he will not resign in the wake of a No Confidence vote as that is merely a ‘convention’ and Johnson does not do convention. Johnson makes it all up day by day anyway so having a make it up ‘constitution’ suits him down to the ground. Much will be down to ‘procedure’ and the role of the Speaker and the action raised in the Scottish Courts by a group of cross-party MPs.

Wherever we are individually, or in party collectivism, on the political spectrum if that is not on the new far right, then we are obliged to think and help those on the centre right hold their ground and encourage them to work towards a collective position that strengthens their opportunity to exert the greatest influence against narrow far right English nationalism.

It is for the 40 or so Conservative MPs opposed to a No Deal Brexit to determine how their aims are best achieved. First they have to accept the Conservative Party, as they have known it and how it has survived for more years than any of the other parties represented at Westminster, is a broken shell and like Humpty Dumpty can never be put together again as the party they joined.

That is not so difficult given the ERG operating as a party within a party and now backseat and front seat drivers in the Johnson government. That is not to say it is easy but anyone entering politics and believing they would never have to make hard choices has chosen the wrong profession.

The easy way out is to stand aside, like those who have decided they will not stand at the next election rather than fight deselection or remain committed to a party that is now fundamentally different to the party they joined.

There are lessons from recent political history to indicate the best means of following through on how they want the Brexit saga to end. The choice is simple by learning the lessons of Change UK as it morphed through different names in search of a coherent identity with others opting for the Lib Dems as it shredded itself like chards on a Florida voting card.

If centre right conservatives stand behind being Conservatives then that is what they should continue to be whilst disassociating themselves from former colleagues on the far right march, consolidated under Boris Johnson.

Purely with the intention to show goodwill and with no ulterior motive, I suggest they form the Conservative Centre Party rather than split off in all directions or give politics up as a bad job. A bit of cohesion never did any group or party any harm. However this works out in England, fragmentation is unavoidable but they might achieve a least worse outcome – a departure from the EU that includes a transition and some sense of order.

A Conservative Centre Party need not fear a lack of funds to fight the coming general election. They have enough friends with deep pockets in the business world who want to see a smooth transition offering a more stable environment in which they can continue to survive if the UK leaves or the vote is put to the country again.

Scotland has a clear sense of direction, looking beyond party, the movement towards supporting independence is well under way. Whilst many independence supporters advocate leaving England to sort out its own problems this is not a practical solution until we are no longer stuck with the Methuselah of parliaments and its ability to interfere and control Scotland.

With independence Scotland will engage in positive international relations with all the nations of these islands, the European Union and in every other forum where nations come together to resolve issues between them. Sadly that degree of respect does not exist between England and the other nations within the union. Scotland has been ignored throughout the whole Brexit fiasco. Indeed Ireland, an independent country for close on a century finds relations with London hard going and the EU has decided there is no basis for discussions based on PM Johnson’s stance over the Backstop.

There is no evidence Boris Johnson has the support of the country for his position that the Backstop must be shelved. He is playing a dangerous game with peace in Northern Ireland and knows there is no basis for a new deal with the EU. Leave UK never said anything about a No Deal exit at anytime prior to the vote.

Can a parliamentary majority be found to block No Deal? It is not going to be easy and the best chance is if government party MPs opposed to No Deal get together and join in the campaign. A new Conservative Centre party is the best chance of getting the numbers.

Scotland cannot escape the dire consequences of No Deal when midnight chimes end on 31st October so the SNP must continue to work with others at Westminster to help bring Johnson’s government down even if that includes conservatives on the centre right because they have the extra numbers to make stopping No Deal a real possibility.