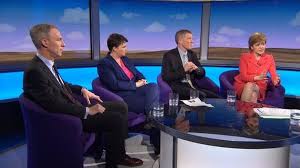 Newspaper columnist Iain Macwhirter has rushed out a new book – Tsunami – covering the general election campaign. Below is an extract, covering erstwhile Scottish Labour leader Jim Murphy’s Quixotic charge at the SNP and the current fall-out following his resignation.

On television debates, Labour leader Jim Murphy joined with the Conservatives’ Ruth Davidson and the LibDem leader, Willie Rennie, in barracking Nicola Sturgeon as if Better Together were still in existence. Murphy claimed that the SNP intended to impose another independence referendum as well as Full Fiscal Autonomy, a claim Sturgeon denied.

The nadir was the BBC Scotland Sunday Politics debate on 12th April, styled the ‘stair heir rammy’ in the press, in which Murphy and the other unionist party leaders talked over an exasperated Nicola Sturgeon to such an extent that the entire discussion became unintelligible. Except, that is, for one unfortunate comment from the Labour leader who said audibly that there would be ‘no need for further cuts after 2016’. This was not Labour party policy. The next day the Shadow Chancellor himself Ed Balls hung Murphy out to dry by commenting: ‘there will be cuts in non-protected areas.’ Labour’s business spokesman Chuka Umunna added: ‘The leader of the Scottish Labour Party will not be in charge of the UK budget.’81 From there, there was no recovery. Wile E Coyote had finally run out of road.

UK Labour was clearly not in any mood to help Jim Murphy. It had its own problems with the Tories spreading a scare about the ‘nightmare on Downing St’, if Ed Miliband entered Number Ten with the support of the SNP. Such a government, said David Cameron, would not be ‘legitimate’. This was nonsense of course, because any government is legitimate if and when it commands a majority of votes in the House of Commons. Indeed, the first ever Labour government in 1924 was just such a minority. However, rather than contradicting Cameron’s misleading account of the British constitutional practice, Ed Miliband seemed to endorse it. On BBC’s Question Time Special on 29th April, the Labour leader announced that he would ‘rather not govern’ in the UK if it meant ‘doing a deal’ with the SNP.

This offended even many non-nationalists in Scotland. Mr Miliband appeared to be saying that it was legitimate to ‘do deals’ with the Liberal Democrats, the Social Democratic and Labour Party, or even the Northern Irish Democratic Unionist Party, but not with the duly elected representatives of Scotland. In any situation where no party has an overall majority it is the duty of all the parties to seek arrangements that could form a stable government. That is an essential requirement of any par- liamentary democracy. It appeared to many that Ed Miliband was endorsing the Tory claim that Scottish MPs did not have legitimacy in the House of Commons if they voted against a Conservative Queen’s Speech.

This couldn’t have been more damaging to the Scottish Labour Party in a UK election marred by shocking anti-Scottish rhetoric from Tory MPs like Owen Paterson who said that ‘the Scots’ were using English tax payers as ‘a piggy bank’. Meanwhile, Nicola Sturgeon was becoming a huge success in the UK debates. It was turning into Labour MPs’ worst nightmare. Some simply gave up. The Glasgow MP Tom Harris took to posting vines of himself dragging his dog across a carpet saying that he was ‘bored with politics’. Whole swathes of Scotland’s Labour campaigning virtually stopped as the party focused its resources on defending the seats of big names in the party like Shadow Scottish Secretary Margaret Curran in Glasgow East, to the dismay of party workers in lesser constituencies.

The election night itself was heartbreaking for Labour as safe seat after safe seat fell to the hated SNP. A clean sweep in Glasgow; all of Tayside; nearly all of Edinburgh. Scottish politics is tribal, and the enmity between Labour and SNP is intense despite many of their their policies and much of their social philosophies being broadly similar. The atmosphere at the counts in the big cities was tense and acrimonious – though peaceful. The nadir came at 4.00am on BBC Scotland’s Election 2015 programme when Ian Davidson – who had famously said during the referendum campaign that all that remained for the victorious unionists was to ‘bayonet the wounded’ – stuck the bayonet in Murphy’s back. ‘He should do the honourable thing and resign,’ he said.

But Murphy, unlike Alex Salmond, didn’t do the decent thing. He clung on for over a month during which he sparked a near civil war in the movement by accusing the Unite leader Len McCluskey of being the architect of Scottish Labour’s mis- fortune.87 It was an awkward exit and infuriated those in the party who were hoping for some measure of reconciliation after defeat. But Murphy’s parting shots did at least force Labour to address fundamental questions about its constitution. Was it acceptable in the age of one member one vote for the Scottish leader still to be elected by an electoral college in which one third of votes were assigned to the trades unions? Could Labour in Scotland continue in business dealing with the left-wing rhetoric of the SNP while the UK Labour Party appeared to be going in the opposite ideological direction?

Labour in Scotland is now in a very dark place, as the gloomy Labour MP John Cruddas might have put it. Kezia Dugdale could undoubtedly make a worthy leader, but at thirty-four she is inexperienced. She only entered parliament in 2011. She is also, ironically, a member of Len McCluskey’s Unite. Labour clearly cannot continue in its present form and she has a huge task making the decisive break from the past that is needed if the party is to regain the trust and support of Scottish voters. It may be that only with a name change and a new constitutional relationship to the UK party will Scottish Labour be able to remain in contention in Scotland.

Tsunami – Scotland’s democratic revolution, by Iain Macwhirter, is a Cargo/Faber ebook. There are plans for a print version later this year. More details here.