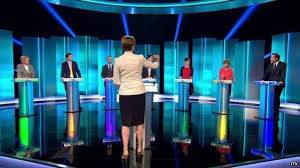 Part of the framework of British politics has been the illusion of exclusive leadership in which only the Big Boss has a voice of any meaning and is the only one entitled to bandy words with Opposition Head Honcho.

The stag rut of PMQs is the perfect tableau to illustrate this phenomenon as they shout and point, two swords lengths from each other, surrounded by the baying harem of those about to be mounted.

That the leadership seems always to be the very epitome of respectability and utterly and safely conservative induces the feeling that politics is spearheaded by a select few chosen and vetted by an Establishment committee – the Committee on the Appropriateness of Appearing in Public Life.

If this carefully crafted image cracked when two-party politics collapsed five years ago, then this campaign has splintered it completely.

The seven-handed leaders debate laid out like a spreading pack of cards the full array of options now available to voters. And – shock – some of them are WOMEN…not imperious executive women but real women with ordinary backgrounds and state educations fired up by the need to act against the injustice and surreal dysfunction that passes for a way of life. These are women cut from a different strata than the manicured dames of the media world – women who look normal, uncontrived and lived…women you can relate to and whom you admire because of what they say, not how they look.

Amid the stagey answers and the hencoop cackle of claim and counter claim, the truly striking thing was the domineering aspect of the be-suited males forced to adjust their turbo arguments in deference to female company where their standard posturing suddenly seemed as inappropriate as locker room banter.

Their casual presumptions about austerity and the need for cuts; the acceptance of absurdities like nuclear weapons and their expectation of a verbal fistfight among the big boys looked, under the glare of female scrutiny, as limp as drunks swinging haymakers in the pub car park.

There was astringency in the sharpness of Sturgeon and in the lyrical daggers of Leanne Wood that cut through the windy rhetoric of the men so used to playing this as a game without meaning. There was an air of men clutching pints and putting the world to rights being interrupted by women demanding which of them was still capable of driving home…a clashing reality from those focussed on common sense and tired of the braying male know-alls.

There was never likely to be a winner in a seven-way contest and there was no way except your own prejudices to determine that. But Scotland could take satisfaction that it had a bright and persuasive champion radiating conviction and visibly comfortable in the spotlight sticking to her principles while reaching out to a wider UK.

Judging by the resulting Twitter storm, Sturgeon succeeded in rendering idiotic the Unionist media idea of the Nat threat and presented instead a modern, leftist image fitting perfectly with the pleas of progressive Britain for a sensible, unashamed shift to the Left.

Who won? The women did and, if the votes fall the right way in five weeks’ time, the women of Britain might also think they are winners too now they see how airily the Men Only Club can be put in its place.