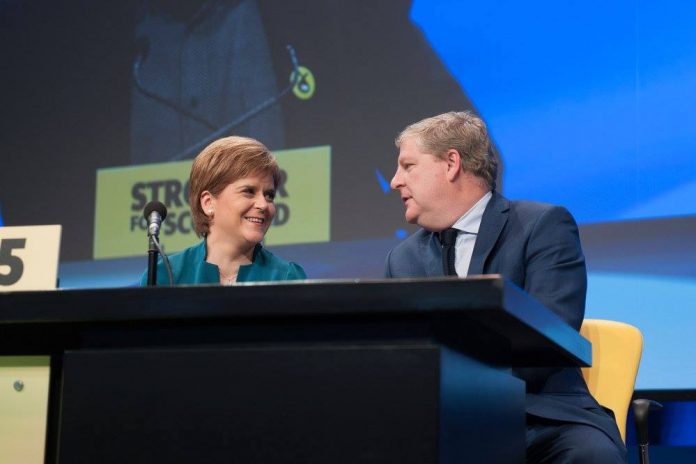 Hugh Kerr reflects on the SNP conference at Aberdeen

Last week I alerted readers that there might be trouble at the SNP conference, but that the leadership – with with the use of the Standing Orders Committee – would probably manage the conference and get away with it. Well I was wrong.

Firstly there was a serious challenge to the leadership over fracking and they were almost defeated. Let me explain why this occurred.

There were a number of resolutions and amendments submitted on fracking from branches, all of them were in favour of a total ban – a position which is shared by six out of 10 Scots, according to a new opinion poll in The Times.

So the Conference Arrangements Committee chose a resolution and, as the delegate from Leith informed the conference, they deliberately changed this resolution from a total ban on fracking to one which supported the SNP government position of a moratorium. This was extraordinary, even in the heights of Blairism the Labour Conference standing orders committee would never have dared to do such a thing. Maybe Jim Sillars’ jibe about the SNP being like the Central Committee of the Soviet Communist Party has an element of truth after all!

Clearly, the conference clearly didn’t like this manipulation and almost every speech was in favour of a total ban on fracking. Many speakers also indicated they knew what the leadership were up to, and they didn’t like it, and that they would refer the motion back, as it did not meet their original wishes. It took a plea from the Leith delegate who – while admitting their resolution had been nobbled – asked the conference to pass it. In addition, Tommy Sheppard MP (one of the best speakers among the new intake of MPs) made a strong speech of support, but making it clear that at the end of the moratorium we would all come out for a total ban on fracking.This was sufficient to defeat the remittance of the resolution but only by 550 to 420 votes, a rather narrow squeak.

If the leadership thought they had got away it, the very next debate on land reform was to be their undoing. Again the Standing Orders Committee had laundered the agenda to make sure that no resolutions or amendments went beyond welcoming the SNP Government’s Land Reform Bill currently before the Scottish Parliament. Most peakers from the floor made it clear they thought the Bill, while a good start, was not radical enough to deal with the most unequal land ownership situation in Europe. So they moved it be remitted, that is to be sent back so the SNP must think again. Despite a plea from the Minister for Land Reform the conference voted decisively to remit the motion. Delegates had decided they weren’t going to be fooled twice in a row!

What does this mean for the conference and the SNP? I think it shows that many of the new members of the SNP are more radical than the leadership and what’s more they are not going to be fobbed off by procedural measures to avoid debates. This is very important, as of course it wasn’t just fracking and land reform where the conference was “managed”, but on TTIP where the radical motions and amendments were excluded in order to support the current position. Of course the two big elephants not in the conference room were the next referendum and NATO.

On the referendum issue Nicola Sturgeon may have assured the conference for present that she will deal with the referendum up to next year’s election. However these new members who came into the SNP out of the YES campaign are not going to be put off by vague promises of “sometime-never” for the referendum. Can  there be a better time for a second referendum than during a period of what is likely to be a very unpopular Tory government, with a weak and divided Labour Party, 40 per cent of whose Scottish voters were Yes supporters?

NATO was of course the big debate of the conference two years ago when Angus Robertson MP decided to have his Clause 4 moment and persuade conference to back NATO membership. He thought it would pass easily, but he was badly mistaken. As the debate progressed he and the leadership got more and more worried as it appeared they might lose not only the argument but the vote. A three-line whip was imposed and Alex Salmond called in favours of the Asian delegates from Glasgow to avoid defeat. The vote was narrowly won and Angus Robertson foolishly strode into the press room and boasted to the journalists: “Who dares wins”.

Two years on I suspect the new members of the SNP would not be too impressed with Angus’s military posturing and if the vote was taken again today the result would be very different. Since the SNP decided to join NATO it has bombed Libya, Iraq and Syria with little signs of success. More importantly NATO is now being manipulated by the USA in dangerous Cold War moves over Ukraine, with the full support of the Tories and the tacit support of Labour. The truth is NATO has become a serious threat to peace and I suspect the SNP conference would agree with this now and vote to quit.

Finally it has also become clear from the conference so far how much the SNP must change to meet the aspirations of the new members. Clearly the role and conduct of the Standing Orders Committee must be urgently revised. It cannot be democratic to have a small committee changing the text of branch motions agreed by branches representing 1,500 members. Secondly the conference has been far too dominated by parliamentarians, both in resolutions and in speeches. Over half the resolutions on the agenda came from MPs and MSPs, who make up more than half of all speakers in debate, and the Standing Orders Committee never interferes with them. Of course the conference wants to see the party’s “stars”, but five speeches from Calum Mccaig MP in two days for example does seem a little excessive.

On the positive side, despite the manipulation of the agenda, the conference proved lively, with many good speeches from new delegates. Excellent speeches from Alex Salmond MP on Syria making it clear that the SNP won’t be backing British military action, Alex Neil MSP on the Tory welfare cuts, and a great contribution from  Mhairi Black MP that hinted to future greatness, as predicted by her party leader.

Nicola Sturgeon’s opening speech was received with adulation and no doubt her closing speech has sent  delegates home happy and ready for the fray. Latest polls suggest that victory will be the likely outcome, with  the SNP 30 points ahead of Labour in the polls; clearly there is no Corbyn bounce yet in Scotland.

However on their homeward journey the delegates might reflect that at their first conference, they defeated the leadership on land reform and nearly defeated them on fracking. These are healthy signs for any party and they are likely to reflect that a little more democracy and debate will help them to achieve more radical policies in future.

Hugh Kerr is a former Labour MEP and an SNP member.

First Minister calls for North Sea taxation to be devolved