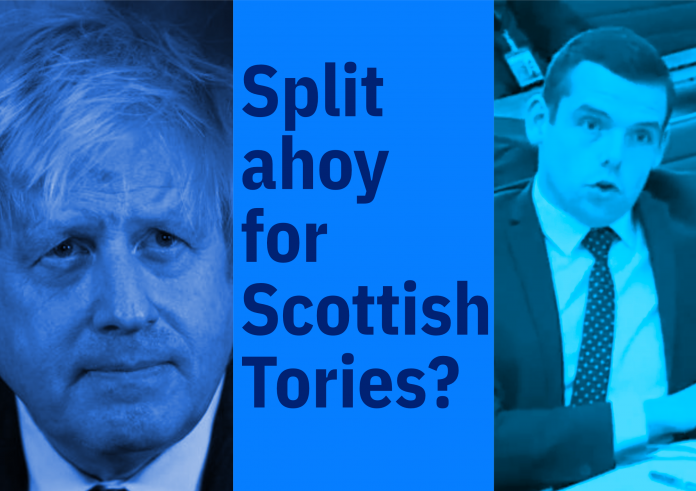 Molly Pollock takes a look at rumblings in Scottish Tory ranks, contemplating it seems it may be time for a break with sleaze, cronyism and constant embarrassing u-turns by Johnson’s government catching them off guard

Operation Arse it was called: the campaign to stop Boris Johnson becoming leader of the Conservative Party and Theresa May’s replacement as Prime Minister. The Scottish Tory leader, Ruth Davidson didn’t think much of Johnson and gave her support in the leadership battle to Sajid Javid. Others also believed Johnson wasn’t the right person for the job, shunning him in favour of support for Jeremy Hunt. Johnson’s stint as London Mayor and Foreign Secretary had not endeared him to them.

But, as happens in politics, roads to advancement and to cabinet positions ultimately bulldozed scruples aside and knees were soon bent to the new leader while warm words about his suitability and vote-pulling power followed when little more than six months later he won an overwhemming victory in the December 2019 general election. Few could carp at the 80 seat majority gained and all wanted a slice of the victory cake.

Murdo Fraser’s call in the 2011 Scottish Tory leadership election for a separate Scottish party was buried when he lost out to Ruth Davidson. Her striking difference from previous Tory leaders, her high profile and popular promotion of the Tory cause was no time for radical change. The 2019 80 seat majority cemented the belief it was worth ditching principles and hostility to Brexit, especially if it meant a foot up the slippery political ladder and an increase in salary. Brexit was in the future. Negotiations would ensure those who mattered were looked after. The PR machine pumped into overdrive would champion the advantages, the UK’s strong position holding all the cards, all appeared front and foremost in print and broadcast media.

And the Scottish Tories sailed along with it, their loss of seats in the 2019 general election when they plummeted from thirteen to six seats, with their vote down 3.5%, caused only an insignificant ripple on the high tide water of that 80 seat majority.

Then the realities of Brexit began to cause unsettling waves. The Scottish economy is being harder hit than much of the rest of the U.K. Farmers and fishermen already anxious as the realities of being out of the EU began to impinge on businesses and livelihoods, have been left reeling by impending trade deals with Australia and New Zealand. These will allow imports of meat of standards lower than those in the UK at present, with acceptance of lower animal welfare standards.

Brexit and Covid-19 have conspired to make life difficult for businesses of all kinds as EU nationals have left in droves, forced out by the policies of the UK government, seasonal workers on which many food producers have for years depended have stayed within the EU, shunning the U.K. And this at a time when infection rates from Covid and Omicron are adversely affecting the number of people at work.

Within the U.K. attitudes towards Brexit have been slowly changing as more downsides of our departure become apparent, with a majority now believing the U.K. should not have left the EU. Scotland, of course, voted overwhelmingly to remain, so feels particularly aggrieved at having to suffer the consequences of a life-changing policy we didn’t vote for, forced through by a government we didn’t vote for, and haven’t for well over fifty years.

With Tory support now sliding dramatically across the U.K. and with Scottish council elections in four months, Tories are now looking at their campaigning options. Hostility towards independence and a dermination to fight it to the bitter end, and even beyond, has not changed. But with the SNP still riding high in the polls after fourteen years in office, unionists are becoming ever more desperate. There have been calls for all unionist parties to work together at the next Scottish Parliament election to oust the SNP from government, though with an independence referendum having taken place and been won this could be pointless. On the other hand if there is another ‘No’ vote then such tactics could make more sense, burying the SNP and independence for generations. Scottish LibDem leader Alex Cole-Hamilton would be up for that.

Ruth Davidon who initially said she could work with Johnson was not uncritical of him, believing his type of premiership would alienate Scots and drive more towards independence. In August 2019 Davidson resigned as Tory leader, ostensibly to spend more time with her family. Most believed this was code for anything to get away from bumbling Boris. Being made a Baroness with a seat in the House of Lords has not stopped her berating Johnson, and recently this appears to have been ramped up with criticism over his policy for compulsory voter ID, condemnation over his dire speech to the Confederation of British Industry conference, and his handling of partygate.

Of all the events or policies that coud have stirred public fury it was the holding of parties in Number 10 and other government buldings whilst lesser mortals were unable to visit ill or dying relatives and were banned from contact with others. To add insult to injury Johnson’s unfeeling and unthinking dismissal of these as work meetings or just a few colleagues having a drink after work infuriated the public and this ire has been seen in numerous opinion polls.

Is a Tory split on the cards?

Back to the immediate future. Anas Sarwar has refused to rule out coalitions at council level with Tories to keep the SNP out of administration in many councils, as they already do. But before coalitions can be forged seats need to be won and many Tories, furious or at least extremely uncomfortable at the sleeze and corruption uncovered in and around Number 10, are now weighing their options, faced with a tsunami of losses reflecting their slide in the polls. Amongst these options is the resurrection of Murdo Fraser’s suggestion of a separate Scottish Tory party.

In The Times Peter Duncan, former MP and Scottish Tory chairman said that, in the wake of Johnson and his government’s recent party problems and the handling of them, there was growing support for the idea. Johnson’s conduct is harming the Tory vote. The chaos in Downing Street is holding back the party’s prospects. STV also covered the story saying fiascos like the Owen Paterson debacle, Downing Street parties, and problems around Covid strategy have put Johnson under pressure like never before, and this is seriously hurting the Conservative cause in Scotland.

The National‘s article referred to Andy Mciver’s piece in The Herald in which he claimed that the wave of Downing Street scandals – the Owen Paterson debacle, the Downing Street flat renovations, the loss of the by-election, the Peppa Pig speech and partygate) were stoking the feeling of a separate party being advantageous. Scottish Tories, he believed, were tired of being tied to the UK party’s fortunes, with their support firmly linked to the popularity, or otherwise, of the party at Westminster. Maciver is a media commentator and director of a PR consultancy who obviously thinks a Scottish party could have a better image and increased votes.

So what would a separate Scottish Tory party mean?

A separate Scottish Tory party would make it easier to distance itself from this sleaze and from policies MPs were required to vote for at Westminster but which are highly unpopular north of the border. This could be done whilst still being attached in some way (affiliated or associated?) to the Westminster party, voting with them on many major issues whilst providing Scottish Tories with much more say and leverage than at present on issues they aren’t so keen on. If losing a vote in the House of Commons was at stake then Scottish Tory voices could have more say in shaping and implementing government policy.

Then there is the thorny issue of independence. Scottish Tories in the main are not about to change their minds on that but their campaigning stance might carry more weight with voters and be accepted as more believable if they were to espouse and demand additional real powers, perhaps even federalism which would give them and the LibDems (perhaps even Labour) a common platform. Membership of the single market, like Norway, might also be an option. Not only could such moves reharness those farmers disillusioned by their treatment at the hands of the Tories, they might also attract votes from those at present undecided on independence. They could even draw to the fold those who are thinking of voting for independence but who remain wary.

This of course means that Scottish Tories would wholeheartedly have to embrace devolution, something they have been unable to do to date.

Former MSP and now the John Millar Professor of Public Law at the University oif Glasgow, Adam Tomkins has apparently said that no opposition parties in Scotland will get near power until they break free and divorce themselves from London. Tomkins is presumably talking of parties and policies but his statement does have a ring of independence about it. In April 2021, Tomkins wrote an article in The Spectator calling for a law to define when UK constituent nations could hold independence referendums.

A shudder or an earthquake

So the ramifications of Scottish Tories setting up a separate party, which would have to be done anyway once Scotland becomes independent, should be pondered by Tories as well as non Tories. If the Scottish Tories grasp the separation nettle will that set the dominoes tumbling as Labour and LibDems follow? Would the avalanche sweep Labour and LibDems along a similar path or would they stubbornly resist and cling on to Westminster’s coat-tails until the winds of change blowing a hoolie force a rethink? How would voter perception in Scotland be affected by all parties being Scottish parties, and with policies probably more in line with Scottish desires?

How would this affect the campaign for indepenence?

The political landscape has been fairly unchanged in Scotland for many years. An upheaval, an earthquake may just be on the horizon.