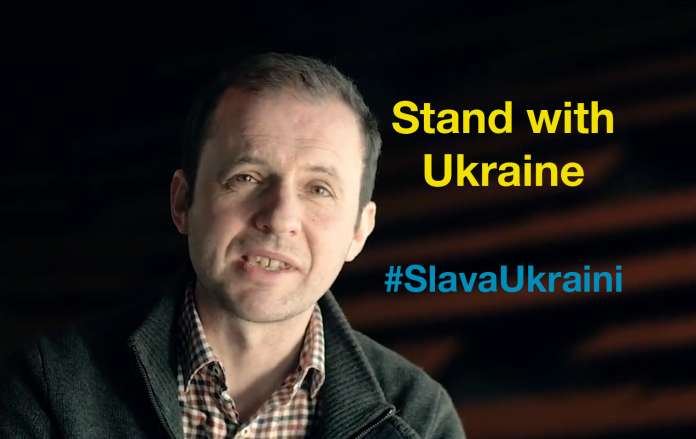 Newsnet believes this is an important video posted posted by a Scottish academic who is a specialist in international relations and has hands on experience of working with regions once part of the old Soviet Empire.

Stephen Gethins is Professor of Practice in International Relations at St Andrews University and Strategic Adviser to the Principal on External Relations.

Stephen Gethins has considerable hands on experience in parts of the old Soviet Empire, which like Ukraine, also have issues with Putin interference.

He worked in the NGO sector specialising in peace-building, arms control and democracy in the Caucasus and the Balkans He worked with NGO Links in Tbilisi Georgia, focusing on the conflicts surrounding the breakaway entities in the South Caucasus such as Russian controlled South Ossetia, Abkhazia which most countries recognise as part of Georgia and Nagormo-Karabakh.

He also worked for Saferworld, an international non-governmental organisation with conflict prevention programmes on arms control, peace-building and democratisation in the former Soviet Union and Balkans.

Stephen is a member of the University’s Senior Management Team and an Adviser to the Principal on External Affairs.

His book on Scotland’s Foreign Policy footprint, Nation to Nation: Scotland’s Place in the World will be available in paperback later this month.

Update on war, some notes

A planned mass evacuation of civilians from eastern Ukraine’s city of Mariupol was aborted yesterday as Russia continued shelling the city and its neighboring areas. The agreement for today Sunday was also aborted as Russian troops regrouped and continued to target civilians. Vladimir Putin cannot be trusted to follow through on agreements.

Russian troops are headed towards the Kaniv Hydroelectric Power Plant, about 100 kilometers south of Kyiv, the General staff of Ukraine’s Armed Forces reported on March 5. Given Russian troops irresponsibility in using live fire at the Zaporizhzhia nuclear plant this is a deep concern. Radiation levels remain normal.

Watching the attack on Zaporizhzhia 2 days ago in the small hours what at first we thought might be a really stupid attack by local commanders is now clearly deliberate Russian aggression directed by Putin to spread alarm in Ukraine and beyond.

100,000 Ukrainians have joined Ukraine’s Territorial Defense Forces. According to Defense Minister Oleksii Reznikov, 66,224 men have already returned to Ukraine from abroad since the war started.

Ukrainian Hero, thirty-four-year-old Ukrainian Captain Valeriy Chybineiev was killed in the battle near Hostomel, a city on the outskirts of Kyiv, on his birthday on March 3.

100 Ukrainian children in care from an orphanage, some of them handicapped, were evacuated by Israel to Ben Gurion Airport yesterday. Russia would not dare attack an Israeli passenger jet. Russia and Israel have different objectives in Syria where Putin supports the Assad regime.