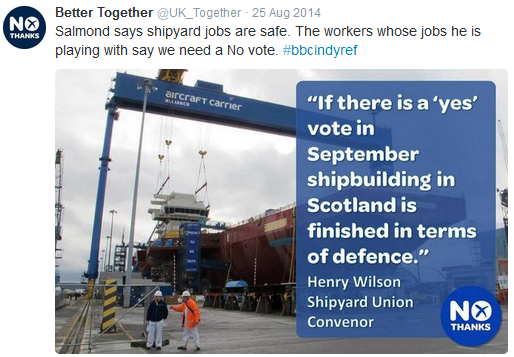 I watched the third instalment of the Altered State documentary this week.  It covers last year’s referendum, its aftermath and whether independence might be in sight. You can view it at the bottom of this report.

Part of the documentary dealt with a second referendum and when it should be called.  The prevailing thought expressed by those who appeared in the documentary is that the SNP should call it when Yes can win.

I have no problem with this strategy – it is after all a bit of a no-brainer.  You call a contest at a time that it is beneficial to you and not your opponent.  What does concern me though is the belief that the second referendum is somewhere beyond the horizon and, by extension, campaigning is also in that far off place.

Nothing could be further from the truth.  For whilst the date of a second referendum has yet to be determined, campaigning for what could be the vote-of-votes is already in full swing.  In fact it never really ceased even after Unionists won last year’s historic ballot.

The alliance that was forged between Labour and the Conservatives during the first referendum campaign has endured beyond it.  Witness Thursday’s exchanges at First Minister’s Questions which saw Scottish Labour leader Kezia Dugdale pick up George Osborne’s North Sea Oil stick and proceed to throw it at the SNP.  It was a perfect Tory-Labour tag team move.

Some observers opined that Dugdale seemed to be fighting last year’s referendum.  But they were wrong.  She was fighting the next one, and elements of the media have joined her.

George Osborne didn’t highlight falling oil revenue just to goad the SNP ranks in the House of Commons, although he and the Tory backbenchers did guffaw loudly.  The Chancellor’s reference to the north-sea resource was intended for Scottish consumption – specifically Scottish media consumption – and boy did they regurgitate it.

It found its way into newspapers, bulletins, analyses and interviews to such an extent that it rivalled the very real news story which of course was George Osborne’s Tax Credit U-Turn.

The media coverage, extensive on BBC Scotland as the video clip above shows, gave the impression that only the SNP over-estimated oil revenue during the referendum campaign.  What was never highlighted is that the UK Government made equally ambitious pledges.

During the referendum, David Cameron promised a £200bn oil bonus for Scots in return for a No vote.  What we got instead was gloating over the falling oil price and the loss of over 60,000 oil and gas jobs. 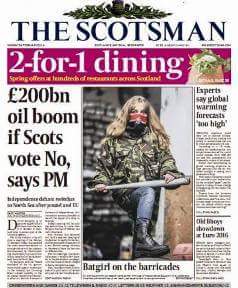 On the same day that George Osborne was goading the SNP over the dramatic fall in oil prices, the UK Government quietly announced it had scrapped a one billion pound grant earmarked for Carbon Capture.

The announcement was a major blow to Peterhead power station.  Peterhead was thought by most experts to be the perfect location for Carbon Capture.  It had been promised similar funding by the last UK Labour Government, but the plug was pulled by Alistair Darling.

The Tory/Lib Dem alliance had resurrected the grant and dangled it as a bribe months before the 2014 referendum.  It was of course accompanied by the obligatory warning that the funding would be placed in jeopardy with a Yes vote.

Speaking in a BBC interview in February 2014, UK Energy Minister Ed Davey said: “I think it would be more difficult to proceed in an independent Scotland,” 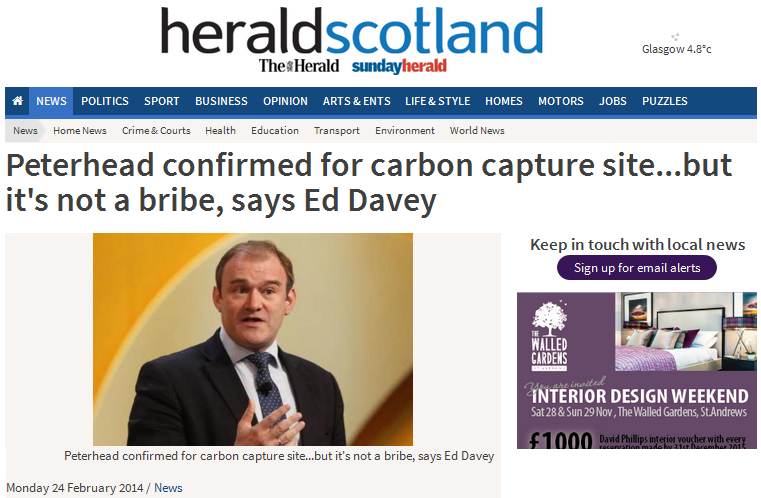 The Tory Government’s decision to scrap the grant was not just a broken pledge made to Scots during the referendum campaign, but was also a Tory manifesto commitment.  But these referendum broken promises aren’t being highlighted by our media.

In fact there’s barely a week goes by when something we were told would only happen in the event of a Yes vote, happens anyway.  The ‘broad shoulders’ of the United Kingdom don’t appear to have been that broad after all.

The refusal of our media to confront Unionist politicians over broken pledges and promises made by the No camp during the referendum campaign is something that hasn’t gone unnoticed by many Yes supporters.  The recent announcement that HMRC offices are set to be closed with the loss of thousands of jobs followed on from the news that Scotland’s remaining steelworks are also set to close.

Steelworkers and HMRC employees were specifically targeted by Labour politicians during the referendum campaign.  The message was that a No vote would protect their livelihoods.  Yet despite the high-profile promise having been broken, resulting in many people being thrown on the scrapheap, there has been little or no pursuit of Unionist politicians complicit in the betrayal.

Another broken referendum pledge came with the announcement that the order for thirteen Type 26 Frigates, promised to Clyde Shipyards, had been cut to eight.  Shipbuilding was one of the biggest economic trump cards for the Better Together campaign.  It was relentlessly pushed by the media and became a motif which represented the pro-Union economic argument and its defence argument together.

Yet even when it was confirmed that the orders to Scottish yards would not be honoured as promised, there was little media outcry.  BBC Scotland even attempted to play down the impact.  The clip below shows how Jackie Bird described the order cut-back.

It wasn’t just the attempt by the BBC to portray the cut as only an “apparent” cut.  In a quite bizarre move BBC Scotland also strived to present the announcement as good news.  Take a look at the headlines below and note how bad news changes to good news in the space of a couple of hours.

The second headline is based on comments from a GMB union official who represents workers at the Clyde shipyards.  On the day the Tory Government announced the order was to be cut, Jim Moohan told the BBC:

“Once again this is great news for Clydeside, which has been rewarded for its continuing quality of work produced by the skills and experience heavily invested in by BAE Systems.

“Instead of the peaks and troughs which caused redundancies in the past, we now have continuity.

“This should be welcomed and not used for political mischief by those who have no knowledge in this area of industry and whose vision going forward was a dated Type 42 Destroyer to be the sole protection for Scottish waters in the event that the referendum question had answered Yes.”

You’ll note the attack on the Yes campaign contained in Moohan’s statement.  This isn’t surprising given Moohan publicly supported the Better Together campaign and contributed to it.

It underlines my point that Unionists are continuing to campaign against independence.  Moohan had two choices when giving his statement to the BBC – either attack the Tories or attack the SNP.  He chose the latter.

But what wasn’t reported by the BBC was that Moohan had already given his views on the cut-back.  Seven days earlier the same union official had issued a statement attacking the reduction in the number of Frigates to be built.

“I raised this with Philip Dunne recently when the first steel was cut for the ships.  We have certainly heard rumours that the number of ships could be reduced, which would be very serious.”

He added: “Obviously the Ministry of Defence contracts are vital for the continuation of shipbuilding work on the Clyde and at Rosyth, and if the number of ships is reduced then that means less work and potentially will lead to people being laid off.”

In the space of a week the cut-back had gone from something that was “very serious” and could lead to “people being laid off”, to being “great news”.  By issuing his second statement, Moohan allowed the BBC to reverse the story – bad news became good news.

Ask yourself, when was the last time a trade union issued an official statement welcoming a cut in orders from a Tory Government that could lead to its own members losing their jobs?  Like I say, the Better Together alliance still endures.

Everything is being seen through the eyes of the constitutional debate, and there is no serious constitutional debate unless a second referendum is on the cards.  Unionists know it’s coming.  That’s why all of the practices that led to an erosion of trust between the corporate media and huge swathes of the Scottish electorate are still there.

Stories harmful to the SNP are being covered relentlessly whilst those damaging to Labour are being downplayed or even ignored.  Just look at the way the Natalie McGarry story has been covered, with innuendo marrying fact to produce sensationalism.

Contrast the fevered coverage of McGarry with the near silence that has followed news that £10,000 has gone missing from the Labour group in the constituency of Scottish Labour leader Kezia Dugdale.  And where’s the furore over the Labour MP appearing in court in Glasgow charged with assault?

One of the most pathetic anti-SNP stories I have ever witnessed was last week’s smear attempt on Alex Salmond after the former First Minister travelled to Edinburgh in order to promote a painting of himself by a Scottish artist.  Unionists issued statements condemning the former SNP leader because he had missed a House of Commons statement from David Cameron on the Syrian situation.

It actually made it onto that evening’s Reporting Scotland.

Salmond was actually in Scotland to host a long standing engagement relating to war veterans. He appeared at a promotional event for the painting that same day because it was to be auctioned off in order to raise funds for young cancer sufferers. The painting was eventually sold for £51,500.

It is worth pointing out that, as a member of the Privy Council, Salmond knew already the content of the Cameron statement.

Newspapers and broadcasters are back to the old habit of scratching each other’s back. This week BBC Scotland has been swamped with pro-Union journalists and non-elected peers providing their analysis of political events. David Clegg of the pro-Labour Daily Record and SNP critic David Maddox – who has just jumped ship from The Scotsman to the “Scottish” Daily Express – were just two who were only too keen to air their views on Natalie McGarry.

Clegg has been invited onto BBC Scotland political programmes three times in eight days. Michael Forsyth, John Reid, Jeremy Purvis, Jim Wallace and Menzies Campbell have all been allowed to air their views on BBC Scotland. None are elected representatives. All are Unionists.

The campaign against independence is up and running. Everything is seen through the prism of the second referendum. Unionists know it is coming and the media is a reflection of Unionism.

It’s partly why the media is reluctant to ask Kezia Dugdale whether she supports Jeremy Corbyn in the current Labour civil war over Syria. Labour in Scotland are virtually dead, but to have Dugdale express the wrong view on such a sensitive issue could finish her leadership and her ‘party’ off completely.

That is why groups like RISE are naïve in the extreme when they seek to chip away at SNP support. Seek to change society by all means, but first let’s win the powers with which to do so.  We won’t get them without a strong SNP.

Act as though the second independence referendum has been called. Get campaigning. Highlight the broken pledges. Highlight the Tory cuts. If the Yes movement works as it did during the first campaign, we can combat the media. By the time the date for Indyref2 has been set, we’ll be ready.