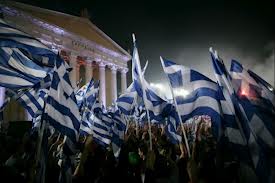 They are the Far Left, according to the British media, for whom anyone with a belief in a fair society is some kind of extremist.

Their victory brings them “into conflict with Brussels”, as if that wasn’t the whole current thrust of conventional British politics. They are daring to challenge the imposed order of power units, each driving the other across the spectrum of western government – ministers to bankers to industrialists to lobbyists.

Syriza is the SNP and SSP rolled into one, to the Brit mainstream. It is genuinely seeking redistribution, it is ready to tear up self-serving agreements and rocking the foundations on which the complacent elite reclines.

The tone of media coverage suggests this democratically-elected party and its coalition partners is fighting outwith the rules. They are insurgents. They don’t understand that Germany is in charge and that rich northern nations have the whip hand over slothful and spendthrift southerners. They are – in echoes of the indyref – “threatening to renege on their debts”.

The tone of indignation on Radio 4 reflects the middle class outrage the news presenters brought forth when Salmond warned there would be no debt deal if there was no currency arrangement. Upstarts and ingrates!
But the rise of Syriza isn’t about the economy. It’s about dignity. It is a response to organised humiliation, a deliberate attempt to penalise a whole nation and to teach a lesson about raw power.

Greece is small. Germany is big. What happened in 2003 Germany when flouted the conditions of the Stability and Growth Pact, running a budget deficit in excess of 3pc of their GDP? Nothing. Berlin avoided sanction because it was too powerful in Brussels.

Today the country’s balance of payments position with the rest of the world is heading for a record 7 per cent, far above the EU’s mandated 6pc maximum. In theory Berlin risks being hit with sanctions under new rules which punish excessive imbalances for creditor as well as debtor countries. Will it happen? What do you think?

Yet when Greece got into trouble, it was dragged into the equivalent of the High Court for debtors, forced into deals that were unsustainable and left with a scorched-earth economy where people lived without electricity, without food or wages and, crucially, without dignity.

Yet whose job was it to monitor the borrowing and spending of Athens, if not the European Central Bank and to warn of excess and deficit? The structural deficit in Greece and poor debt-to-GDP ratio long pre-dates the financial crash and was so notorious that the country did not meet the joining criteria for the single currency.

As Angela Merkel said – they should not have been allowed in until they met the requirements. Borrowing was out of control and the wealthy avoided paying their taxes. A tight fiscal regime ahead of membership should have been the minimum requirement instead of the headlong rush to complete the Euro project.

And just as English commentators reserve the right to lord it over Scots by pretending to be our benefactors, so the Germans have pumped-up ideas too. As a proportion of GDP, Greece spends twice as much as any other EU member on defence and the largest beneficiary of this arms trade is – Germany. Yet even after the economic crisis had begun, Germany – and France – were trying to seal lucrative weapons deals even as they were pushing for deep cuts in areas like health. That is not a point made often by Merkel.

And who really benefits from the current configuration? Germany has enjoyed a large and lucrative captive market among its eurozone neighbours, and if Greece left the single currency, they would suddenly become rivals with a currency too weak to afford BMWs and Mercedes cars  – and potentially weak enough to compete with Germany in key export markets.

The euro would appreciate on the foreign exchange markets, making German goods more expensive for consumers outside Europe, in the US and the Far East.

As the Observer said: In other words, Germany has been quietly reaping economic dividends from its membership of the single currency over the past decade, and it will now have to decide whether it’s willing to pay a solidarity tax on a euro-wide scale.

All this is has left resentment and humiliation as the core feelings of the Greeks, no doubt a supercharged version of our own hurt when we’re sneered at for being unable to “support ourselves”.

Syriza shows there is a limit to what people will take, that you can only twist the knife so often before you provoke a reaction. Could it be that it is the relentless negativity and the demeaning of Scotland by Better Together that roused a nation to turn against Unionist parties post-referendum? The antics of the new Labour leader in Scotland would appear to confirm that is so, because his every utterance is designed to reel in opinion that he is not pro-Scottish.

Syriza is a Greek expression of nationalism – a popular uprising of collective belief in justice and a rejection of a destructive external force. Like the Yes movement, it is viewed with deep suspicion as a threat to the state and the established order. Good. Let’s salute them.