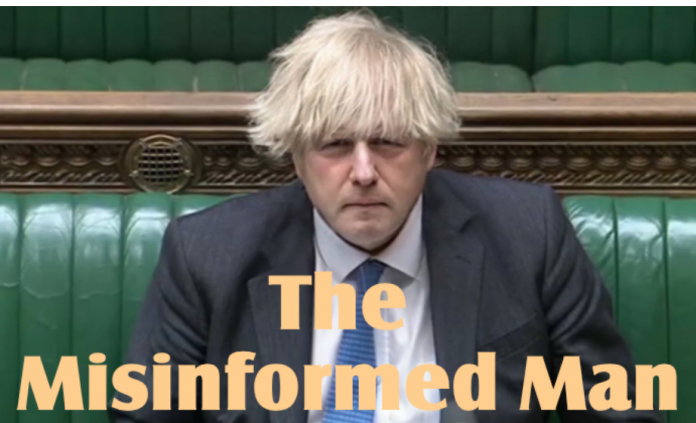 This was said by Jacob Rees-Mogg, Minister for Brexit Opportunities and Government Efficiency, on LBC this morning. This is the clip of the programme.

So, there we have it. The Prime Minister repeatedly assured parliament and the public that no rules had been broken, all guidance had been followed, no parties had been held. Maybe before giving so many assurances he should have double checked what he had been told, or opened his eyes to what was taking place around his office and his home. No parties…and then he admitted to attending some gatherings, inlcuding one in his own home and a birthday get-together with a cake and wine.

Ah, but he was assured that all rules had been followed. The rules were clear – no gatherings. But then the words used – he was assured – were used specifically to mislead, to leave an escape door open for him. Jacob Rees-Mogg has stepped up to open that escape door, getting wheeled out to tell us the poor Prime Minister had been misinformed, lied to by his staff no less. If Johnson’s staff felt the need to lie to him about parties being held within the Number 10 complex then surely that indicates his staff knew they were against the law.

We are aware Johnson is a Prime Minister who often appears not to be on top of his brief, making glaring mistakes in speeches, waffling when he doesn’t know answers to questions, wildly waving his hands and arms as he tries to shift the conversation onto another topic. The reason for this may be due to his apparent reliance on brief WhatsApp updates to keep him informed rather than bothering to read the briefing papers in his red box. Surely this lack of interest didn’t mean the Prime Minister was ignorant of the laws passed to tackle the covid-19 crisis.

As the fixed penalty notices from the Met start to drop through letterboxes, Rees-Mogg isn’t the only government minister being wheeled out in an effort to protect Johnson’s reputation and his position as PM.

A Prime Minister who can so easily be misinformed, who believes everything he’s told without checking, who is so unaware of decisions made in his own offices and events taking place around him, surely should not be in such a position of authority. If we are to believe Rees-Mogg, the Prime Minister of the UK is little more than a message boy for the spin of others. A government errand boy.

Hardly a resounding vote of confidence in the leader of the UK.

Johnson repeated his assurances to parliament numerous times. He knowingly lied to parliament. There is no other believabke explanation.

And for those who agree with Ree-Mogg and regard Partygate as a piece of fluff, maybe this tweet from Alastair Campbell will make you rethink.

No, this is not trivial. The rule of law and the necessity for it to apply to everyone are the lynchpins of our democracy. Ditch those, and we are on an extremely dire road to the far right. Remember that when pondering Rees-Mogg’s dross. He has his own agenda.