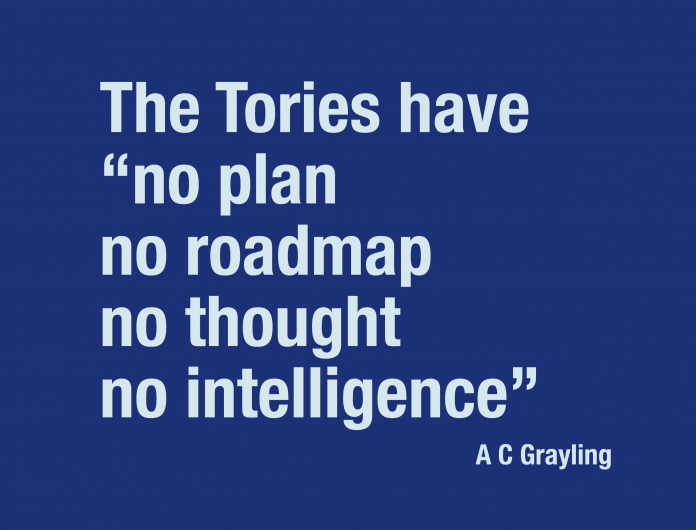 Molly Pollock takes a look at Independence Live’s interview with A C Grayling and picks out some highlights that particulary struck her on the noted philosophers journey to define the future of Britain differently from his view in 2014.

Many thanks to John Drummond of Independence Live for this fascinating talk with A C Grayling.

Professor Anthony Grayling is a British philosopher and author of about thirty books. His new book For the good of the world comes out in February. He was born in Northern Rhodesia and spent most of his childhood there and in Nyasaland where as a young boy he became captivated by philosophy. In 2011 he founded and became the first Master of New College of the Humanities, an independent undergraduate college in London.

In August 2014, Grayling was one of 200 public figures who, in the run up to the referendum in September, were signatories to a letter to The Guardian opposing Scottish independence.

However he has now changed his mind and gives his reasons for this in the interview as well as his thoughts on a range of present issues.

Grayling finds it difficult to listen to anyone in government at present so could only listen to about ten seconds of the conference where Tories were trying to spin the disaster the country is in as a plan. Grayling can’t believe how rapidly the country has collapsed and is now on the rocks.

In 2010 Grayling suggested to Gordon Brown that the UK should take German basic law, into which many British baristers had contributed input, as a basis for a new codified British constitution. He believes the first past the post electoral system is very distorting and undemocratic. The present Tory government was elected on 43% of votes cast, representiing about 29% of the electorate (and an even smaller percentage of the population), but it has 100% of the power and can do what it likes, unchecked by anything. We are now witnessing how rotten our system is.

The Supreme Court decision on the two Scottish Parliament bills seeking to enshrine Human Rights law affecting children into Scots law is, in Grayling’s opinion, a very good example of why Scotland should be independent.

Grayling used to be very pro union for two reasons: an emotional reason as he has roots in different parts of the UK: and because as we were all in the EU he believed it made no difference. Now with Brexit the situation has changed.

Scotland would be a very, very flourishing member of the EU. As a nation with long and deep relations with the continent it is so natural for Scotland, which voted to remain in the EU referendum in 2016, to be part of it.

So Grayling would now be extremely keen to see Scotland become independent and become a member state of the EU.

And he’s migrating north when that happens!

Grayling, in response to John Drummond’s assertion that many independence suporters were becoming frustrated at a perceived lack of action on the referendum front, responded that there was a debate on constitutional propriety, but said that holding a referendum cannot in all moral conscience be something Scots are not entitled to do. Independence was a matter for Scotland and the Scottish people. There has been a long-standing appetite for independence. For instance in 1979 the argument for a Scottish Parliament was won but didn’t meet the threshhold [Labour MP George Cunningham inserted into the bill a clause that the yes majority in the 1979 referendum would have to constitute at least 40 per cent of the Scottish electorate. The Yes side won but its 32.9 per cent of the electorate failed the hurdle and the Labour government decided not to proceed with devolution.]

Now in the wake of Brexit people want to think again and perhaps change their decision from that made in 2014.

Grayling insists he is very strongly in favour of the EU, although admitting it is flawed. It should be regarded as a work in progress which we should be part of.

Brexit was a massive conspiracy by the right wing and the anti EU tabloid press which had, quite deliberately, spouted a tsunami of toxic anti EU rhetoric for decades. The left was anti EU as it regarded it as a capitalist conspiracy whereas the right wing was determined to avoid forthcoming EU regulations on tax havens.

37% of a restricted general election franchise voted to leave the EU – 26% of the population. 51.9% of votes cast voted to leave behind EU freedom of movement and citizenship. It was theft. Brexit was petty and backward-looking.

During the EU referendum campaign there was BBC bias, amplifying the anti EU voice and the UKIP voice. It distorted balance of opinion. The BBC news is now a deep disappointment with a bread and circuses agenda.

The Tories, said Grayling, have no plan, no roadnap, no thought , no intelligence. It is one of the least intelligent governments of his lifetime, or than any he has ever known outside North Korea.

Perceived injustice in society is dangerous, said Grayling. That’s when revolutuons happen. People get very, very angry when they start to suffer and can’t feed their kids. Doing away with this uplift is poking the tiger.

Grayling considers civil disobedience a definite possibility in the present situation. The prospect of rationality breaking out and of real hope dawning seem limited

Labour has no hope of winning an overall majority in the House of Commons. If sensible it would team up with the other opposition parties to oust the Tories. They could decide on key constitutional matters, for Grayling this is mainly electoral reform, to change the game. But a deficit of IQ seems to have got into the water supply – not in Scotland but down south. So there is no hope.

The veneer of civilisation is paper thin. Press matters too far and anything could happen.

The centre left is very divided. Starmer is decent and well-intentioned but he decided to present himself as sensible and politically mature and not attack the Tory government just because it was the government, but agreeing with whatever was right and criticising what was wrong. That approach doesn’t percolate out to the general public and doesn’t wash. Instead there is seen to be no hope-giving message, no lead.

Scottish independence, said Grayling, would have a very good effect on the rest of the UK which at present is a basket case, an oligarchy, an elected dictatorship.

Downing Street backs down as Cameron agrees to meet Salmond