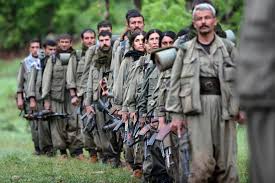 Should the SNP and Scottish Nationalists in general be publicly supporting the Kurds?

They aren’t just trying to establish a homeland, they are being targeted by the forces of Turkey – a NATO ally – in a war-within-a-war that includes civilian murders AND they’re on the front line against Daesh, helping in the UK’s number one foreign policy priority.

There is much about Kurdistan that pro-independence Scots can relate to – a powerful sense of identity, the ambition for statehood, attempts against the odds to create a functioning economy and a pride in punching above their weight. Our countries are mountainous, lightly populated with two main cities and a bloody history. Unlike Scotland though, the Kurds really do need help desperately.

There was an army siege on Kurdish towns in southeastern Turkey that claimed the lives of more than 20 while tens of thousands suffer shortages of food, water and electricity. The Turkish army said that 195 rebels were killed in the recent operations in Şırnak. Local people said the Turkish operation is aimed at punishing the entire Kurdish population in the region for cooperation with the PKK, the outlawed Kurdistan Workers Party.

This is no one-sided struggle. Although the Turks are more powerful, the PKK has ambushed and killed Turkish forces in acts of violence that provide a reason for political opinion here at home to stay silent or neutral. We have been here before in Ireland, South Africa and Palestine as well as numerous former colonies in Africa where violent insurgency morphed into constitutional politics once the case for democratic change was made.

Selma Irmak, a Kurdish MP in Turkey, claims President Erdogan, rapidly gaining a despotic reputation, seeks dictatorship. ‘Erdogan announced earlier that the peace process between Turkish authorities and PKK has been terminated. In fact we do not find any difference between the crimes committed against the Kurdish people by the Turkish army, the terrorist group of Islamic State and the Baathist regimes of Assad in Syria and Saddam Hussein in Iraq. They have been trying to obliterate the Kurdish identity for decades.’

The Kurdish military, the Peshmerga, are the most effective force in the Daesh conflict but, despite the donation of mainly light arms, they are hopelessly hampered in the struggle against the superior arms of Daesh who captured massive loads of armaments from fleeing Iraqi forces. There are over 60,000 Kurdish fighters in the conflict including the 10,000 women of the YPJ.

They are the West’s allies and toughest anti-Daesh fighters. They are praised by NATO and Washington yet they are attacked by our NATO friend Turkey who has their political party branded as terrorists because they are terrified of a Kurdish state on their frontier and partly formed from Turkish territory.

This summer the Turks made air strikes on Daesh yet only a few hours later started dropping bombs in Northern Iraq —on the PKK. There are regular reports, and pictures, of murdered civilians, the suggestion being Western nations turn a blind eye to appease Ankara, a tactic that works so long as world opinion remains deaf and blind.

Kurdistan is wedged between Syria, Iran and Turkey. Recognised as a federal entity by Baghdad, whose Iraqi forces have no mandate to enter, Kurdistan holds the world’s ninth-largest oil reserves and control over its territory and its own armed forces, although it is not a full sovereign state.

Iraq is a domineering ally. Those oil reserves which once bankrolled an expanding economy open to western investment, are tumbling in value and restricting the Kurds’ ability to raise the money needed to run their autonomous region effectively.

Tricky, of course, and fraught to attempt direct comparisons, but Scottish Nationalists may at least experience a fellow feeling for a united people whose political future is historically at the mercy of bigger neighbours. The reference to oil will resonate too.

Yet this looks like an area where the Nationalists fear to tread. They do need to pick their fights carefully and no doubt publicly endorsing a people with a complicated relationship with the West would be seen as unnecessary meddling at the Foreign Office. But, given what the Kurds themselves are going through, would it really be too dangerous – too ‘brave’ – to indicate Scottish moral support. If we take at face value the British Prime Minister’s remarks, then the Kurds are laying down their lives to keep us safe. Maybe we could manage a Thank You… The Kurds after all sent an official letter of congratulation to Nicola Sturgeon after the SNP’s win last May

To be fair, there was an early day motion in the Commons last summer backing the arming of the Kurds. It received just 16 signatures, five of them SNP. And the MEP Alyn Smith has a record of support. The persecution of a Kurdish politician drew this response: ‘I find it the height of ignorance that the Foreign Office has shown a reluctance to indicate their strong opposition to the use of Turkish anti-terror laws to target respected Kurdish politicians such as Leyla Zana.’ But that was seven years ago. There are various community initiatives where SNP people meet with Kurds living here and occasional opinionated forays by MPs like Roger Mullin but, despite an undoubted low level backing, you’d be hard pressed to expect the Scottish public to either know what was going on or if their government had a view.

Wouldn’t a backbench debate in Holyrood provide an opportunity to hear SNP ministers rally to the Kurds’ cause as fellow travellers seeking independence? MSPs have the right to discuss any subject they wish and there is no ideological reason why there shouldn’t be cross party support. It might cause mild embarrassment to London but isn’t that partly what devolution was about – giving voice to our distinct view? The SNP has a patchy record in international engagement, usually because we are pursuing economic advantage as with China or Iran, but there is surely space for a social democratic party to express moral support to those engaged on a course of action with which we identify.

Money down the drain – Time to pull plug on Labour’s...

Mayor of New York thanks Scottish Parliament for 9/11 support