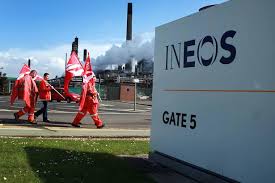 Scottish TUC leader Grahame Smith addressed the SNP conference on the inquiries of the current Tory bill to restrict trade union activity in the UK, imposing greater restrictions on British workers. The STUC wants trade union legislation to be devolved to the Scottish response.

This is an edited extract of his Aberdeen speech.

the Trade Union Bill is a solution to problems that simply don’t exist. We do not have a strike problem in this country. And even if we did, that would be no reason to trample over workers’ civil and human rights.

The so-called ‘evidence’ on picketing, none or which comes from employers or workers claiming intimidation, includes such extreme tactics as: The use of air horns in public places; Walking slowly in front of vehicles; Using the internet to post intimidatory material (undefined) and blocking the access for shoppers at the doors to retail stores.

It mentions that during the Ineos dispute secondary targeting occurred at a number of premises and suppliers who had links to Grangemouth.

Unite the union put a large inflatable rat outside the offices of Jim Ratcliff the owner of Ineos! It depends very much what you define as intimidation! I think it is intimidation if an employer, as in the case of Ineos, threatens to close a plant and take away workers’ livelihoods. I think it is intimidation for an employer to threaten to decimate a local community or indeed a national economy, if a union and its members do not agree to accept cuts in their pay, terms and conditions and pensions.

An inflatable rat seems pretty mild to me.

My second point is that the bill raises serious questions about the nature of democracy in the UK and should be of concern not just to unions and their members but to anyone concerned about democracy, human rights and civil liberties.

The Tories claim that their proposals on ballot thresholds are about outlawing undemocratic strike action. This has nothing to do with democracy.  I will not take lectures about democracy from a government elected on only 24% of those eligible to vote – and only 10% of those eligible to vote in Scotland –  much less, of course, than the proposed thresholds that they wish to impose on strike ballots.

If the Tories were serious about increasing participation in ballots, which i am all in favour of, they would allow union to use secure online balloting, including on-line balloting at the workplace. We can bank online. We are encouraged by the UK government do a range of government business online, like pay your car tax or apply for a driving licence.

You can vote for the leader of a political party on line, or in the case of the Tories, vote online for your candidate in the London Mayoral election. But it is unlawful for union members to vote on line in a strike ballot.

The intention to make it illegal for public sector employers to collect membership fees on behalf of the union, the so called check off arrangement, and to restrict union facility time represents an unhealthy and damaging degree of centralised dictate. And it drives a coach and horses through both the spirit and intent of devolution, to Scotland and wales and within the regions of England.

It is totally unacceptable that, a minister, from an office in Westminster, without any parliamentary scrutiny, can determine how much the Scottish government or a local authority or the NHS in Scotland, can invest in ensuring good and effective industrial relations with its recognised unions and to face sanctions if they decided to invest more than the minister decrees.

In pursing this vindictive, unnecessary bill the Tory Government has wilfully placed our country at odds with international law and the conventions on freedom of speech, freedom of association and assembly and the rights to strike. These conventions exist to protect fundamental human rights and civil liberties and in recognition that our democratic wellbeing demands that workers have a meaningful collective voice in the workplace, at the core of which is the right of workers to withdraw their labour in protest at the actions of their employer without the fear of being sacked.

Without the ability to strike as a last resort, workers, will have no effective voice in the workplace and will simply be left with no alternative but to accept the decisions of the employer, whatever the consequences. There will be no fairness or justice or democracy in the workplace.

POWERS SHOULD BE DEVOLVED

The UK is conspicuous in not recognising the importance of constructive industrial relations and the many benefits that come from the effective voice that unions provide, something that is well recognised in successful northern European economies – in Germany and in Scandinavia.  And it is also not the approach to unions and industrial relations we are trying to create here in Scotland.

This makes the case for powers over employment protection to be devolved at the earliest possible opportunity even more compelling. The provisions of this bill intrude on devolved responsibilities to such an extent that not one clause should be applied to Scotland without the consent of the Scottish parliament, a consent that I am confident would not be forthcoming.

We will of course continue to work with you to defeat this bill in the Westminster parliament and i commend your approach in building alliances to do that on behalf of working people across Britain. We will oppose the bill through legal challenge– although the courts have never offered us much comfort.

It is inevitable that if this is bill implemented it will bring unions into conflict with the law and bring lawyers and judges into industrial relations as never before. But others have tried to use the law to destroy the trade union movement and we are still here. We do not intend to be bullied or intimidated.

This bill is an attack on unions. It is an attack on our right to strike and to represent our members. But more than that, it is attack on democracy, on fundamental human rights and civil liberties, on the right to peaceful protest.

Grahame Smith is general secretary of the Scottish TUC