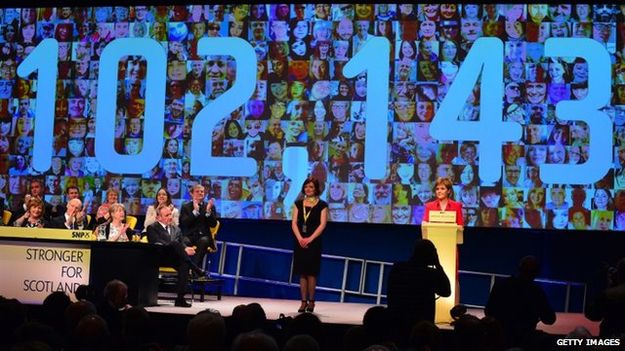 My previous article was how the SNP becoming the third largest party would make it more British then ever before, and require developed positions on devolution across these isles.

The party that couldn’t persuade Scotland to be independent may yet prove instrumental in convincing the UK it needs to become federal.

The SNP describe this as holding the power. This is an idea we should test. When the SNP was in minority government between 2007-2011, was it in power or did the Tories and the Greens hold the power? The latter two parties were needed to pass budgets, but can they really be said to hold the power? Certainly, this was never suggested at the time and it wasn’t the perception within government.

The smaller parties held influence, and required a system of compromise, but I don’t recall Alex Salmond ever indicating that Annabel Goldie or Patrick Harvie held power over him.

As it is, the SNP’s power over Trident is weak. Certainly they can vote against a new nuclear defence system – and I trust they do, no matter what some right-wingers may have briefed a few weeks back – but even with Labour backbenchers doubts over the missiles, it’s hard to imagine a Commons where a majority won’t support more nukes.

The SNP power in this matter will be to press the argument that the cash-strapped economy of a second-rank military force would be better running up debt on anti-austerity measures than new weapons.

Where strikingly the SNP will lose power is over Barnett and the terms of further devolution. If we imagine a Labour administration supported by the SNP, the package on further devolution and Barnett will still have to be acceptable to a UK-wide audience. It seems quite possible that more powers will be granted to Scotland, but that the quid pro quo will be renegotiation of Barnett.

Put simply, you will have the SNP MPs asking for the most generous Barnett, while Labour argues for more spending in the North, UKIP asks for more in the south, the Tax Payers’ Alliance demanding a general cut and the Tories reckoning £4bn off Barnett would go a way towards the additional £30bn in cuts that they seek. It seems remote that the SNP could win both a pledge on more powers and resist a change to Barnett.

Of course, the SNP could choose to withdraw support from Labour, but the effect of that would be to create a stalemate in the Commons without necessarily winning anything positive for Scotland. You can see why some think the ideal outcome is for the Tories to hold onto their English seats and form the next government.

That would allow the SNP to play the role of fearless outsiders while also reckoning on Labour’s support on Barnett, as an anti-Tory alliance. Even then, the Tories may decide to hell with it and give Scotland full fiscal autonomy, but on UK terms; slashing the number of Scottish MPs, slashing Barnett and imposing tight borrowing limits.

I am sure John Swinney has his officials modelling all of these possible outcomes and strategies are being laid, but this election may yet add a new layer of meaning to the cliche that power devolved is power retained.

Alex Bell is a former Special Adviser to the Scottish Government

Curran ‘I wasn’t around’ claim challenged as Oil-gate refuses to die...