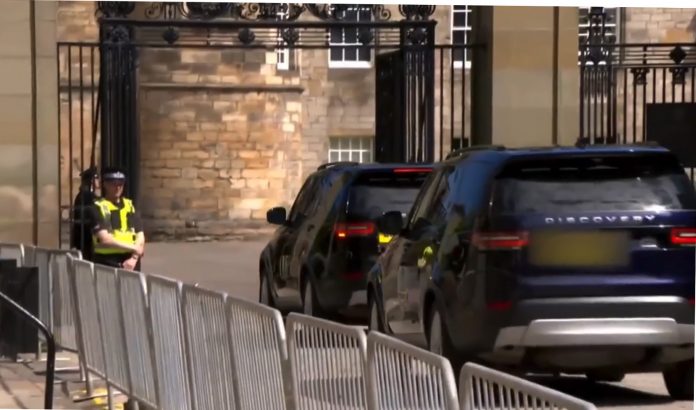 Is there something strange about that? When the man who is second in line to the throne and on a week long charm offensive in Scotland, openly acknowledged as part of the Monarchy’s move to deter support for independence, meets Gordon Brown for a private meeting at Holyrood Palace then something is certainly afoot. With Gordon ‘British’ Brown having launched his campaign to protect the Union, this does suggest the beginnng of a co-ordinated plan that is much deeper than a bit of Scotland soft soaping.

That Channel 4 who filmed through the gates was forcefully told to stop by palace ‘officials’ is extraordinary given that it was a perfectly legitimate piece of news gathering by a respected UK broadcaster. Channel 4 filmed from a public area most of us are familar with as it is opposite the Scottish Parliament. Clearly C4 News hit the Palace’s sensitivity button. This was not on the published list of William’s engagements. A private meeting!

Not for the public to know about, but now we do. Channel 4 have given a full report on being stopped and have not broadcast their footage. Just how heavy handed were the Palace ‘officials’? Mentions of national security? In a real sense it does not matter that the footage has not been broadcast. Everybody knows some footage exists so the issue will rumble on. Really incompetent of the Palace to be so ‘officious’. When caught out best to just acknowledge the ‘private meeting’ and shorten story’s life cycle. We are not going to do that of course, so this will be much referred to when the Monarchy and independence are again in the news.

Rather looks like Gordon Brown is angling for leadership of the next NO campaign. Given his past, looks like same old Devo More, maybe another ‘VOW’ in a new shiny package. Whether he leads the next NO campaign or not Brown is certain to be fist chunking and marching back and forwards across a stage with demented charge and demeanor. Then there is the question of just how popular Brown is in Scotland. The most recent poll I managed to dig up was -28 on a UK wide poll. Is Brown that popular in Scotland today?

Maybe he might just be ‘our’ man to lead NO and help us defeat the Union?