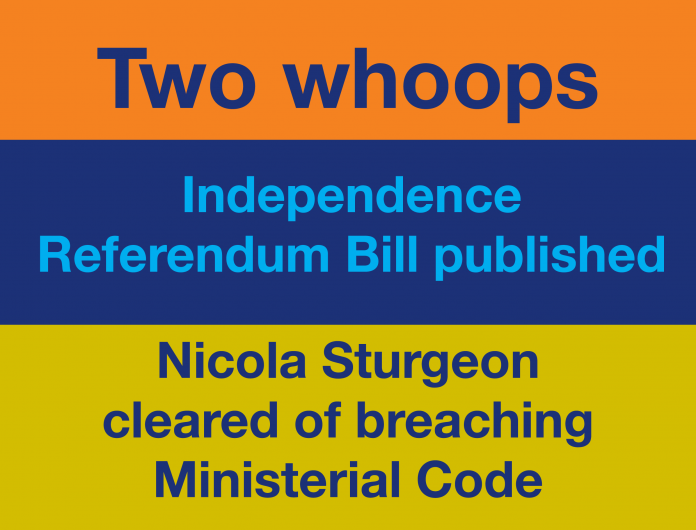 The draft referendum bill promised by the Scottish Government has been published. Using the same question as in 2014, a referendum will be held when Covid19 allows, considered to be before the middle of the next parliamentary term. This may disappoint many who wanted to see a date given but this was never going to happen.

Numbers supporting independence remain borderline so we will rely on campaigning to raise this to a level at which we will win an independence referendum. The campaigning necessary to persuade switherers and soft Nos can’t yet be undertaken allthough restrictions have been recently relaxed. But to get back to the one to one type of campaigning that changes minds we need a return to something more akin to normality.

This is the message in the Ministerial Foreword by Michael Russell.

Ministerial Foreword
The Scottish Government has been laser-focused over the past year on tackling the
pandemic. That will remain the case as we work to keep Scotland safe.
We know, however, that because of the incredible efforts of the people of Scotland
and the vaccination programme, better times lie ahead.

The question we face as we come out of the health crisis is this: who has the right to
decide the kind of country Scotland should be after the pandemic?

Should it be the people who live here – or Westminster governments?

The Scottish Government believes that the people of Scotland have the right to
decide how Scotland recovers from the pandemic and what sort of country they wish
to build after the crisis. To ensure the people of Scotland have that right, the Scottish
Government believes there should be an independence referendum within the next
term of the Scottish Parliament once the public health crisis is over.

The evidence of recent years tells us what will happen if Westminster maintains, and
tightens, its control.

The jobs recovery we all want to see will be held back by the permanent hit of a hard
Brexit which is already hitting our economy.

There will be no legal guarantee that our NHS will be safe from post-Brexit trade
deals.

The steady and systematic undermining of devolution and the Scottish Parliament
since the Brexit vote is likely to continue.

In an independent Scotland we will always get the governments we vote for. As we
recover from the pandemic those governments will put Scotland’s economy – not
Brexit – first.

Protection of our NHS and control of Scotland’s abundant resources as well as
spending and taxation decisions will be in Scotland’s hands.

If there is a majority in the Scottish Parliament after the forthcoming election for this
bill there can be no democratic justification whatsoever for any Westminster
government to seek to block a post-pandemic referendum.

The timing of that referendum should be a matter for the next Scottish Parliament to
decide, taking account of the state of the pandemic. The Scottish Government
believes that it should be within the first half of the next parliamentary term, when it is
safe to do so.

Scotland’s recovery should be made in Scotland by the people who live here and
who care most about Scotland. That is why Scotland’s future should be Scotland’s
choice.

So there we have it – a bill for a referendum that will go through Holyrood if the SNP wins a majority in May.

Interestingly, there have been rumours of talks between the SNP and Scottish Greens about a possible coalition government, irrespective of May’s election result, to give a supermajority in government in favour of independence. Although the Greens are said to have ruled this out at past conferences, Patrick Harvey has recently expressed his support for such a coalition. So we will see what happens.

With the Hamilton report now behind us and the Holyrood committee report descredited by leaks to an irrelevance, although sadly the women concerned have had no satisfaction, it looks as if events could move quite rapidly towards May’s election campaign and laying the ground for an indyref.

Which brings us neatly to the second issue referred to.

After months of endless nastiness and he said, she said allegations and accusations the Hamilton Enquiry report was published just a few hours after the draft referendum bill.

James Hamilton is an Irish barrister and administrator who served as the Director of Public Prosecutions at the Republic of Ireland’s Office of the Director of Public Prosecutions from 1999 to 2011. In September 2010, Hamilton was elected President of the International Association of Prosecutors. In 2013 Hamilton was appointed by Alex Salmond as an independent advisor to the Scottish Government on the ministerial code, and in 2015 reappointed by Nicola Sturgeon. He was also appointed to the same role by the Welsh Government.

So let’s now get on with campaigning for a May victory and ensuring independence.