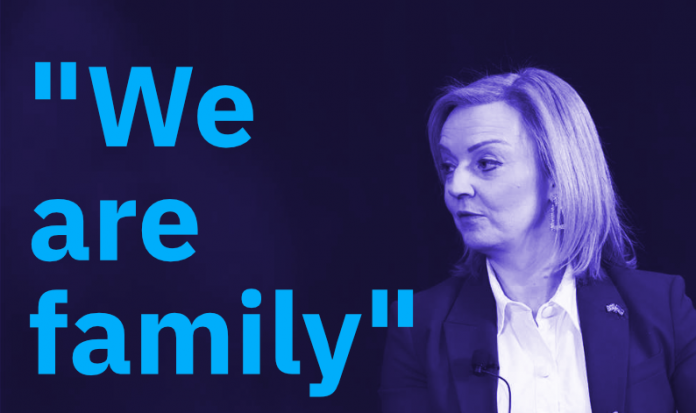 Molly Pollock takes a look at what family means in the real world and the importance Scotland places on being part of a much bigger family of nations.

“I consider myself to be a child of the union. To me we’re not just neighbours, we’re family and I will never ever let our family be split up.” Liz Truss

Childish posturing. I wouldn’t have been surprised if Truss stamped her Clark’s sandals on the playground concrete as she uttered those words.

“I will never ever let…” Sounds so authoritarian, not the sort of language expected in what is said to be a voluntary democratic union of equal partners.

“I will never ever let…” Such a didactic, controlling attitude is hardly the best way to foster harmonious, co-operative, trusting relationships within a family or organisation. It’s more likely to lead to conflict and breakdown.

“I will never ever ever let…” Sounds very like words from someone who perceives themselves head of a dysfunctional body. Hardly a caring or constructive attitude to want husband, daughters, sons, father, mother, sisters, brothers, colleagues in an organisation to be trapped within a grouping with no ability to leave. According to Wikipedia, Truss married in 2000 and had two daughters so both must be around the age of leaving or have left home. Wonder how she dealt with that splitting up of her family, what her reaction was when they wanted to stretch their adult wings and leave the nest?

“I will never ever let…” A functioning family or organisation grows with experience, preparing children and colleagues to take their place in more senior positions, fostering innovative thinking and actions. Part of rearing children is encouraging them to make their own decisions, stand on their own feet so they are able to play their role in an adult world . That shouldn’t result in broken relationships, unless there is abuse.

“I will never ever let…” Really? So what happens if conflicts lead to irreconcilable differences, if a family member or colleague is just as determined as you to go his/her own way? Will you sack them, cut off contact, imprison the person in their room or office, employ coercion to enforce your own stance? Do that and you destroy the family or organisation.

That same Liz Truss who used the family metaphor in her speech and who insists she’ll “never ever let our family be split up” wasn’t bothered about splitting up her own family. Between 2004 and 2005 according to Wikipedia, she had an extra-marital affair with the married man the Conservative Party had appointed as her political mentor. Nasty perhaps to mention that, but then denying democracy is also nasty for those involved.

A child of the union

Like Truss, I’m also a child of the union, most of us in Scotland are as we grew up within a Scotland that was an acknowledged part of the union. But that union is now very different to what most of us experienced whilst growing up. Then, we were led to understand it was a union for us all, a place where we would all be treated equally, where our votes and voices mattered. When a Prime Minister spoke we believed, whether we voted for his party or not, that he had the best interests of us all, and the whole of the UK, at heart. That we all mattered as it was our input that kept the union going.

The Blessed Margaret as she was called by some

Then came Margaret Thatcher and those beliefs were shown to be naive, very wrong. Thatcher didn’t represent what so many of us in Scotland believed in, and we had to stand by, powerless, whilst we watched industries we were proud of and which had provided work for generations, scythed from our landscape. Manufacturing, building things and creating things no longer mattered and were swiped to the scrapheap. Financial services were the future, we were assured. Trouble was many millions of unemployed were not equipped to work in financial services.

Living through the Thatcher era, through the times when nearly everyone you knew had lost their job, was on the dole, apprehensive, scared, at a loss as to how they would pay the mortgage or rent and feed their families, was not an ordeal I ever wanted to experience again. Yet here we are. Another Tory government, a posturing Thatcher wannabe set to win the Tory leadership whilst the outgoing PM parties and holidays as we slide into a financial abyss. Neither Sunak nor Truss seems to have a clue how to tackle the tsunami heading our way, and though Sunak indicates more grasp of the situation than Truss, 160,000 Tories, desperate for a return to the glorious days of Empire, will determine the outcome of the contest and seem to have settled on Truss. Maybe it’s her dressing up as Maggie that appeals as it surely can’t be her handle on government or her stateswoman approach.

When it comes to Scottish independence both sing to their base supporters: no referendum ever. We will not ALLOW it. “I will never ever let…” Democracy, it appears, is only espoused by modern unionist politicians if it suits their political purposes and choices. So rubbish, demean, disparage, sideline, malign, undervalue, bad-mouth our democratically elected First Minister, Scottish government, and everyone in Scotland who has voted for change, for the chance to vote in a referendum to determine whether or not we want to be independent with the brighter future we believe that will bring.

Once in a generation is trotted out repeatedly along with all the old bearded tropes, mantras and jingles of the 2014 campaign. We were accused then of wanting to make family members into foreigners because they stayed on one or another side of the border. Since then, of course, Brexit has made millions of families and family members foreigners, but that appears to be different.

We who lived through the Thatcher era are no longer children. Events have changed attitudes too, so many of us no longer see our future as part of a union we have been slowly but steadily moving away from, politically and socially, over the last fifty and more years. Us children of the union are now adults who have considered and researched and now believe we have outgrown a union which has failed to change, failed to adapt to changing circumstances and a changing world and which wants to bury itself in the past..

We in Scotland who believe in independence for our country see our families as modern European, perhaps even world-wide families. Membership of the EU brought us into closer contact with other countries and cultures which we embraced. Many of our family members went to work, study, live in EU countries, marry. Their children in turn have backgrounds in numerous other countries and cultures, welcoming these as it enriches their lives. For many the EU became a real family of nations.

Family splits from the Clearances onwards

Now Liz Truss says she will “never ever let our family split up”. Well, I have news for her. Families in Scotland were split up centuries ago, from the time of the clearances onwards when so many were shipped off to Canada, Australia and other far-flung places. But no matter the distance or country they remained members of the family. The depression in the 1920s saw many more leaving in search of work, often to South Africa and India. Weekly letters kept them in touch. I have inherited a pile from pre-independence India. Those who left were never regarded as anything but family, close family who mattered.

Thatcher’s scythe saw many leaving Scotland for London and with others from elsewhere in the UK to work in Europe. Remember the TV series Auf Wiedersehen, Pet with seven British construction workers travelling to Germany to work on a site in Düsseldorf to escape Britain’s ever-growing dole queues? These seven remained part of their families, never outcasts or strangers.

We who want independence aren’t splitting up a family. We’ve just grown up and believe it’s time to move out into our own pad so we can live the life we want to lead. There will still be phonecalls and emails to those we leave. We’ll still stay in touch, but we want to organise our own lives.

Lest any if this gives the impression of Scotland being an inferior or second-class country, please remember Scotland has a long and proud history in which our alliances were often with France rather than England which was not often part of the family, and earned the moniker of the auld enemy.

Instead of vacuous rhetoric, Rishi Sunk and Liz Truss, rather than making ever greater fools of themselves, should take up our First Minister’s offer to debate the independence issue, putting forward the case for the union, and then let the electorate in Scotland decide in a democratic referendum. That would be the grown-up, statesmanlike way forward.