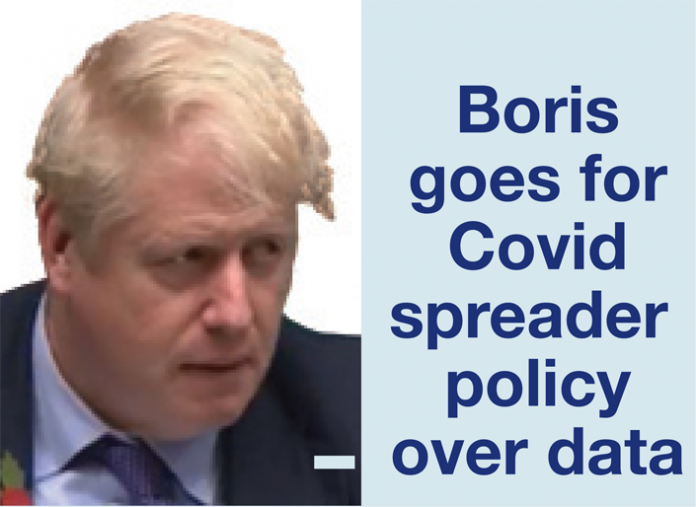 It was supposed to be data not dates but all the talk of ‘Freedom Day’ gave an announced date precedence over data, despite warnings from SAGE and other health professionals. The global situation is deteriorating rapidly with new variants that were known to be more dangerous now showing up in a surge in new cases across the globe. As WHO’s Director General said in today’s press conference: “the Delta variant is spreading at a scorching pace.”

Football, the passion of many, has given rise to a series of spreader events as we have seen both before and after England’s exit from the Euro football 2021. Scotland also saw a major increase in the wake of the Scotland/England game. That now seems to be tailing off but the rise South of the Border is beginning to take off and the pattern, based on international trends and Scotland’s experience, is a lesson Boris Johnson doesn’t want to hear.

The story that cases in Scotland were rising faster than in England per 100k in recent weeks was met with glee. Now it is England next and we take no pleasure in that, nor is it too late to backtrack. Johnson needs to decide what he wants his legacy to be – the man who gave Freedom Day to the virus, or the Prime Minister who was driven by the data and not his freedom what-ever-the-cost backbenchers.

We share a border with England as does Wales, who are also opting for a more cautious approach. The coming Covid increase in England will escape north and that is the lesson of Scotland’s recent spike.

Opening remarks by WHO Director-General in press conference 12th July

1. Last week marked the fourth consecutive week of increasing cases of COVID-19 globally, with increases recorded in all but one of WHO’s six regions. And after 10 weeks of declines, deaths are increasing again.

2. The Delta variant is ripping around the world at a scorching pace, driving a new spike in cases and deaths. Delta is now in more than 104 countries and we expect it to soon be the dominant COVID-19 strain circulating worldwide.

3.The global gap in vaccine supply is hugely uneven and inequitable. Over the weekend, the G20 finance ministers recognized the importance of funding the ACT Accelerator so that the world can ensure tests, treatments and vaccines are distributed equitably and I hope this translates quickly to filling the $16 billion funding gap.

4. AstraZeneca has led on licensing their vaccines around the world to increase vaccine capacity quickly. As well as Europe, India and South Korea, I am pleased to announce two more manufacturing sites, in Japan and Australia, which have now received a WHO Emergency Use Listing, bringing AstraZeneca’s EUL’s to five. We need other manufacturers to follow this example.

We cannot continue with indefinite lockdowns and require a cautious strategy that firmly keeps in place – MSS: Masks, Social distancing and Sanitisers. We have seen around a 400% increase in hospitalisations and ICU places since the end of May . We cannot allow the NHS, in any of the four nations, to become overwhelmed with Covid cases again.