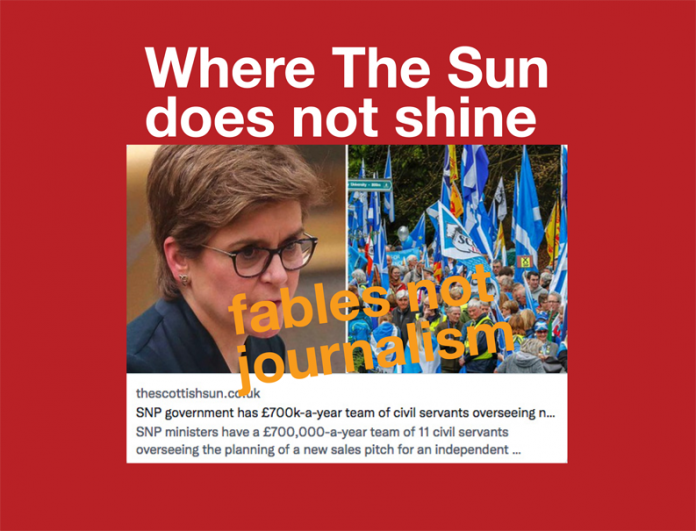 Chris Masson writing for the Scottish Sun produced a weird article on the cost of a handfull (eleven) civil servants working on independence preparations for the Scottish Government. The unionists are outraged that the SNP who won a mandate in May last year to progress a referendum on Independence are setting about implementing that mandate. We in Scotland have had to contribute to years of Westminster work on Brexit with vast numbers of civil servants working on the daftest reorientation of European policy imaginable.

Yes England voted for that and as a result Scotland is out of the European Union against our will. That’s how the union works and is the reason why everything has changed since 2014. Six years after the EU referendum the UK government is still fighting over the details of an agreement Johnson signed up to and which is still consuming thousands of hours of civil service time.

The other issue with Chris Masson’s article was it had no numerical context. Scotland’s 21,760 civil servants represents just 4.49% of the UK total. The Welsh government has 5,700 civil servants and only one agency, Welsh Revenue Agency with 120 employees.

The Ministry of Defence has 56,780 civil servants in total, including a number of agencies. One of those agencies is the Submarine Delivery Agency employing 1,800 civil servants. Don’t ask. Other big departments include the Home Office 35,370, HM Revenue and Customs 62,940, Justice 78,880 where Prisons and Probation accounts for 54,030 civil servants and would appear to indicate Scotland is doing rather better in this area. The largest number of civil servants, 90,950, are employed in the Department of Work and Pensions.

One area where numbers for England and Wales seem low is the Dept of Health and Social Care with 3,520 civil servants. The Medicines and Healthcare Products Regulatory Acency adds a further 1,330 civil servants and Public Health England, now renamed The UK Health Security Agency, with 6,910 civil servants.

What happens on Independence?

Scotland will need more civil servants to deal with areas currently the remit of the UK Government. That has advantages for employment and also taxation income with all our civil servants based in Scotland. Taking over areas the Scottish Governent does not have powers over at present is what will deliver the independence bonus with civil servants delivering policies determined by an independent Scottish Government. Instead of the endless Brexit fiasco Scotland will be able to put civil servants to work on the process of Scotland rejoining the EU. The Labour party and the Lib Dems have no plans to rejoin the EU. All unionist parties are super glued to Tory Brexit despite the economic damage to all parts of this Disunited Kingdom.

For now nothing much is happening on Brexit as both sides are sitting it out till there is some clarity on UK internal affairs. Why deal with Johnson if he ends up getting replaced. Then there are elections in May in N. Ireland which means the political situation there could look very different if the DUP is no longer the largest party as polls are indicating.

Those 11 Scottish civil servants doing preparatory work on the next independence referendum represent just 0.051% of all Scotland’s civil servants. The unionists know the number will increase in the months ahead as planning for what a post referendum Scotland will look like is what the electorate will be expecting answers on, not Boris Brexit Unionist Balderdash.

For those interested in the detail of Scottish civil servants at the time of the report:

MEP calls for Scots humanitarian charities to make use of EU...

EU vetoes report on the ‘consequences’ of independence

Tories intent on starving us into submission