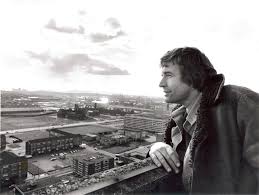 Willie Mcilvanney, who has died at the age of 79, was very important to me and many other Scots.

This is not an obituary, there will be many of those by people better qualified to pay tribute to one of Scotland’s finest writers. It is a personal reflection from someone who, like Willie, came from a working class background in Kilmarnock and who talked to him over the years.

Willie was perhaps the finest Scots novelist of our post war generation, but as he would always remind me, he was born before the war. He was also a fine poet, a great journalist and a wonderful speaker at public and private gatherings. I felt particularly close to him as he was a Kilmarnock boy like me and one who learned his love of literature not so much from Kilmarnock Academy (where we both went), but from his parents and communist party relatives, in his case his uncle.

Willie always said “don’t knock the communist party they were responsible for educating a generation of Scots with a love of literature and culture in the broadest sense of the word”. I was born into a house in Hurlford just outside Kilmarnock known as ” The Kremlin” as it was the headquarters of the local Communist Party. My parents were party members and my uncle Alec was the full time organiser for Ayrshire. In that small village of 2,000 people over 100 copies of the Daily Worker were sold every day. So Willie Mcilvanney’s death should remind us of the importance of the Communist Party in Scottish political and cultural history.

Willie’s life was also a story of working class advancement not necessarily because of our schools system, but despite it. In his undervalued novel The Kiln he vividly evokes growing up in Kilmarnock and attending Kilmarnock Academy in the 1950s. He shows the pressures on working class kids attending what people forget were very middle class schools in those days.

Academies took only around the top 20 per cent in ability terms, measured by the eleven plus exam and, as sociologists showed, what was meant to be an academic selection became effectively a social selection where the sons and daughters of Kilmarnock’s middle class predominated and where working class pupils like Willie and I felt we didn’t quite belong. Indeed as Jackson and Marsden’s seminal study ” Education and the Working Class” showed, those working class kids who made it to grammar schools, as the Academy was, came from untypical backgrounds where the parents had books in the house or indeed politically active relatives like Willie’s uncle.

In the Kiln, Willie discussed the pressures on him, the temptation to leave at 15 and go to work in the local brickworks and to earn money not just to help with the family income but to buy all the cool things that stylish young men wanted in the 1950s (and Willie was always stylish!). He resisted that pressure and decided to stay on at the academy, go to Glasgow University and become a teacher. I despite my parents wishes, left school at 15 , indeed I was kicked out the Academy by the eminent Rector, Dr Mcintyre, who said:  “Kerr it’s time you joined the world of work. I don’t think you fit in the Academy, your report card is underlined in red and if you ever need a reference from me it will be a very bad one.” Many years later I reviewed the Kiln for Red Pepper magazine, and reflected: “Fortunately after collecting three degrees, becoming a university lecturer and an MEP, I never needed a reference from Kilmarnock Academy…”

I was not the only working class pupil to be rejected in this way. Indeed many of my friends were similarly rejected by the middle class ethos of the school and were encouraged to leave at 15. Later they would go back to study and become teachers, social workers, engineers and so on. There was a great myth about Scottish education in the past being different, more inclusive.The truth is that our system was every bit as class ridden as was the English system at the Grammar School/Academy level and of course the private sector although smaller in percentage terms in England is just as important for recruiting Scotland’s elite as public schools.

The fact that Willie Mcilvanney survived this pressure and went on to university suggests a strength of character as well as teachers who encouraged him.

Willie was important to Scots literature for his epic early novel Docherty, which told the story of the working class in Kilmarnock around the First World War. Willie did for the urban working class of that period what Grassic Gibbon did for rural life in A Scots Quair and Docherty rightly bears comparison with that great novel. My grandfather Jacob Kerr, who was an independent socialist councillor for Hurlford and Riccarton in the 1920s read and verified the accuracy of Docherty as a testament of the period. Willie also updated his chronicle of working class life in his novel The Big Man which shows the decline of mining villages in Ayrshire in the 1960s. This was something which was close to me as I attempted to go down the pit when thrown out of the Academy in 1959. Fortunately I failed the exam for a craft apprenticeship down the pit otherwise I fear I may  have predeceased Willie.

He was also important as the first exponent of what has become known as ” tartan noir” with his Laidlaw novels, the Glasgow detective who bears a distinct resemblance to STV’s Taggart. Willie himself believed that STV had ripped off the concept, and not wanting to pay him ,had commissioned scripts from other writers. With over 300 Taggart episodes produced, Willie might have been a very well-off writer instead of a comfortably-off writer. Indeed the comparison with Ian Rankin’s Rebus novels are striking, Ian himself would agree that Mcillvanney is a better writer but of course the tie in with the TVs series have made the Rebus series very profitable. Rebus also crossed the border and sold well in England and further afield. Mcillvanney has always been seen much more as a Scots writer who didn’t sell so well south of the border.

This raises the question of how Scottish is Mcillvanney? The answer is of course very Scottish,but this doesn’t make him unintelligible to English readers and I have turned quite a few on to his work. Talking to Willie about the Academy, we both remarked on how little focus there was on Scottish writers. Apart from occasional references to Burns, Scots literature hardly featured in the curriculum. The only Scots novel I remember being recommended was ” The House With The Green Shutters”, a rather bad early social realist novel. At a book festival event some years ago Willie named six great writers who influenced him early in his career, none of whom were Scots. This again reflected the lack of focus on Scots literature and indeed Scottish history and culture in Kilmarnock Academy and no doubt many others. We were effectively subjected to a colonial education in the 1950s and it is to Willie’s credit that he escaped from this to write authentic Scots working class literature.

Willie took the rediscovery of Scotland’s identity seriously not just through his novels but his brilliant journalism in the Herald. His Saturday columns in the paper, reporting the thoughts of the characters in his local pub were often the high point of the weekend. His speeches to big audiences at SNP conference or to smaller audiences at book events were always sharp and to the point and increasingly focussed on independence for Scotland.

Willie was not a biscuit tin nationalist, wanting to wave the Saltire, but a socialist and an internationalist  who realised that an independent Scotland was the only way to create a different kind of society. Scotland was “a mongrel nation” to Willie, but one he thought independence could make better. His kind of politics helped move many traditional socialists like me towards supporting the SNP.  In discussion Willie regretted the tragedy of the break up of the SSP and said it would take a generation for the socialist left to become important again. In the meantime the SNP would be where the political action would take place. This analysis led me and many other socialists to join the SNP and help give it a more social democratic feel. The traditional Labour charge of ” Tartan Tories” would be seen to be increasingly silly, not least when Labour got into bed with the Tories in the referendum campaign.

Willie’s brother Hugh is perhaps Kilmarnock’s second most famous son of the recent past. Hugh began his journalistic life on the Kilmarnock Standard and rose to become the finest sports journalist of his generation. Last year BBC Scotland paid tribute to both the famous brothers with a lovely half hour film that took them back to their roots, with them reflecting on their upbringing and their love of sport, literature and life. I hope BBC Scotland will show that film again as a tribute to Willie Mcilvanney, a Kilmarnock boy who left an important impact on Scottish literature, culture and life.

Hugh Kerr is a former MEP who like Willie Mcilvanney began his education in Kilmarnock Academy in the 1950s.

Only mongrels here: independence and an open country

Cox murder a tragic conclusion to an ugly referendum campaign