Why won’t the Royal College of Nursing show us the full results of their survey? Are Scottish nurses less worried than English ones? Is that it?

The RCN press review titled: ‘A survey of more than 10,000 RCN members from across the UK shows only 10% think the health service is currently able to meet demand’ was released on the 17th June to selected UK mainstream media and generated, among others, the following headlines the next day:

The BBC, Scotsman and Telegraph articles seemed to be based only on a study of 1 000 Scottish nurses. The Herald and Daily Record reports seemed to have UK data for 10 000 nurses. All four newspapers asked the SNP government and Anas Sarwar MSP, what they thought about it. Isn’t Ruth Davidson the leader of the official opposition these days?

As often before, I thought I’d try to get a look at the full report. You never know what might have been missed by busy reporters. In the past I’ve discovered that a breakdown into English, N Irish, Welsh and Scottish figures can tell us something more meaningful, especially for a Scottish audience.

I contacted the RCN media centre, asked for the full report and got a very quick reply. Imagine my shock, dear reader, when I saw this:

‘There is no accompanying report I am afraid. We are instead releasing the data through various media stories.’

I asked ‘Is that allowed? Don’t you have to have a full report available to the public?’ I got:

‘It was a survey of 10,000 members and we are using the data gathered from the survey to produce a variety of different media stories – both this weekend and during the rest of the year. It’s a standard PR tactic.’ 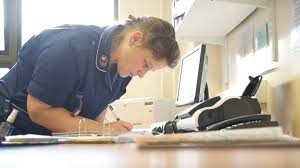 I made a Freedom of Information request which they have ignored. I know they they’re not required to do so but I thought I’d try to shame them. So, they’ve got the results of a survey and they’re not going to tell us anything about the sample, the response rate or the framing of the questions? Mind you, I gather it’s a standard PR tactic, so that’s OK then, isn’t it? Well at least they’re honest about it…

As well as wanting to see the Scottish data, I was also particularly keen to have a look at the survey questions. In surveys carried out themselves, by trades unions or so-called ‘professional associations’, of their own members, whose interests are their prime purpose, they need to be very careful not to ask questions that prompt the very answers you would expect, unless, of course, that’s why they were doing the survey in the first place.

So, if you ask a group of nurses, teachers, GPs, social workers or the members of any ‘caring’ occupational group, where the outcomes of their efforts are infinitely improvable and can never be fully met, to agree or to disagree with statements like these:

‘We are not coping with the demands of our….’

‘My line manager is not able to provide….’

‘My department is understaffed’

Then be prepared to discover that a very large majority will agree that things are bad, very bad indeed. Nine out of 10 nurses thinking the NHS is not coping may be quite good in the circumstances. If I may quote the ‘Four Yorkshire Health Board Administrators’:

Seriously, though, where does the RCN get off, feeding the media with selected titbits to scare the old folk and make the SNP work for their money? Don’t we have the right see the full report if they’re going to pretend they did a proper survey?