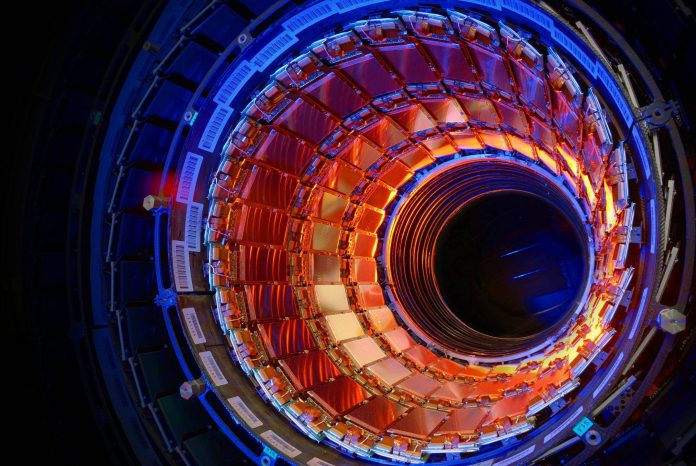 Ever since Brexit slaughtered the goose that laid the golden cash cow’s nest egg of EU scientific funding, staff at Paisley’s Heedrum-Hodrum Collider have been reduced to mooching around the facility for weeks on end, dissecting cow’s eyeballs, splitting and re-assembling the occasional atom and generally messing around with their chemistry sets, just to keep their hand in.

Then, yesterday morning, a mould-breaking paradigm gear shift of quite literally cosmic proportions rocked the collider’s normally un-rockable scientists to their polythene overshoes. In an effort to mitigate the financial hiatus caused by Brexit, the collider had been rented out as a makeshift pizza oven to nearby Luigi’s Restaurant, who’d used it for super-heating their filled crust offerings by bombarding them with quarks spun to sub-light speed.

Business boomed. But melted cheese dripping into the whatchamacallit of the thermal gizmo shorted out the spark plug, causing a malfunction in the collider’s Vintage Goblin Teasmade (model 860) based timer.

‘To spare you the E=Mc squared of it all,’ Professor Vier explained to my colleague, Newsnet science correspondent Achiltibuie Hughie, ‘let’s just say that a wormhole opened in space-time, and the Heedrum Hodrum Collider transformed itself into … The Time Tunnel.’

‘You could have knocked me over with David Davis’ mini-pamphlet of post-Brexit impact assessments. One minute I was stuffing my coupon with dripping wedges of a Texas Meat Meltdown; the next I was jogging down the Time Tunnel … to arrive in 2025. I witnessed political events on which the eye of man has never set foot,’ the professor said, before going on to describe an apocalyptic vision of our near future …

Forward to the past

The professor’s detailed depiction of the wift and waft of Brexit’s shabby tapestry chilled Achiltibue Hughie to the marrow. ‘By 2025 the UK had indeed Brexited,’ said professor vier, ‘but details of a fabulous post phase-one trade deal were still being thrashed out. Phase one, of course, contained more fudge than a baker’s tray of Granny McKechnie’s Olde Fashioned fudge-flavoured cheesecake. ‘Let’s face it, the Irish border, divorce settlement and freedom of movement agreements would have made more sense had they been written in ancient Cambodian.’

‘The new conservative Prime Minister, Michael Fabricant, whose Dali-esque hair-do had recently been officially recognised through an act of parliament, as a homage to Boris Johnston’s iconic haystack, itself a tribute to Donald Trump’s crowning glory, had appointed himself chief negotiator for the UK’s re-entry to Europe.

Heading the Better-Together-After-All campaign team is Sir Pottifer Cormack, an arch Tory from a family so in-bred that genealogists could prove he was his own big brother. Both sides have given their negotiating stances shape. The UK’s stance is shaped like a biscuit tin that has been run over by a tank, while the EU’s is shaped like an Exocet missile. The EU has accepted, in principle, that the UK can re-join, but insist that it must first formally leave, and that this cannot happen until it signs off on the bad exit deal it worked so hard to achieve in 2018. Only then can negotiations to get back in,’ start.

A copy of the Telegraph (circulation 12) showed a picture of Mr Fabricant’s wig with him suspended beneath it, saying, ’We are confident that a bad deal can be reached by Christmas. But we cannot see why Johnny Foreigner continues to refuse to allow parallel trade talks, so that we can begin to clamber back in while simultaneously concluding a bad deal for getting out.’

Professor Vier continued: ‘Mr Fab saw no reason why the original Brexit strategy which combined ill-founded confidence, magic thinking and flat-out denial, would not work again. This time, however, messages from the government would be strictly controlled. To this end, David Davis, the Smug-meister himself, has been promoted sideways to head the newly formed Ministry of Internal Guff, Hot air and Total Yoonery (MIGHTY). As an opening gambit, Davis’ MIGHTY team demanded that negotiators on both sides use Scissors, Paper, Stone as the principal means to settle differences of opinion as this was far easier than having to think about the complex issues involved and come to a reasoned conclusion.

‘I can also reveal,’ said the professor, ‘that in 2025, the television license fee is £800 and that the BBC has introduced the death penalty for anyone refusing to buy one. In addition, the national debt has reached £2.6 trillion, or £100,000 per household. In 2023, the government passed a bill to compel anyone of working age to pay back their share of the debt by direct debit at £1 per week.’

‘By our reckoning,’ the professor said, this should clear the deficit by the time the human race has re-grown gills and slid down the beach in a return to the ocean.

‘Unfortunately,’ the professor continued, ‘conditions for the man in the chip shop queue appeared to have worsened. Price increases on foodstuffs have ramped up significantly. It is not uncommon in 2025 to see bands of marauding shoppers chase shelf-stackers with pricing guns up and down the aisles in ASDA like the Berkshire hunt after a fox, trying to snatch a box of Jaffa cakes before the next price hike propels their little orange favourites beyond the clutches of their household budgets.

Neither have middle class families escaped the ravages of Brexit. Increasingly, as the cost of vegetables skyrockets, they are forced to choose between a cauliflower cheese supper, or a week in the Algarve, although this is a bit of a false dichotomy since the closure to Brits of European air space means that getting anywhere near the Algarve in 2025 requires holidaymakers to fly to Dover and swim to Portugal from there.

Putting food on the family table has become an ordeal since the Conservatives — in keeping with their long and proud tradition of breaking promises, dynamited pre-Brexit promises made to farmers to get their support. Farmers were subsidised by the UK government for the first 20 minutes after Brexit before being cut adrift in the biggest mass shafting of agricultural workers since the passing of the corn laws. Farmers have been urged by several multi-millionaire non tax-paying tories to innovate their way out of poverty.

Food hikes caused by sterling plummeting faster than a bowling ball through mist, have been exacerbated by the re-introduction of customs checks on EU imports at Dover, a town now twinned with Armageddon which was already twinned with Sodom and Gomorrah.

The Kent Lorry Park, formerly known as … erm …Kent, is now so large it has its own climate. Previously, juggernauts bearing continental goods passed through Dover with a nod, a wink and a hearty ‘bonjour’. Now, HMRC gangs administer full body searches and swarm over each vehicle as a prelude to rummaging through drivers’ overnight bags, and un-balling their spare socks in search of contraband.

A headline in the Times (circulation, 5) hints obliquely at broken promises to reclaim the seas, made to fishermen during Brexit: ‘CUCKOLDED COD CATCHERS CATCH BREXIT COLD.’

Professor Vier shook his head. ‘Just before coming back through the Time Tunnel, I witnessed food security storm-troopers pin a man to the tarmac of a Sainsbury’s car park. The blagger had broken the security tag off a carrot and made a dash for the perimeter fence in an effort to avoid paying the £48.50 asking price.’

‘And as I turned to look back at the future for the last time, I saw a multinational flotilla chasing across the horizon in pursuit of the North Sea’s last haddock.’

‘Was there any good news from the future?’ Achiltibuie Hughie asked. ‘Some,’ replied the professor, ‘In a triumph over EU bureaucracy, British passports will once again turn blue. ‘That’ll teach’em’ a lesson they won’t forget,’ Brexit’s chief tilter at windmills, Mrs May Treeza, said. Even though, as Guy Verhoffenhafferstaffen pointed out, ‘There never has been a restriction on the colour of a UK passport. They could have had a lilac coloured cover embossed with an image of Queen Boadicea with her tits oot if they’d wanted one.’

Brexit – At last, the government’s brilliant hand is revealed!