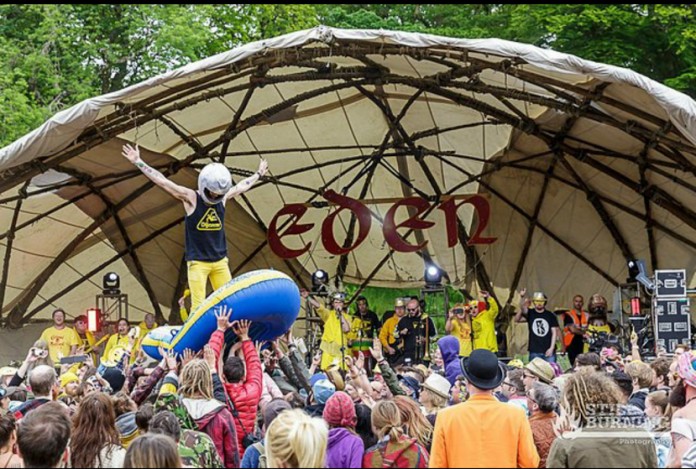 Everyone’s Happy. Everyone’s smiling. No one here is sad anymore.

So begins the new single, ‘These are Not the Drugs (you are looking for)’, from Colonel Mustard and the Dijon 5, recent winners of the Scottish Alternative Music Award for Best Live Act, and deserving a nod for one of the best band names in Scottish history.

Not only in name, but musically reminiscent of the Beatles during their acid days, this is a Sergeant Pepper’s for a post-Leah Bett’s age. Though many of their younger audience may not know her name, they will still be feeling the consequences.

A young girl losing her life after consuming ecstasy, a story made new in the Arches in February last year, led to the demonisation of pills and their associated dance scene in the early nineties and the media manufacture of a generation of parental warnings. Take drugs and you will die.

Unless, of course, the drugs are sold to you by a license holder.

These are Not the Drugs is infectiously upbeat, at once calling for the safe legalisation of everything and interspersed in the extended edit with guest anecdotes about the effects of certain substances from Dougie O’Neil (Mickey 9’s), and Mark McG (Girobabies) seeming to reinforce the chorus:

These are not the drugs you are looking for

These are not the drugs, can I have some more?

We are all conceived as addicts. Born into a world that teaches us almost immediately that our wants are needs. If we are in pain we reach for a pill, unhappy we are dosed and, above all, if we want to socialise we are provided with alcohol, caffeine and social media.

Natalie Angier, in her phenomenal book ‘Woman. An Intimate Geography’, tells us that the womb ‘fabricates drugs that in other contexts would be illegal’, citing the discovery in the late 1990s that the womb produces anandamide, ‘a molecule almost identical to the active ingredient in marijuana’ and two natural opiates, ‘chemical cousins to morphine and heroin’. While there are no definitive scientific conclusions as to why it does so, Angier presents one of the theories concerning anandamide:

“The uterus produces the marijuana-like compound in an optimal dose at just the spot where attachment should take place. The embryo has on its surface receptors for that marijuana-like molecule. When it is several days old and ready to fasten itself to the uterus, it moves toward the designated site of attachment and becomes literally hooked, embryo receptors clasping cannaboid proteins. Now the embryo can invade the wall of the uterus.”

She compares anandamide to cannabis only in its coincidental biological similarities: “Yet it is a pretty coincidence. The cannaboid offers to the embryo in hard currency what it gives the recreational mystic only in fantasy: the path to enlightenment.”

To take this theory further, our drug laws seem laughable: arbitrarily declaring which drug is good and which bad, resulting in the criminalisation of victims. Why is “junkie” a greater insult in this country than say “arms-dealer”, “warmonger” or even the latest in media trends “pig-fucker”?

Why are we forever chasing that dragon in its many forms? The embryo in Angier’s theory is tempted by an offer made at a critical point in its journey, our first, and most important to our existence, fight or flight moment. The desire for the drug is the key.

Nobody sets out to become an addict. But there are an endless supply of psychological, circumstantial and social reasons to attach yourself to an addictive substance.

At the heart of this is a desire to feel part of a community and a family, and all the anxiety and risk that this desire poses. Organised religion, for example, could not have survived millennia without this human desire. Neither could your local pub.

Everyone’s happy. Everyone’s smiling. No one here is sad anymore.

Colonel Mustard and Dijon 5 have all the makings of a cult. They are part of the Yellow Movement, an arts collective with a DIY ethos and a philosophy preaching familiar mantras of loving yourself and those around you in a uniform of bright yellow.

Friday will be the first time I will see the band play live, though I was so confident in their reputation that I had already written about their win a few days before the SAMA results were announced.

If you find yourself anywhere near where the Dijon 5 are playing and you will see glimpses of yellow became a sea around you as the band and their converts adorn passers-by with the colour in the form of stickers, ribbons and tshirts.

I watched a Colonel Mustard-led procession wind itself around the festival site at Doune the Rabbit Hole this year, gathering artists, musicians, revellers and a few skipping children and dogs, all in yellow making their way to the stage. There’s a reason why the band refer to their audience as the ‘6th Dijon’.

Something pagan and primitive is definitely at play here.

It’s seen in the video for the single too, this time the audience at Kelburn, all wearing masks with a simple yellow smiling face, dancing and chanting along with the band. This is a summer anthem for the heart of these music festivals, a chance to reconnect, relax and rejoice in our brief Scottish sunshine away from the stress of the city.

Everyone’s happy. Everyone’s smiling. No one here is sad anymore. 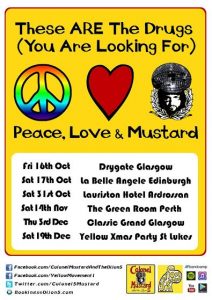 Become the 6th Dijon and catch the yellow fever at their appropriately named single launch tour: These ARE the Drugs you are Looking For, at the Drygate, Glasgow this Friday (Oct 16) & La Belle Angele Edinburgh Saturday (Oct 17). 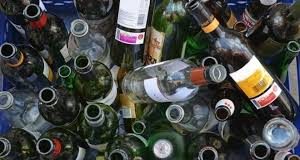 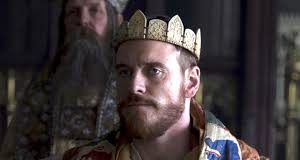 Macbeth, the task of recognising grief and learning to move on