As I write this on Wednesday, exactly one week after returning to Scotland to vote in the EU referendum. One week ago we left our hotel in Rhodes at 5p.m. Greek time after two sweltering weeks. Whilst soaking up the sun to ease away a dreich Scottish winter, the referendum was never far from our minds.

Amongst the many international visitors there were not a few from England. As on previous visits abroad we failed to understand the Brit need to dress in Union flag t-shirts, carry Union flag bags, hang English flags from balconies and use Union towels at the pool. There were French visitors, Italian visitors, German visitors, those from Scandinavian countries and a sprinkling of Russians. None were emblazoned with their national flags.

Is there something about our southern neighbours’ need to assert a place in a world long gone? One evening at an adjacent table in an outdoor restaurant under flowering bougainvillea, a young lady, well young in comparison to us, sang a couple of lines of Rule Britannia and no doubt firmly believed Britain could still send gunboats up the Yangtze if it chose to do so. It is a misbelief the campaign down south encapsulated, fighting a 21st century referendum grounded in the 19th – a time when most did not have the vote. We smiled at the outburst and wished them a pleasant evening when they left later. The whole tenor of the campaign down south was conducted in a bizarre manner.

No sooner was the result in, and after months of the Tories tearing themselves apart, the Labour Party in Westminster decides they should join the fray. After weeks of Boris versus Dave now we will have weeks of the Parliamentary Labour Party versus Corbyn to level up the column inches. If there is one glimmer of sensible protest it is young Remain voters demonstrating outside Westminster. It is difficult to think this might lead anywhere but is a welcome contrast to the incidents of racial hate unleashed by a few who somehow think they have ‘got their country back’. We live in an interdependent world with only countries like North Korea on the outside.

I do not wish to knock our southern neighbours when they are down, but they do not have the presence in the world they seem to think they have. The UK’s current account is a mess and the countries they think will sign new trade agreements already buy more goods from other EU countries than they do from the UK.

The US is the UK’s largest trading partner, accounting for 3.1% of US total trade. As a trading partner of the US, the UK ranks two places below Germany whose exports are worth 27.8 billion US$ compared to the value of UK exports to the US of 13 billion US$, marginally ahead of France’s exports (US Census Bureau, 2016).

The UK’s top trading partners in order of size are – Imports: Germany, US, Netherlands, China and France. Exports: US, Germany, France, Netherlands and Ireland (HMRC 2016). The UK has a long-term persistent trade gap, varying in recent months between £5 and £15 billion a month

John Redwood, the Conservative MP and a former Minister of State, was a vigorous campaigner for the UK leaving the EU. He argued the UK would improve its trade relationships when outside the EU. He has instanced China and India as examples with potential to increase UK exports. This argument hinges on the EU being an impediment to trading with countries outside the EU and that somehow the UK is especially handicapped in this regard by its membership.  If we allow for the possibility that, in the future, it is at least theoretically possible, that the UK could establish new trading relationships with the rest of the world it does not alter the poor starting position. Such a reconstruction would be in all probability decades in the making.

China is a country the UK imports from, our fourth largest import partner, but when it comes to exports the UK is nowhere to be seen. The value of UK exports to China was worth only £14.1 billion in 2014 (UK Trade and Investment, 2015). The UK does not rank in the top 40 of China’s import partners although there has been some recent growth. Germany on the other hand is China’s fifth largest import partner despite the ‘disadvantage’ of being a EU member.

India is a country the UK has a long association with and we might expect our exports to this Commonweath country to be holding up well. 49.4% of Indian exports went to other Asian trade partners. The UK continues to import from India, accounting for 3.4% of Indian exports. In 2011/12 UK exports to India amounted 7,666.17 million US$ or 1.57% of Indian imports. The UK ranked 21st as an import trading partner. Three EU countries plus Switzerland accounted for 13.66% of exports, to India – excludes other EU countries with a shares smaller than the UK. Both Germany and Belgium sold more to India than the UK in this period despite the supposed handicap of being members of the EU (Government of India, 2013) 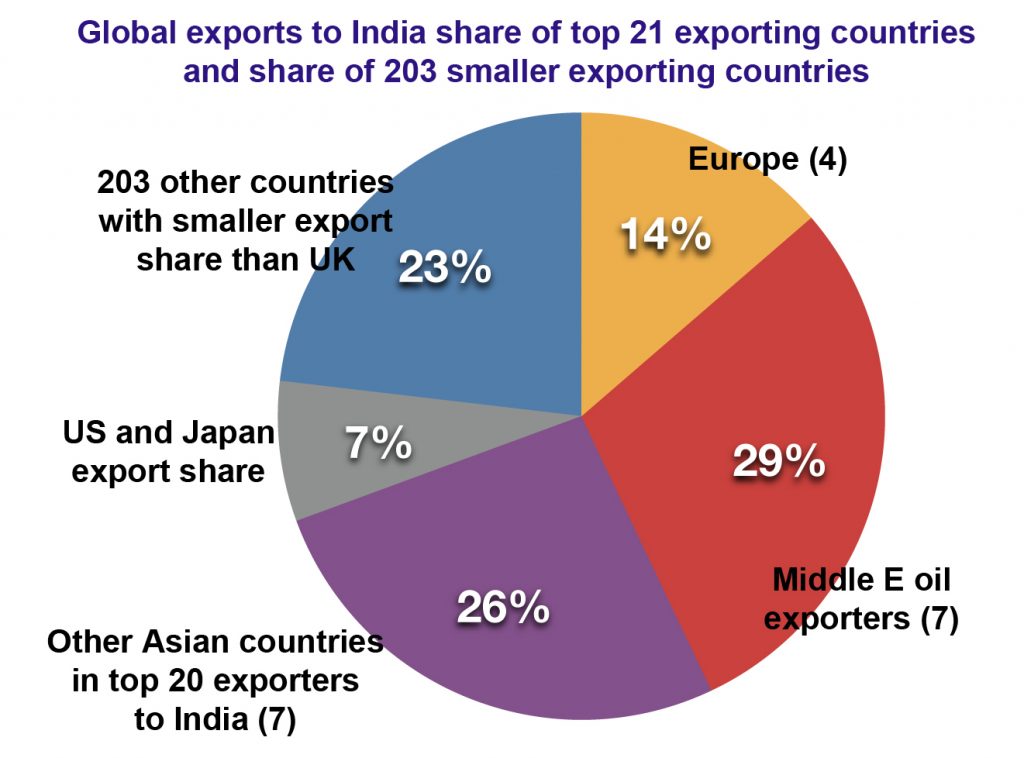 The US and UK both have large trade deficits. The UK has a small deficit in its trade with the US whilst Germany, Italy and France, and perhaps most significantly, Ireland sells considerably more to the US than they buy. The UK, the world’s 6th largest economy and Ireland, world’s 44th largest economy both have long associations with the US, have major trading partner status, are EU members yet seem not to be unduly disadvantaged by their EU status.

Two deductions can be drawn in relation to this analysis. Firstly there is strong evidence of a regional bias in the distribution of global trade, and secondly the UK performs poorly as an exporter in global markets where other EU countries achieve higher levels of export penetration, as does China, since it emerged as a major global economy. More surprisingly, export penetration in countries the UK has considerable links and history with are no longer major markets for UK exports.

The reality of world trade shows the strongest relationships are regional with only the major economies US, China, EU and Japan managing to break through and sell to the world. Outside the EU, with trade deals problematic, the growth of UK exports will be long in the making. Scotland is in a much better position and without Scottish exports rUK drops down the international league table. 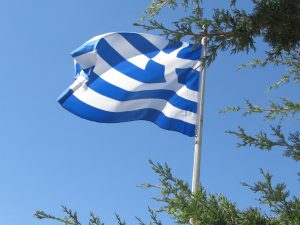 I will draw a veil over the infighting in the UK government and HM’s opposition. We all know where the real opposition in Westminster comes from these days. In comparison Scotland is at ease and determined to find a solution to prevent us being taken out of the EU against the wishes of the Scottish electorate. Four of the five parties in the Scottish parliament gave Nicola Sturgeon a mandate to pursue opportunity for Scotland to remain in the EU.

As Nicola Sturgeon heads for Brussels for exploratory talks with the EU, rUK can only begin discussions when they finally get round to moving Article 50, for which they need a plan. The Scottish government does scenario planning so that it can move quickly. Westminster ‘remains’ as much in the dark as an electorate and a media that failed to ask questions about what would happen when the UK voted to leave. Not to worry England – Boris thinks it will be OK!

As for flags, we saw lots of Greek flags when we were in Greece and a lot of EU flags. Despite not being well treated of late, the Greeks are still committed to the EU. We left our saltires at home where they belong. Now we are back we are looking them out again along and the other Union flag – that’s the blue one with 12 yellow stars.

There is a strange mixture of arrogance and inferiority in those who go to other countries wrapped in their own flag.

Did I mention that apart from the downgrading of all UK credit ratings and creating panic on world markets sensitive to persistent low growth, the UK’s growth rate has been cut from 1.6% to 0.6% (Stephanie Flanders, June 2016) for the rest of 2016? Oh well another time.