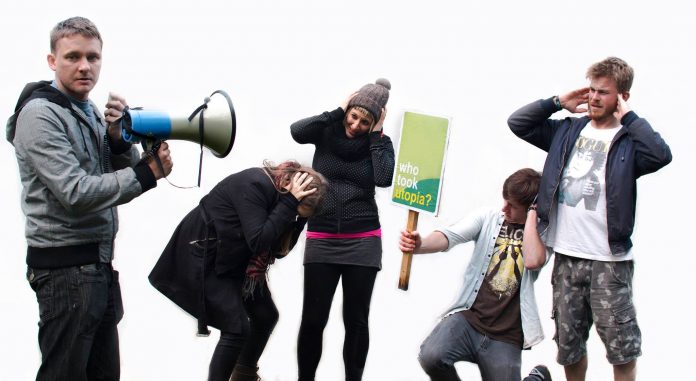 As we approach the anniversary of the independence referendum in Scotland it’s hard not to feel nostalgic for the energy that was tangible in the air this time last year.

The Yes Campaign, the ‘new media’ of online blogs and social media and the people themselves talked of an independent Scotland as a new society, a utopian dream.

Who Took Utopia? the new album from the Girobabies is a well-crafted pop punk album that manages to be political with no politics. The band have given us another question to consider, as frontman Mark’s lyrical satire takes us on a journey through joy (Equinox), reluctant alcoholism (the Tom Waits styled Late-Night Sketchy), anxious isolation (Planet Fort Knox) and finally freedom (Escape! Routine!).

Running throughout is a menagerie as the natural world threatens to take over. The only human presence is our increasingly nervous narrator, the landlord and ‘a condom on the beach’ (Ramp up the Theatre).

Instead seagulls follow us, slugs, snails and spiders creep in and Brian Rocket performed live has the audience chanting ‘The turtle is 150 years old’ before Mark questions us ‘how do they know?’

Musically the album is infectious, sounding like a Pixies album the Libertines might have wished they had produced with a confident Scottish accent: Instantly familiar and still capable of catching you off-guard.

Bring Potions, the first track on side B, sounds most like the band’s previous work and it’s interesting that it’s here that we hear the female vocal clearly for the first time. The addition of Jo (Twistettes) on bass and Jess on keyboard balances the band’s usual raw power, and each individual musician has room to breathe making it feel like the first finished work from the Girobabies’ meandering eclectic career.

The months leading to the referendum had a taste of revolution. Excitement and uncertainty. Fear and hope.

The battles fought were on the lamp-posts and the sides of overflowing bins, newly added for the Commonwealth Games. Yes or Naw. Aye or No Thanks. Stickers picked off, placed anew and ripped down again. This was the debate realised in the city of Glasgow.

We had good summer weather, heads were held high and people met your eyes in passing. Community was breaking past the motorway barriers that have created territorial tension in the city for decades. 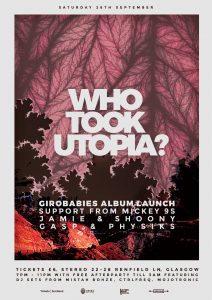 But revolutions are not accomplished so softly.

On the night of the referendum, I was on my way to Jamfest, an open mic night run by Mark that offers the stage to new and established artists in the poetry, music and hip hop scene in Scotland. My first performance had been there earlier in the year. I was on my way to get on stage again.

I never made it that night.

Glasgow had worked itself into a frenzy. An impromptu party was settling in George Square (‘Independence Square by tomorrow!’), cars streamed their Saltires from their windows like a Tartan Army without the ball. Fear, for the very first time in the campaign of ‘scaremongering’ had suddenly gripped me.

The violence in that same square the next day was devastating. The city shifted aggressively back into familiar addict behaviour. Confidence lost again.

Nicola Sturgeon has now tentatively set the possibility of another referendum in motion. Yes2 stickers have popped up in the last few weeks around the city.

But let us not get caught up in the excitement just yet.

To keep moving forward as a nation whether independent or as part of a union is to examine ourselves, heal locally and see the bigger picture.

Who Took Utopia? Well, the closing track Escape! Routine! gives us the answer. ‘You took utopia! And you are only me’.

But what the album is trying to tell us is belief in a utopia, a transliteral ‘no place’, can never be taken from us as it can never exist in the first place.

‘There’s no passport for a state of mind’ we’re told before this reveal. Real independence starts with understanding ourselves, as ‘secret animals’ and social addicts.

Album on wide release 28th September. You can pre-order on bandcamp: http://thegirobabies.bandcamp.com

Cee Smith is a poet and historian based in Glasgow. She is next performing at The Stove in Dumfries at Brave New Words on 18th September and supporting Clayton Blizzard at The Old Hairdressers, Glasgow on 24th October.