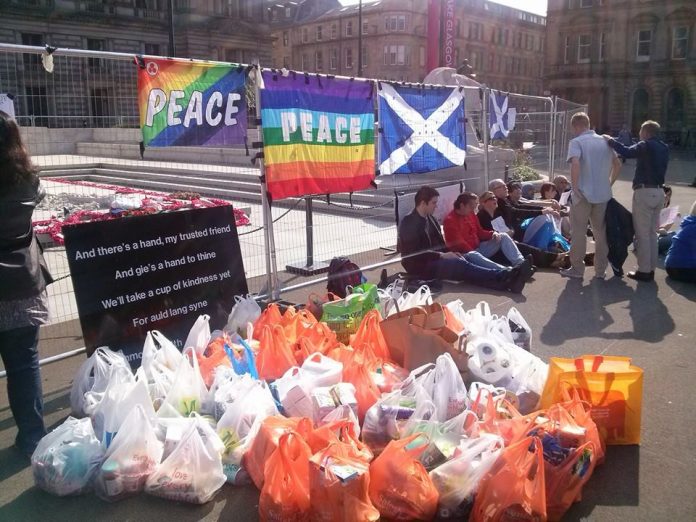 Born and bred in Glasgow, it was useful to know what side my bread was buttered when working for an international video news agency in Berlin.

With the Scottish independence referendum fast approaching, I had pitched at least 10 “visual” and “click bait” stories which could be filmed back home for Ruptly, part of the RT network, and asked the head planning producer if I could leave my usual newsroom position as a broadcast journalist, and cover these stories as a video journalist.

I got the assignment. I would cover Glasgow with another video journalist who would use a drone camera, others would cover Edinburgh, the Borders and Dundee.

As a Scottish expat living for the past two years in Germany, here was a chance to get back on home turf and work in an environment I knew well – a small step away from filming anti-Merkel protests in small German towns.

The brief seemed simple: cover the official events such as the vote counting in Glasgow, people going to the polling stations, the big rallies, and also do the alternative media side-stories I had found back in Berlin through the wonders of social media, word-of-mouth and ultimately, through arm-chair journalistic Internet searching.

The type of news stories I had to cover for indyref were fundamentally based on getting breaking news. Working for a news agency means the premise is always competing to be first with the big guys such as AP and Reuters – along with the more unusual or quirky stories the mainstream news might miss or not cover at all.

My role was to film, produce, edit, script and send back to Berlin 1-1.30 minute TV packages which would be uploaded to our website for clients to buy. Using a sequence of wide, medium and close-up shots, with “controversial” sound bites lasting no more than 20 seconds, here were meant to be the kind of videos you can watch on your mobile phone and understand visually without the sound. Say for instance, you watch one on your iPhone going up on an elevator, and when you hear the lift ‘ping!’ the story has come to its conclusion. You are either none the wiser and have wasted one minute of your life, or you have just witnessed an event or situation in the world which is new to you, without ever having to turn on your TV.

For my first full day in Glasgow, four days before the September 18 historical vote, I covered a satirical comic for sale – “Bravefart” – on Buchanan Street. It had a picture of Alex Salmond as a cult of personality caricature on the front cover. I then covered Citizen Smart’s “Yes” tandem bicycle along with his tartan crew and kilt-wearing bagpiper (yes, I did say the stories had to be visual, and tartan is an image audiences internationally can instantly recognise as being Scottish).

Before I started filming the campaigners’ sporty style of yes campaigning, “Citizen Smart”, a former TV journalist turned full-time musician, referred to me when explaining via a microphone that it was ironic that it had taken a “Russian company” to fly a Scot expat working in Berlin, to cover indyref events that the mainstream news “didn’t bother” to cover. He said that despite BBC Scotland being situated “just up the road” on Pacific Quay, it was “too much effort” for them to send a reporter to the city centre to report on the positive reception to the players of “Yes” songs on their six-person bike.

As the days went on during my indyref coverage for Ruptly, tensions heightened between some folk in Glasgow, namely between some yes voters and some unionists. Twice I covered stand-offs which erupted between the two sides – a polarity which works well for a news agency – and could see clearly with my own eyes the unionists were deliberately trying to provoke the Yes supporters, with both sides kept apart by police.

A source, who is in his 40s and voted for the very first time in his entire life in the independence referendum, alleged the unionists had brought up friends from down south to aggravate Yes supporters in George Square. I believed him. When I saw during a standoff on George Square a unionist do a Roman salute, which to many means a loud-and-proud fascist gesture, I felt alarmed and disgusted, but kept my cool and filmed it anyway.

I will never forget the raw beauty of those spontaneous Yes rallies held in George Square. Tens of hundreds of Scots singing Flower of Scotland, with smiles on their faces, faith in their hearts and hope in their St Andrew’s and Catalonia flags. I climbed the wall atop one of the square’s statues to get some bird’s eye shots of the crowds, and to my left a stranger began talking to me. He must have been in his 50s.

He said to me with his Weegie accent: “I huv never seen anything like this in ma life.” Being in my 30s, neither had I. If journalists are supposed to see all sides of the story, well yes, I completely agree, but as a person I thought that for too long Scotland had yet to write its very own story, because it was in the hands of an elite establishment in London. The atmosphere of those rallies was starting to have a profound effect on me – I already had wanted independence, but now I really started to believe it might happen.

One early morning, a colleague and I each spent over an hour on the phone trying to find the location of the private rally for the No Thanks campaign being held in Glasgow. I’ve had experiences in the past where PR agents are suspicious of a journalist’s intentions, it goes with the territory, but when the people down the other side of the phone are mere political party volunteers, blatantly lying to a journalist when they say they don’t know where the rally is being held and slam the phone down, this was nothing short of plain hostility.

The pressure was on me big-time to get the location of that rally and film Gordon Brown, who was rumoured to be attending. Through an online request I made to a random person on Twitter, who had posted a picture showing inside of the venue in question, I found out where the rally was being held and got there quick-time in a cab, blagging my way in.

The “rally” was more like a performance. Theatrical and every line on cue. It seemed staged and fake. Perfect for BBC UK news at 6, or 6.30pm in Scotland that night. They all played their parts well, especially the newly-wed woman who talked about the NHS saving her entire family, and all because of Labour. I acted on instinct and decided to doorstep Brown and Alistair Darling outside, and luckily for me sniffing out a story, there was a woman passing by who screamed at Darling about poverty, about the rich getting richer, while the poor get poorer, which of course he ignored. As he did with me when I asked him if he was going to speak to yes campaigners on the streets of Glasgow. Then when some jolly Yes campaigners popped up from nowhere to wave their balloons next to the “Love Scotland Vote No” placards, the animosity from the No Thanks side was really quite something: It had ruin their official PR stunt, after all.

Those days are past now

The indyref stories which Ruptly clients liked the most, were two I had actually pitched. The first, a tattoo parlour in Fife (which my fellow colleague had also pitched – great minds think alike), was selling “Yes” tattoos for as little as £1. The Daily Mail bought that video.

The second, my story on Lady Alba – a Scottish version of Katy Perry – who sang songs mocking the Better Together and No Thanks politicians/ pundits. The Daily Mail also bought that one. As for the rest of the videos, I have no idea how they did for profit, and to be honest, I don’t really care, as journalism is not just about money, it is about information.

The point is, Russia Today used a lot of the footage I filmed. People on the street in Glasgow had asked me who I working for and when I said Ruptly they had never heard of, but they knew about RT, and they respected RT: It was RT, and not BBC, they said, which was giving a “bigger picture” of the indyref. If RT’s intentions were to show Scotland can be without NATO, then I am all for it.

At the end of the day, we need new voices in Scottish media, which do not demonise any civilians because of what parties were available to them to vote for, or put fear into people about their pensions and their children’s children’s futures. We need to keep tabs on writing our own history. And what better place to start  than now ?