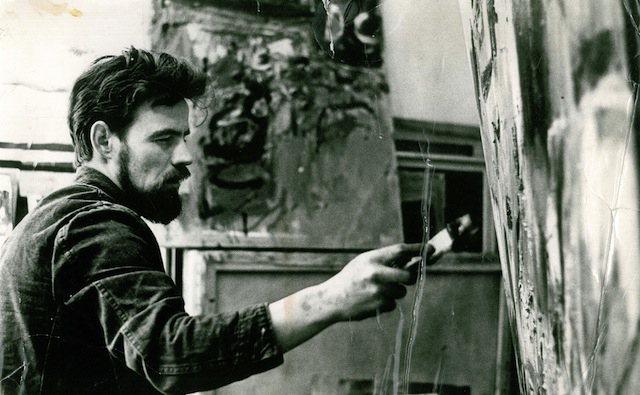 The work of the great Scottish painter George Devlin, is being remembered in a special exhibition at the Scottish Gallery in Edinburgh just 18 months after his death from cancer.

Devlin’s widow, Marie, and the noted arts journalist Jan Patience visited our studio to discuss the artist’s life shortly after the launch of the memorial exhibition last week.

Marie described her late husband as “a man for all seasons” who lived to paint, and worked almost to the point of his death in May 2014. She found that his work became bolder, more colourful and intense after his initial diagnosis of cancer 12 years before his death.

His work even appeared on a set of stamps produced by the French Post Office in honour of his long association with the Val d’Oise region of France.

Jan Patience, arts journalist, knew Devlin’s work best for his Impressionistic style of the last 20-25 years. He brought his own Glasgow School approach to his work. He had an “internal Photoshop”, believes Jan.

Devlin, who died at the age of 75, was born in Springburn, Glasgow. During a lengthy painting career stretching back to the early 1960s he worked in France as well as Scotland. He is noted for his portraits and his vividly coloured impressionist work.

Marie explained: “George was a compulsive mark-maker. He had to paint. Just two weeks before he died he was painting and planning his next exhibition. There’s a lot of blank canvases still in his studio all primed and ready to go. He was an eternal optimist.

“Selecting the work to go on show at The Scottish Gallery was a labour of love. I’ve enjoyed picking out work which comes from the many and various stages in a 50-year-long career as an artist and teacher. When someone with the energy and life-force of George leaves the world, there is a big gap.

“I just want people to see what a wonderful and special artist he was.”

His work even appeared on a set of stamps produced by the French Post Office in honour of his long association with the Val d’Oise region of France.

The Scottish Gallery’s director Guy Peploe says: “Devlin always looked outward, not inward and this is reflected in his many painting trips and exhibitions round the world, to Indonesia, Japan, Hong Kong, India and South Africa.

“He had the energy of a man half his age and an ability to take any adversity life may throw in his path and chop it into manageable bits, to be burned in the steam engine which drove him on.

Marie and Jan’s chat with presenter Derek Bateman makes for a fascinating listen – just click the audio file above. Some of George Devlin’s work can be viewed below. 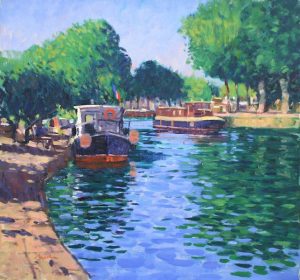