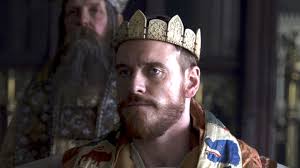 I was invited to see Macbeth in the cinema a few months back. I felt I had seen enough variations of Macbeth to skip this latest offering from Australian director Justin Kurzel. I am very glad I changed my mind.

Mainstream art has always played its part in helping guide a community through grief; from the iconography and ritual of religion to the cinema and the sports stadium, we have been encouraged to experience emotion en masse.

With an abundance of media available to us on TV and online, the community aspect has decreased while the quantity of grief has exploded. The cues to grieve have shifted. We haven’t the time or the space to do so and it is spilling out of us. Choosing addictive substances and behaviours to mask the pain; from social media, caffeine, sugar to cocaine, tobacco and heroin.

We either ignore grief and pretend it’s not happening or we seek it out like an addict of misery.

I wasn’t just put off by dull, high school readings of Shakespeare, I was reluctant to be miserable. In the opening scene, Macbeth and his wife bury their son. He is haunted by the face of a young boy he fights alongside in a later battle. She turns desperately to the cold, dark of the church. He to despair, clinging wildly to both his wife and the stark and harsh landscape around him. In their grief she lays the idea of murder in his hands which ultimately leads them to the light and beauty of a castle. Power. Money. Ultimately the greatest distraction and comfort available in the period.

This was a film that felt Scottish. With the lead actors French and German-Irish, an Australian director and a script written by a 16th century Englishman, that might sound like an odd statement. Or the fact that ‘the Scottish play’ should in fact feel Scottish may sound like a redundant statement.

But it was the first time Macbeth felt to me a relatable countryman. Seeing our national landscape, hearing our own accents (from the other players of course, though Fassbinder did provide a passable if Glaswegian accent). The words did not matter.

Gone was the needling conniving Lady and the cold, cruel  Macbeth. Left were two scared and confused parents pushing themselves towards action for the sake of action to a climax where Macbeth finally sees the futility in reacting to violent loss with more violence.

It was all the more relatable. It was recognisable in the streets where our own grief compels us to act destructively. To embrace our addictions because it ‘cannae get any worse’.

Those were the words overheard by a friend coming out of the referendum polling station after his constituency voted yes for change. The grief of the referendum hit the Yes movement hard. The failure of the promises made has provoked anger and grief from some who voted No.

It was even a running theme of the referendum. Grief of losing both independence and union. It was a mass political cue to experience all of our losses and suddenly it was pushed to the background. Conversations were started but never finished. There were no other options. Yes or No. Grieve or Ignore.

Something needs to change. Perhaps if we learn to recognise grief and its symptoms we can move forward.

Essay: What can we learn from the French about attitudes to...