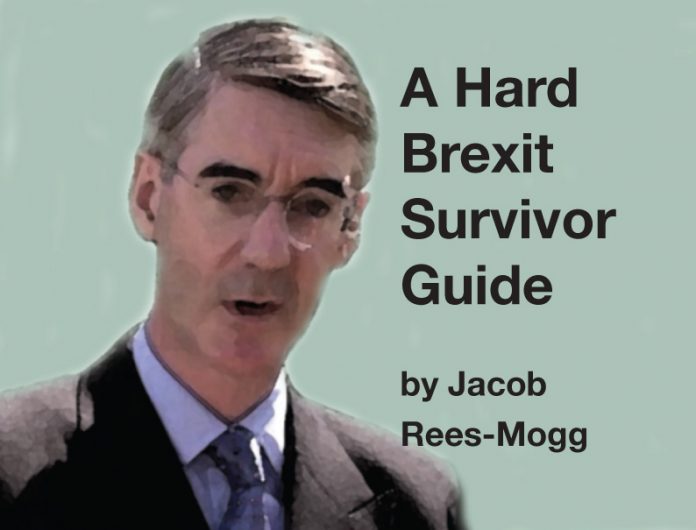 Cruella De Ville lookee-likee, Theresa May, and the current Rover Assortment of biscuit-brained guddle-merchants in her imploding cabinet have decided to usher in a Brexit harder than Reggie Kray on Viagra. We’ve never had it so bad. And it’s about to get worse.

With the Brexit hare finally off and running, whippet-in-chief of the right-wing, Jacob Rees-Mogg, slavering with delight at the news, was first out of the traps. ‘The totally bonkers booze-hound bully boys of Bruge are going to get the bunch of fives they bloody well deserve,’ the Moggie sneered — his monocle, momentarily powered out of its eye socket by sheer joy, ricocheting off his diamond jubilee mug like the lid of a Cheese and Onion flavoured Pringles’ tube which has been stamped on by a squaddie in combat boots.

‘I’m going to issue a public information booklet to every household in the realm, entitled Mitigate with Mogg: The Hard Brexit Survivor Guide’.

Newsnet can exclusively reveal that a copy of this document has been leaked to Citizen Cuddis, who shares extracts with us here.

‘Let’s keep calm and Brexit in an orderly fashion. Don’t run. And close all doors after you, because the Britain you leave behind won’t be available in the shops (there won’t be any shops) when you emerge from your Brexit bunkers.’

‘A stiff upper chamber and a zinc bucket brimming with blitz spirit should see us through any early social turbulence. The blitz of course was a time when the man in the chip-shop queue sang Vera Lynn songs in London underground stations where he slept shoulder to shoulder (and sometimes, if it was busy, on top of, hundreds of strangers. Each morning he’d wake up in a cold sweat, wondering whether his house had been vaporised by a doodlebug or his wallet had been half-inched by a dodgy bedfellow while he slept. We’ll need this sort of character forming test of our mettle in the days to come.’

When’s the kick off?

‘At precisely 11.00 a.m. on 29th March, 2019 and largely for nostalgic reasons a WWII air raid siren will sound. Tory voters should head for their designated shelters. Members of other parties — especially separatist maniacs from the SNP — should pile into the glory hole under their stairs. From this point forward the authorities have been instructed to give up caring about you altogether.

We realise that you didn’t vote for this; nobody did, but it’s too late to whine about that now. Leave that to the remoaners. You may be concerned about your job too. If you previously worked in the car industry or finance, for example, you’d be right to. Our advice is, don’t bother going to work; your job will have moved to Dublin.

When will things go back to normal?

Ha ha! Very good. After Brexit there’ll be no ‘normal’. Me and my chums will still of course be privileged, rich and powerful, whatever happens. You’ll have to settle for ‘different’ in place of ‘normal’. Will the new ‘different’ be as good as the old ‘normal’? Highly unlikely, but just believe in your country, like Boris, and you’ll emerge to a land greener and more pleasant than you ever imagined.

How will we know when to come out from under the stairs?

We’ll sound the all clear. This will be the full version of Elgar’s Pomp and Circumstance. If you don’t know the tune, then you’re not worth saving anyway. You’ll emerge to find an invigorated and much improved Great Britain in which my party will be seeking trade deals galore with far-flung places. Granted, these are the same far-flung places we robbed blind in 1850 so don’t expect too much, too soon. We may have to lie to them the same way we have been lying to you for the last two years.

Will I contract the galloping mange?

While we’re ironing out the teething problems on our Brexit snagging list you may have to live with personal hygiene levels similar to those suffered by peasants in the 14th century and without access to medical practitioners. Though this should only only be for the first 50 years. It is indeed possible that you’ll catch the galloping mange off your pug, or that you’ll have a tertiary rickets and rampant scurvy combo beyond the healing power of all known antibiotics.

The thing is that the NHS will have been sold to US corporate sharks while you weren’t looking. Until they sort out how to compel everyone to take out private medical insurance, there’ll be nobody available to manage your mange. Just be comforted that in the new NHS everyone will be routinely hosed down with chlorine, free at the point of need.

There’ll be good news on taking back control of our coastal waters too. All haddock in the North Sea will have signed an oath of allegiance to get caught only in British nets and to commit suicide if captured by Spanish trawlers.

There’ll be time for celebration too. To show off our nascent trade links with the world beyond the EU — a world for 40 years denied us by Brussel-cratic Bureau-krauts — we plan to stage a latter day Great Exhibition like the bash Queen Victoria threw in 1851, only this time it’ll be held in a lean-to Everest Double Glazing mini-conservatory on an industrial estate outside Chipping Sodbury.

In summary, there’s much to look forward to (for me and my pals anyway). In the meantime here’s some assorted tips on how to mitigate your brief and possibly uncomfortable spell in the Brexit bunker.

If you’re a Scottish No Voter, whitewash your street-facing windows so nobody can see your shame for not choosing to flee this man-made midden when you had the chance in the 2014 independence referendum.

A dozen should do. They’re not for blast protection — Brexit Britain will go down with a whimper, not a bang — it’s just that you may have to eat sand until new food supply chains are set up. You might find ‘Cooking with Sand’ by Iain Duncan Smith (Penguin Modern Classics) useful here. It was originally aimed at Universal Credit applicants but is packed with many Brexit-relevant recipes.

Take two if you can, one for each hand. The kind you stab into the lid before sawing your way round the rim of the tin. You’ll need these to defend yourself against former neighbours who couldn’t be arsed stockpiling tinned meatballs because they thought Brexit would never happen, but who now want to steal the food out of your mouth in a post-apocalyptic fury.

Don’t come out until the BBC has filled your head with mince and you’ve got the message that  any difficulties lie squarely at the feet of Nicola Sturgeon. To soothe the populace, cars with loudhailers will roam the streets 24/7, blaring out the message, ’Well, the alternative was having Jeremy Corbyn in number 10’.

You’ll need a slack handful of these for reaping the Brexit dividend in Theresa May’s nostalgic wheat fields, once you come out of hiding. It is not expected to be a bumper crop this year. 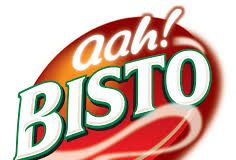