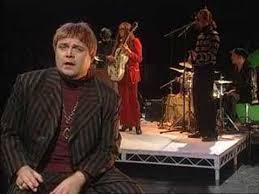 Word on the street is that Spud Murphy is so desperate to find cannon fodder for his latest military campaign against the SNP that he has recently formed a Jazz combo in the hope of capturing the beatnik vote in time for GE 2015.

Since the last beatnik standing dropped his remaining tanner in the jukebox sometime around the spring of 1958, this idea should always have been a dead man walking. Nevertheless, sources close to the Scottish Jazz scene confirm what NewsNet.scot’s black ops reporter discovered: That Moon-Dog Murphy and his band actually played an unscheduled set at Coos In the Park last year.

Documents held by Citizen Cuddis’ lawyer reveal how critics were bitterly divided over Moon-Dog’s performance. We are today publishing two reviews, each of which tries to settle the question—Moon-Dog Murphy, musical legend or political shyster on the highway to Hee-Haw Junction?

Moon-Dog Murphy and the Dugdale Quartet headline at Coos in the Park as Niddrie hosts Doric Jazz Festival
By Demi ‘Semi-Quaver’ Johnstone, editor of The Doric Jazz Quarterly (and best-selling author of The Well-Chilled Teuchter.)

When I heard that Moon-Dog Murphy and the Dugdale Quartet were gigging at Coos in the Park a vibe in this old jazz critic’s bones told me that something crazy was about to go down in Niddrie. And was I right Daddy-O? Or was I right?

I’ve been Moon-Dog’s biggest fan since I first saw him perform during his university days. Of course, he had plenty time to rehearse back then; nine years in all. Granted, nobody asked him to play that night, but Moon-Dog managed to knock off ‘In the Midden of the Night’ — an homage to Billy Joel — before the bouncers got him in a half-Nelson and huckled him out the fire doors into the car park.’

‘I secured a front row ticket through eBay’s unwanted gifts section and headed for the venue in my Volkswagen Beetle. I was not disappointed. The band’s line up was brand new: Moon-Dog on liquorice stick, ‘Dugs’ Dugdale on slide trombone, ‘Mags Curran on expenses and ‘Wacky’ Jackie Baillie on Stylophone and Flugelbunt.

Moon-Dog’s fusion of Scottish dance band music and Sixties jazz really razzed my berries, producing a set that was as finely demarcated as Lord Snooty’s centre parting. The set was an intoxicating blend of old and new. They kicked off with the classic Fa cut yer hair and cried ye baldy?, ending with the title track from their forthcoming album We’re a’ up the Wrang Dreel Noo!

There were mistakes. Sure. Twenty four bars into The Muckin’ o’ Geordie’s Byre and half way through his seventh reefer of the day, session musician ‘Toots’ McTernan realised that the double bass he thought he had been playing for over two hours was still in the van.

A mistake, yes. But what a recovery. Despite suffering from immense stupefaction brought on by prodigious amounts of cannabis resin, Toots improvised the piece’s syncopated thirteen minute double bass solo on Spud Murphy’s galluses. Haste ye back, Moon-Dog, I can’t wait for your next gig.

Bad tunes a-go-go as Moon-Dog Murphy and the Dugdale Quartet bomb at Niddrie
By ‘Bongo’ Bill Mackenzie, author of A Thon Jazz, A History of Twentieth Century Doric Jazz

Legendary female jazz pianist, Effie Sharp-Minor was this morning treated for shock at Glasgow Royal Infirmary following the pre-meditated murder of her Doric-Jazz classic,Tatty Fritter, at the hands of jazz fraudsters Moon-Dog Murphy and the musically sub-standard Dugdale Quartet.

Moon-Dog’s cloth-eared ensemble somehow conspired to make this legendary track sound like a badly tuned harpsichord crashing down a spiral staircase during an air raid. Scene of the crime—main stage, Coos in the Park, Niddrie. Time of death — eight p.m.

Bad jazz stands out like a stockbroker wearing Nicky tams. And make no bones about it, buddy, this jazz was yodelling.

To call this number lacklustre would be to greatly overplay the vibrancy of the piece.
During what promised to be a poignant rendering of Lady Lammermuir’s Teats, Dugs abruptly stopped mid-honk to spray WD40 on her trombone slide. Having started badly Moon-Dog and his band were now falling away.

Overall this was a peely-wally performance by peely-wally politicians masquerading as peel-wally musicians. The flimsy canoe of their namby-pamby musical and political posturing is about to be smashed to matchwood on the concealed rocks of voter disillusionment in the white water rapids of the upcoming General Election. As Ray Charles might have said had he hailed from Niddrie, ‘Hit the road Spud. And dinnae come back.’

Normal service will be resumed sooner or later. Ed