It was in some senses the “nearly” revolution, that spring and summer of 2014 when the joyous, optimistic roar of a youthful Yes campaign threatened to undermine received wisdom and push Scotland down the path to independence.

Rarely, and perhaps too briefly, this campaign was torn from the grip of the politicians, spin doctors and media pundits. All were usurped by a movement which was driven by idealism, sometimes by naivety, and often just loads of raw energy. 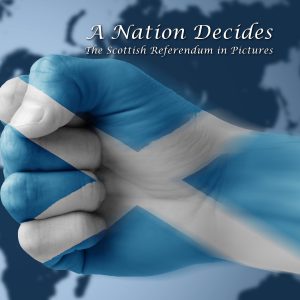 Suddenly the old order became more than a little uneasy. The Scots couldn’t actually break away, could they ? Would they ? Cameron and Miliband abandoned Prime Minister’s Questions and headed north to cajole, appease and – just as probably – bewilder as many Scots as possible, just 10 days before the poll. The episode will be remembered  as an unmatched political panic. And of course, there came “The Vow”.

That drift into chaos, when politicians suddenly felt their feet soaked by the Better Together boat springing a leak, won’t be forgotten quickly by either side of the debate. Raw politics almost overturned that boat and dumped Unionist certainties into the water.

In some ways, the Yes campaign enjoyed a taste of the euphoria that was to be witnessed later in Greece with the election of an anti-austerity coalition. Scots who had never been involved in politics, and especially young Scots who may not have voted before, were high on hope last summer.

A Nation Decides captures that moment in time very aptly. This is no coffee-table book of glossy pictures, but it is a remarkable little compendium of memorabilia from the trenches of the Yes campaign.

There are few politicians in the book, save a couple of photos of Alex Salmond and Nicola Sturgeon at rallies, signing autographs, posing for selfies. The bulk of the book is in fact a collection of photos, poems, songs, spoofs and campaign materials with a strong “home made” flavour, drawn from the collections of everyday activists as they reflected on the highs and lows, and the ultimate defeat of the campaign last September.

Some of the photos aren’t perfectly composed or focused, some of the digs at Better Together less than subtle, but the overwhelming flavour of the book is its enthusiasm and raw emotion. At times naive, but always warm. It resembles one big Facebook page set to print, alternating between the ultra-serious moments of an intense political campaign and those tender moments where parents devote their political ambitions to their own small children.

The No vote was followed – quite unpredictably – by a massive swelling of membership for the Yes parties, and particularly the SNP. It remains to be seen just how much this will impact on May’s UK general election, and the Scottish poll a year later. But indeed there will be impact.

We are left wondering how the raw energy and enthusiasm that sucked so many people into political activism will manifest itself over the years ahead. Will it dissipate, or might it be applied to changing Scotland even within the status quo of the UK ?

The disappointments of 2014, the disillusionment of “The Vow” and meaninglessness of the Smith Commission will dampen some people’s enthusiasm. But, regardless of party, allegiance or how any of us  voted last September, there are things that can be done to make Scotland a better place, right now.

Meanwhile, A Nation Decides serves as a worthy reminder of a campaign that supped on hope and – judging by the extraordinary reactions of Westminster immediately pre-vote – came close to changing the UK forever. Who knows what might happen next ?

A question of morals for the ‘golden oldies’ of Project Fear