Scottish film-maker and journalist Bill Boyes has been working as a volunteer with people escaping war and poverty in the Middle East. He brings this special report from Europe’s refugee front line, the Greek islands.

Nineteen year- old Mohammed was pretty clear: “I want to go back to Syria. At least there I will die quickly. Here I am dying slowly.” He and his family have been in the Greek asylum  system for four months and they are beginning to lose hope.

Since the EU-Turkey deal was signed in March, Greece has stopped being a transit country and become host to tens of thousands of migrants from not just Syria, but all over the world. This is putting unbelievable pressure on a country already struggling with economic meltdown.

Aegean Islands like Kos and Lesvos have been particularly hard hit. The numbers might have gone down – at its height thousands of people were arriving on the island each day – but now those that make it ashore are staying put, not moving on the mainland. The result is there are now over 13,000 migrants on Lesvos alone. 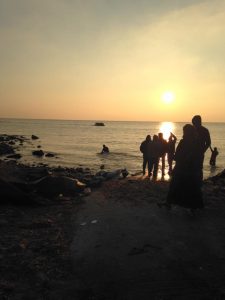 Maheer Rashid is one of them. He fled home in Damascus last November. He had a good life there – he worked with his father in the family store. But as the war against the rebels escalated the Government became more aggressive in conscripting young men into the army, particularly if they came from a Sunni district like his.

“Every morning when I left for work I would kiss my daughter Lulu goodbye, never knowing if I would see her again. Checkpoints were everywhere. If your name was on the list you were taken straight to a bus. A week later you would be on the frontline fighting Daesh (IS)”

Time was running out for him, as one by one his friends disappeared. In November he, his wife Fatima and their two-year old daughter Lulu packed up their belongings and headed for Turkey.

He tried to make a go of it there, but found it hard to get work and pay the crippling rents charged by local  Turks.

In March Maheer sold or gave away all his possessions and raised the $600 per head to make the four mile boat trip to Lesvos. It was a dangerous trip, but they felt they had to take the chance if there was to be any hope for their daughter’s future.

Their journey ended in rescue by the Greek coastguard.

Relieved to have survived, the family were sent to Moria Reception Centre, a former military detention centre  on Lesvos and now a designated “hotspot” where migrants are registered and processed. Four thousand migrants are crammed in behind barbed wire and fences.

During that time he feared for his wife and daughter. There was a high proportion of single men in the camp and violence and drunkenness was common. On the day we talked, the tension in Moria boiled over and Greek police had to quell a riot which destroyed a large part of the temporary housing at the camp.

After 45 days they were moved to a more family-friendly camp, now home to a thousand other migrants, near the Lesvos capital Mytileni.

Conditions here might be better but there is no escaping the feeling that they have been “parked”. Maheer has been on Lesvos for six months. “There is nothing to do. I’m not allowed to work or contribute anything. I want to work, to provide for my family.”

In most of the camps the migrants aren’t even allowed to cook for themselves.

Despite the fact the EU is now pouring millions of Euros into Greece, the processing of migrants like Maher is painfully slow. With 60,000 migrants in the country, the Greek Asylum Service has been overwhelmed. They don’t have the caseworkers to manage the numbers.

And it’s not just the migrants that are suffering from this lack of movement.

On the north coast of Lesvos, the part closest to Turkey is the upmarket tourist town of Molyvos. In the summer and autumn of 2015 Molyvos made the news, as local people and other volunteers bore the brunt of the wave of migrants making the crossing. Thousands were arriving every day.

Melinda McRostie, who runs a local restaurant, set up a feeding station behind her hotel. A transit camp grew up in the car park of a local night club funded by donations and manned by volunteers and local people. It was months before the big NGOs arrived to help.

The people of Lesvos were nominated for a Nobel prize this year because of their efforts.

There’s no visible sign of that mass influx of migrants now at Molyvos, the beaches no longer littered with orange life jackets. But it has left its mark.

Melinda McRostie and the Starfish Foundation she helped set up  spend as much of their time caring for the locals who have lost their livelihoods because of the impact on tourism in the area.

“After seeing the photographs in the news the tourists have stopped coming. Now many of the locals are out of work, the hotels empty,” she says.

Political tensions on the island are running high, with both left and right wing groups seeking to exploit the situation, many of them coming from outside Lesvos. The reality is that migrants are not being moved on fast enough.

The EU collectively undertook to take 66,400 people from Greece. By the end of September just five per cent  of that number had been fulfilled. More people are still arriving.

On one thing both Melinda and Maheer agree. They are both living in limbo. The lack of a focused coordinated response has left them both facing an uncertain future.