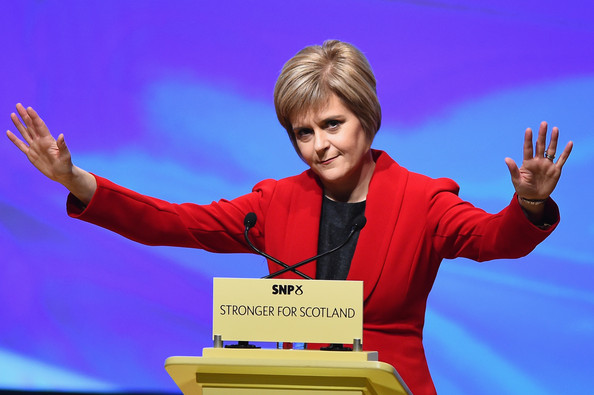 I have a good friend. Let’s call her Claire. We met in 2014. Our values and political opinions are pretty similar, though she was as stridently ‘No’ as I was ‘Yes’. She called me on the morning of 19th September. Though she’d never admit it, I sensed she too felt deflated.

“You never know,” she said, “In five or so years, I might vote yes too.” I was too upset to respond and admittedly felt there was little point now the vote had passed. But I wondered – what did she want or expect the next five years to change?

It’s all a matter of time. This is what we hear, time and again. The date of Indy Ref 2 has to be perfectly timed. Independence is a question of time. Now is not the time. The problem with time though, is eventually it runs out. At that point, you either completed the task or you didn’t.

For generations, students entering exams have been given the same advice. Use the time available. Don’t waste the first half an hour planning your approach. Don’t give up with half an hour to go. The same advice applies to the Yes movement today and the clock is already ticking.

Supporters of independence have waited long enough.  Post 2014, we confidently waited for the shit of a ‘No’ vote to hit the fan. Then we watched as that shit repeatedly hit the fan, through EVEL, the trappings of the Smith Commission, HMRC job losses, disappearing frigates, reduced budgets, increased austerity and ultimately Brexit. Then we wondered how much shit needs to hit the fan before those who placed their no vote in good faith start to question the competency of our masters in Westminster?

Yet still we see passivity in response. The no vote hasn’t significantly shifted. There might be a general acceptance that Brexit spells disaster, but this hasn’t naturally evolved into the groundswell for independence which many expected. And why should it when there is not yet an alternative on the scale we saw in 2014 to gravitate towards? I think now of Claire. Three years have passed and she’d still vote no. But what really have we done in that time to convince her otherwise? Yes there has been a lot of hard work behind the scenes, but for those don’t watch political programmes or read a daily blog – what messages have they received?

How many times have you heard agnostic voters say they’re sympathetic to the notion of independence, but don’t want another referendum? Now is the time to challenge this reprise before it becomes established rhetoric. Accepting it only indulges the passivity and delays progress.

Of course there’s a lot of fatigue. There’s voter fatigue after annual elections and referenda. There’s understandable activist fatigue after repeated campaigns into which foot soldiers across the country invested their heart and souls.

There’s also a legitimate fear of burnout. I used to think there was little point in campaigning without a date on which to focus. I even feared it might cost momentum. But isn’t that approaching the situation back to front?

As such, a key aspect of the revisited campaign must be to distinguish Scottish independence from Brexit. To illuminate independence as a solution, rather than an additional problem. Whether we like it or not, Joe Public – who might not be up to date with the devolution settlement, or who is perhaps a little rusty on the specifics of the EU Withdrawal Bill –  may view these vastly different situations as two sides of the same coin. Allowing one to run its potentially catastrophic course, risks making him less sympathetic to the other and the mortal danger of this to Scotland’s chance of independence must be recognised – before it’s too late.

Yes there was a valid argument to say we should wait to see what the terms of Brexit are before re-launching an official campaign or declaring Indy Ref 2. But clarification on the final terms of Brexit could drag on for an undefined ‘transition’ period and then the case for Scottish independence risks being postponed until ten past never. Will Theresa May’s decision to enshrine the date in law change that? Probably not. Alternatively, Brexit could take us by surprise with a deal which falls through at the eleventh hour and pulls us into the abyss of a cliff edge scenario. At that point, it’s too late to start talking about the escape route we might have had. We’ll be lost in the chaos and so will the last chance for an independent Scotland. It’s not an inevitability, it’s an opportunity that’s running out of time.

Of course the premise of said caution is to wait until conditions are more certain, so that voters are provided with a clear choice. That is the ideal scenario. Back in real life, that certainty may never appear. Perhaps we should instead remind the electorate that nothing is certain and we must have the maturity to recognise that this is fundamentally a more simple choice than many imagine: Do we want to face inevitable uncertainty with the tools to make decisions for ourselves? Or do we want the terms of an uncertain future to be decided by somebody else? A distant Parliament that time and again, has treated our people, our votes and our resources with contempt? A Government that time and again, puts party interests before those of our nation?

In 2014 we allowed the unionist establishment to dictate the terms of debate. We spent much of our time defending the arguments for independence, rather than attacking claims made for the union. Then we lost. By waiting for Brexit to play out, we’re falling into the same trap. We’re allowing Westminster to dictate the terms and implicitly agreeing that “Now is not the time.”

Now strikes me as the perfect time. If the Yes Movement resurges as the Brexit crises develops, Westminster is left unable to cope with a battle on two fronts. We have a choice. We can build our campaign now while another situation is demanding attention and resources– or we can go home and continue to eat our cereal.

One side is facing at a time-bomb. Come Brexit day, either the union, or the independence movement will be seriously wounded by the shrapnel of missed opportunities and time wasted. At that point, the prospect of recovery becomes much more difficult.

Of course it’s easy for all of us to sit in front of a screen and pontificate. But what does it mean in reality? Where do we start? What can we as individuals do? In short, whatever you can, but I suggest we invoke the strategy of ‘One at a Time’. We all know a Claire. We all know one person, who should have been a yes voter in 2014. Someone whose ideology was far more in keeping with the pro-independence camp than Better Together, but who for whatever reason, didn’t quite make the leap. This might be a pal, a colleague, your hairdresser or postie; and you are best placed to know the approach most likely to convince them. If we all convinced the Claire in our life through a bespoke strategy then the union, not independence, is living on borrowed time.

It’s time Scotland took inspiration from Catalonia and grew a set of cojones. Of course they could have waited until the constitution was amended, or a legal referendum agreed, but in reality that was never going to happen. So they demanded progress. They demanded recognition of their rights. They threw caution to the wind and enacted what the people had voter for. Across the nation there were countless examples of extreme personal bravery as individuals ventured to the polls in spite of state authorised violence and police brutality.

In Scotland the situation is in many ways is simpler. So what are we waiting for?

A Beginner’s Guide to Scottish Independence and Britain