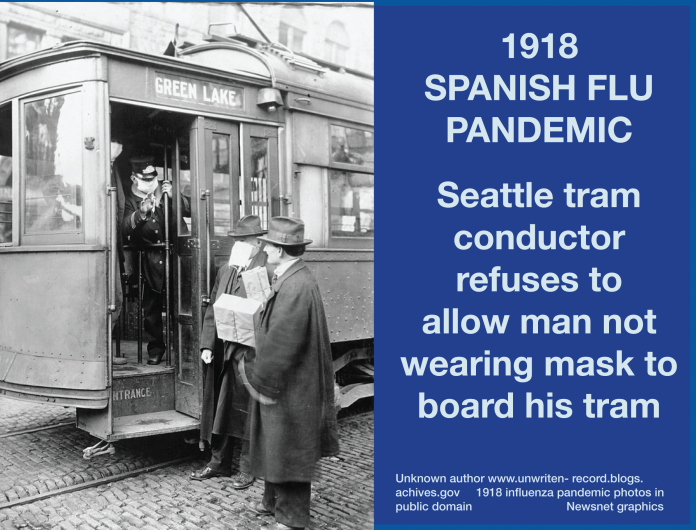 29th April marked 100 days of WHO (World Health Organisation) daily reports on Covid-19. This is the first major epidemic to hit Europe and the US to such an extent since the 1918 Spanish flu epidemic. Masks were an established part of the response then and Scotland is now on that journey today.

Nicola Sturgeon’s recommendation to cover up when in public has gone down well with those who understand the continuing dangers of infectivity transmission. Trisha Greenhalgh, Professor of Primary Care at the University of Oxford was quite clear #bbcgms when she said “lives would be saved in Scotland.”

Anything that reduces transmission levels is to be welcomed. Barely 1% of the population of Scotland has been tested and we know testing is not 100% accurate when doctors have sometimes requested a second test for those clearly showing Covid-19 symptoms.

There is nothing new about the wearing of masks during an epidemic as the images from the 1918 Spanish flu epidemic show. Social distancing and isolation (non voluntary) goes back to the middle ages at the time of plagues. The significant differences between Covid outcomes in Northern Italy is largely connected to how the situation was managed in Lombardy where the death rate is much higher compared to neighbouring Veneto.

Venice is the capital of this northern Italian region and for 1000 years Veneto was part of the powerful Venetian Republic. During the 17th and 18th centuries Venetians understood the infectious nature of plague epidemics, using an information network across the parts of the Mediterranean it controlled to stop movement from plague invested areas with immediate isolation. Turning up in a boat at Venice and landing was not an option, unlike UK border control absence at Heathrow. Veneto has the kind of history that can perhaps still linger in the mind of authorities facing a 21st century pandemic. More on Italian differences later.

In 2005 scientists at the Centres for Disease Control and Prevention (US) reconstructed the 1918 Pandemic Influenza Virus. The reason for its recreation was to enable identification of the characteristics that made this organism such a deadly pathogen and thus aid researchers develop new vaccines and treatments for future pandemic influenza viruses

With science and immunisation we have eradicated many deadly diseases over the centuries. The smallpox vaccine was first produced towards the end of the 18th century by Edward Jenner. Most of us (adults) were vaccinated against tuberculosis, yet this is still a major killer in many parts of the world. WHO recently reported that 4000 people worldwide die a day from TB.

The UK government decided they would deal with all purchases of PPE and that has verged on the farcical. Anxious to show things happening, announcements of purchases are made in advance of what turns out to be late deliveries for less than expected. Nicola Sturgeon has made a point of announcing the arrival of PPE supplies for Scotland after the actual arrival.

To date, two fights have arrived to Prestwick from China under a complex multi organistion set-up put together by Trade Minister Ivan McKee. “NHS National Procurement supported by a cross-government team led by the Minister for Trade, Investment and Innovation and including the Scottish Government, Scottish Enterprise, NHS Scotland and the National Manufacturing Institute Scotland has helped to secure this equipment from suppliers in China.”

Return of the English sweating sickness?

I am reading The History of Danish Dreams, a novel by Peter Høeg and found these interesting lines “…he and the Princess had not only stayed clear of other people but also outdistanced consumption and cholera and the English sweating sickness and all the other epidemics that ravaged Denmark during the second half of the [nineteenth] century.”

English sweating sickness was a medieval epidemic that swept through England at the time of Henry Tudor’s war against Richard III in 1485. Outbreaks occurred during several summers up until 1551 when it disappeared. It did spread across northern Europe and Denmark was one of the countries affected. The reference in Høeg’s novel is most likely simply a dig at England or an assumption of a ‘normal’ flu epidemic with fever and sweating effects.

Somehow the idea of the English sweating sickness seems to have a modern parallel in regard to much of the Johnson government’s handling of Covid-19 amid constant attempts to sweat some degree of competence in governance. Day by day the failure to capture a real sense of a coherent strategy exhibits a sweating administration more concerned about getting back to polishing Brexit off. Never have we needed Pan-European solidarity and collaboration more to survive this crisis and reconstruct shattered economies. Brexit is the massive unexploded bomb left over from England’s 2016 uncivil war.

The extension of lockdown is certainly very welcome and perhaps much influenced by the damming piece in the Sunday Times. Despite several years of immigrant bashing and a poorly thought out immigration policy that mitigates actual high value arrivals, because they are much needed by the health service and agriculture, the UK has not stopped flights from countries with high infectivity rates. The Sunday Times article identified 190,000 arrivals from Wuhan and other high population density Chinese cities with no checks on arrival.

Why the difference in official response? Not all those arriving are intending to settle here. Some come to study. Universities rake in the fees from Chinese students and others are coming to seek trade arrangements or to use the City of London to offshore their wealth, if not always in the UK, but often in the UK worldwide network of tax havens. As the former Bank of England governor remarked the UK – ie. London – is indebted to the ‘kindness of strangers’ to offset the UK’s trade imbalance. On immigration Whitehall man speaks with forked tongue.

The UK and Scotland also underestimated the possible danger of Covid. Scotland shut down most events fairly quickly but Johnson failed despite widespread opinion that Cheltenham should be cancelled. In catching up with the threat to life, Nicola Sturgeon has certainly pushed the pace for adoption of a safer strategy with a video conference between the devolved nations and now advice to use face coverings. Asian countries are more conditioned to adopting strong measures when faced with a pandemic and the wearing of face masks is widespread in China, Singapore, Taiwan, Japan and South Korea.

In the initial stages it is likely Europeans thought that they would be little affected by Covid-19 and the pattern of infectivity would be more like SARS (Severe Acute Respiratory Syndrome) where the big impact was in China, Hong Kong, Taiwan and Singapore. Altogether there were 8422 SARS cases and 916 deaths worldwide but Europe and the US saw very few cases. The UK recorded 4 SARS cases and no deaths.

Another epidemic that had little impact on Europe was MERS -CoV originating in Saudi Arabia. MERS stands for Middle East Respiratory Syndrome. Europe had a total of just 15 cases but more than a quarter were in the UK. Although less transmissable it was very deadly and there were 7 deaths in Europe – 1 each in Turkey, Greece, France and Germany and 3 (43%) in the UK – perhaps because of the UK’s close connections on defence sales and oil contracts with the Saudi Kingdom.

Northern Italy became the first hot spot for the Covid-19 virus in Europe. The experience of neighbouring regions Lombardy and Veneto show markedly different death rates. Lombardy has an 18.3% fatality rate compared to 6.4% for Veneto and 10.6% for the rest of Italy according to analysis in the Lancet. It was a warning that this one would hit the rest of Europe with fewer doctors per 1000 population in the UK compared to these wealthy Northern Italian regions. Celebrate difference because the Italian experience shows two very different outcomes in adjacent regions.

Scotland to get masked

In a previous article Equality Nation provided information on making masks. Well worth a re-read. Nicola Sturgeon is anxious we take extra precautions to protect us and others. Just using a normal scarf is better than nothing but it should be washed between being out in public places. Better to have a couple of cotton masks and wash each after being in public to maximise transmission limitation. In 1918 the Alberta Health board recommended using 8 by 8 inch cheesecloth folded in half then half again to make a mask for the time. A closely woven cotton mask would be a better solution for Covid-19 today.

We are also beginning to see a small number of people use dust masks. Better than no mask but strictly like any mask a one time use solution. Even being able to obtain the 3 layer non-woven face masks with the aqua impervious non-woven melt blown fabric inner layer (CE Certified Waterproof) these are also for once only use before safe disposal. Governments are anxious that these are mainly available to health workers in hospitals and the care sector. NHS workers can get through several a day moving between wards and patients.

As usual there are some ill considered comments on the First Minister’s recommendation to be covered when out in public. The principle is very simple – covering your mouth protects us all. We are far from knowing the real rate of infectivity. In the early stages the known early symptoms are not always evident. That might be you or the person you pass in a supermarket alley. Better safe than sorry by protecting one another, by taking care of one another.

Come 29th April Scotland again recorded 83 new deaths with the 7 day average standing at 50. By ironing out the fluctuations because of the variability of the timing of death registrations any flattening of the curve is an arguable conclusion and we have yet to see a really satisfactory decline that would justify lifting the lockdown. A modest decline in new daily infections is encouraging but not on a scale that would yet indicate early easing of restrictions is justified.

The use of masks and face coverings is the simple thing that could be the accelerant factor for real decline and all we have to do is cover up to enable that process. Other countries are behind this simple mass exercise as is the World Health Organisation. Ireland is now considering following Sturgeon’s latest initiative.

At UK wide level with England’s care home deaths still not integrated into daily figures, unlike Scotland, there is little difference in the total impact of the virus between the most affected larger European nations, with the exception of Germany. Spain, Italy, France and the UK are all sharing similar levels of Covid-19 impacts with minor trajectory difference.

For international comparisons the FT is making their detailed analysis free to view for non-subscribers. You can use this link and reload the page to get the latest free FT daily report.

The US? Well, that is another chaotic story that trumps all else .

The final text on this memorial is especially apposite in 2020

Particular respect is paid to doctors, nurses and citizen volunteer whose selfless efforts to aid the sick resulted in their own untimely deaths

Mask up and keep safe.

Defence in the spotlight as conference looks at independent Scotland’s armed...