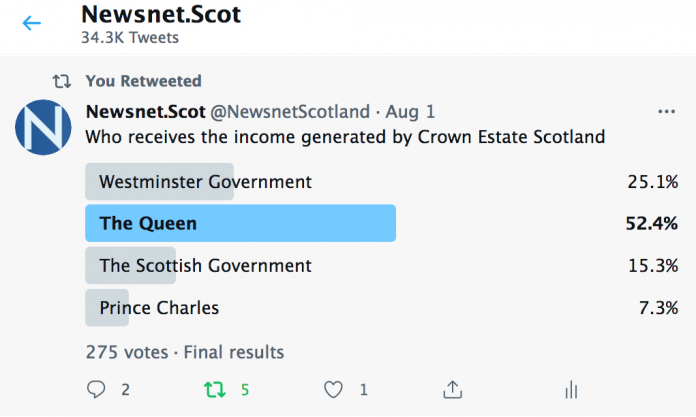 We ran a Twitter poll on who receives the income from Crown Estate Scotland. The outcome is perhaps not surprising given the Queen receives considerable income from the state and has many other income sources including the Duchy of Lancaster that is part of the private estate of the British Sovereign. Balmoral is the personal property of the Queen which we covered as part of the Royal opt out demanded over renewable obligations on landowners.

52.4% thought the income went to the Queen, 25.1% thought it went to the Westminster government, which it did for close to 200 years prior to 2017. The wild card was Prince Charles who got 7.3%. Our congratulations to the 15.3% who picked the right answer.

Note 2f in the accounts states “Crown Estate Scotland is not subject to corporation, income or capital gains tax. The revenue profit is paid to the Scottish Government Consolidated Fund and will be used for the benefit of the taxpayer.”

With the 2017 Crown Estate Transfer scheme the Crown Estate Commissioners transferred the rights and liabilities to Crown Estate Scotland but not everything was passed on. The major source of income at that time (60%) came from a major holding in Fort Kinnaird retail park, south of Edinburgh. The Crown Commissioners held on to this and later sold the stake using the funds to take full ownership of the Gallagher Retail Park in Cheltenham.

What does Crown Estate Scotland Manage?

Rights to lease seabed out to 12 nautical mile limit for fish farms, telecommunication and electricity cables and oil and gas pipelines, plus around half of Scotland’s foreshore for marine infrastructure.

Salmon and sea trout fishing rights on many Scottish rivers, rights to gold and silver deposits and one urban property in Edinburgh that raised £13 million in the last set of accounts

Where does the Queen come in then?

Successive monarchs have revoked their rights to income from Crown Estates in Scotland but ownership remains in the name of the Crown.

The other Crown Estate, controlled by Westminster is also a public body and manages a range of similar but larger investments, including the seabed rights of England Wales and Northern Ireland.

Then it gets a bit murky

The monarch’s right to income from the Crown Estate was replaced by the Civil List in 1760 in England and in 1730 in Scotland. In addition to Civil List funding there were Grants-in-Aid payments. Since 2012 a single Sovereign Grant has been paid to support the Royal family from public funds. This has been reconnected ‘theoretically’ to Crown Estates as a proxy percentage of the income Crown Estates generates.

The BBC link (above) provides some useful information on current calculations and costs. The Sovereign Grant was £85.9 million last year, including money for the restoration of Buckingham Palace. In 2016 the cost of restoring Buck House was estimated at £369 million.

Andy Wightman wrote a useful explanation back in 2015, before the creation of Crown Estate Scotland, in response to nonsense claims from The Times, Telegraph, Daily Mail and others about the Scottish Government not supporting the Royals. The Royals and their pay packet is a reserved matter determined by the UK Treasury.

No money is paid by Crown Estate England and Wales or Crown Estate Scotland to the Queen as that would be illegal. The Treasury pay the Royal family directly as previously under the terms of the Civil List.

Where the wind really blows

The extension of Crown Estate Scotland’s area of control over seabed leasing to cover Scotland’s entire EEZ is a major development with massive potential to increase the financial return to the Scottish Government Consolidated Fund. It is estimated that over the next few years Crown Estate Scotland’s ScotWind leasing programme has the potential to deliver enough green electricity to power every home in Scotland and help the country take a major stride towards net zero.

The new generation of ‘floating’ wind farms in Scotland’s deep and very windy waters have the highest power output per blade cycle from anything previously known.

Scotland has 63.65% of the waters in the UK’s total EEZ and 55.55% of the combined maritime and land mass. See previous analysis of Scotland’s land and marine resource base. Too wee, two poor? Westminster is having wet dreams over Scotland voting for independence.

Calls for Crown Estate to clean up area described by locals...