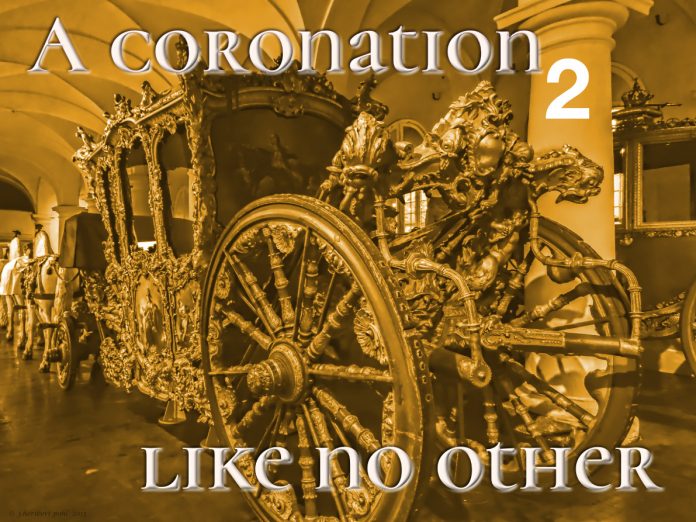 A new era
Queen Elizabeth, who turns 96 in April, acceded to the throne at the age of 25 after the death of her father King George VI on 6th February 1952 whilst Elizabeth was visiting Kenya. The time between accession and coronation was so there should appear no unseemly haste, that the family and nation should have time to mourn the late king and transfer allegiances to the new queen. The numerous people, committees and organisations involved in the coronation also needed time to plan and organise the huge event.

The task was enormous, as was the cost. What was to be the fourth and last British coronation of the 20th century is estimated to have cost £1.57 million, around £43,427,400 in today’s money. An eye-watering amount for a country suffering the ravages of war and up to the eyebrows in debt.

The coronation was the first major world event to be broadcast internationally on television with films flown in relays to many countries whilst those at home watched on their new-fangled nine inch screens of grainy black and white picture television sets. Many were bought or hired specially for the occasion with families and neighbours crowded round the interloper cabinet in the corner listening to the plummy voice of Richard Dimbleby, father of Jonathan and David, overwhelmed by the grandeur of the occasion. Eyes avidly watching, mouths agape at wealth and pageantry never before seen. Royalty, grandees and politicians from around the world. Exotic birds strutting in plumages of a multitude of colours. Silks, satins, velvets, ermine, sparkling gems and glittering jewels. The sheen of gold even on the coronation coach. This was a different world. One most never knew existed. This was wealth and status beyond ken.

The Coronation Coach
The new Queen and her husband travelled from Buckingham Palace to Westminster Abbey in the coronation coach, a coach commissioned in 1760 by George III for £7,562, festooned with carvings of dolphins, mermaids and cherubs. Made of four tons of gold, today worth around £180mn, it is seven metres long and takes a team of eight horses to pull it. It is said to be extremely uncomfortable. For months and years after, miniature versions of the coach and horses could be found in pride of place on display cabinet shelves in homes across Britain.

The route to the Abbey was lined with sailors, soldiers, and airmen and women from across the British Empire and Commonwealth. In all just under 30,000 took part. The Royal website tells that Westminster Abbey has been the setting for every Coronation since 1066. This of course is only true for England as Scotland up until 1606 had its own site where monarchs were crowned – by tradition at Scone Palace in Perthshire. Looking back, the entire coronation ceremony appears to have been based on English tradition with only the slightest nod in acknowledgement of the other countries in the UK union. Such anglocentricity for a UK monarch would not play well today in the other nations.

The Coronation service
The three hour service was conducted by the Archbishop of Canterbury, as had been the custom in England since the Norman Conquest in 1066. However in 1953, for the first time (one of the few nods to the other nations), the Moderator of the Church of Scotland, also took part, though a very minor part which now receives no coverage. 129 nations and territories were officially represented at the Coronation service with 8251 guests attending in the Abbey.

The Queen was crowned sitting in St Edward’s Chair, made in 1300 for Edward I and used at every Coronation since that time. Beneath the chair sat the Coronation Stone, known in Scotland as the Stone of Scone or the Stone of Destiny – a second nod to another UK nation.

The Stone of Destiny
The Stone is part of Scotland’s myth and legend, part of Scotland’s heritage and sense of nationhood, the original believed to be the coronation stone of Kenneth MacAlpin, the 36th King of Dalriada. In 1296 the Stone of Destiny was plundered by Edward I as spoils of war and taken to Westminster Abbey, where it was fitted into Edward’s wooden chair on which most subsequent English and British sovereigns have been crowned.

But legend also has it that this is not the original stone but a sandstone stank cover substituted by the Scone monks on hearing of the approach of Edward’s army. The stone Edward went off with is an oblong block of sandstone. The original Stone of Destiny is said to have been Jacob’s pillow, made from a chunk of black basalt decorated with carvings. Scottish patriot Wendy Wood always maintained the original was buried in a Scottish hillside, its location known to only a few, to reappear, she maintained, when Scotland regained its independence.

On Christmas Day 1950, four Scottish students repatriated the Stone, travelling down to London by car – 400 miles in the freezing cold as cars then had no heaters. In the process of removing the Stone it broke into two pieces. The larger piece returned with the students to Scotland, roadblocks successfully evaded, with the smaller piece arriving later. The Stone of Destiny was repaired by Glasgow stonemason Robert Gray whilst a huge police search was underway. There was said to be great concern in royal circles as George VI was very superstitious about it. But it was never found. However on 11th April 1951 the Stone was left on the altar of Arbroath Abbey, thereafter returning to Westminster.

For years rumours circulated that copies had been made of the Stone, with a note inside the original, and that the returned Stone was not, in fact, the one repatriated by Ian Hamilton and his friends.

Hearts for a few months had beaten faster in Scotland, whether stank cover or original the Stone was ours. Interestingly, despite the searches, the stories, the many detailed talks given later by some involved to organisations, the four students were never charged.https://www.youtube.com/embed/FKI8wwvY5mA?rel=0&showinfo=0

The Head of State under a written Scottish Constitution