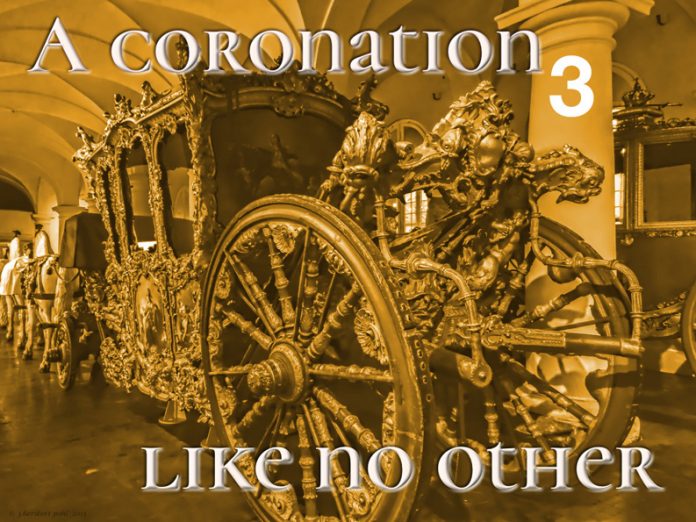 Opulence
On the big day the young Queen wore a white silk embroidered gown by British designer Norman Hartnell over which she wore the Robe of State, a 5.5 metre long, hand woven silk velvet cloak lined with Canadian ermine that required the assistance of her seven maids of honour to carry it. A far cry from many of her subjects who stitched wedding dresses from old parachute silk and made vests for their kids from bleached cotton flour bags. On her head the Queen wore the George IV State Diadem – the crown depicted on stamps. Made in 1820, the Diadem features roses, shamrocks and thistles with 1,333 diamonds and 169 pearls.

The Queen was officially crowned when the The St. Edward’s Crown was placed on her head by the Archbishop of Canterbury. This crown made for Charles II in 1661, is solid gold, weighs 2.23 kilograms and is decorated with 444 precious and semi-precious stones,. The Queen’s other crown (always good to have a couple), the Imperial State Crown, was made in 1838 for the coronation of Queen Victoria, and contains the Black Prince ruby, nearly five pounds of gold, is mounted with three extremely large stones, and set with 2868 diamonds in silver mounts, and coloured stones in gold mounts, including 17 sapphires, 11 emeralds and 269 pearls. This is the crown that is dusted down and worn each year for the state opening of Parliament.

The Queen Mother wore the Kohinoor crown with its 105.6 carat diamond (estimated value today is £50 million), a stone which has had nasty outcomes for men associated with it, so today the crown containing the Kohinoor is worn only by women. When Prince Charles becomes king, Camilla as Queen Consort will apparently receive the Queen Mother’s Kohinoor crown. The Kohinoor is only one of the huge and eye-wateringly valuable diamonds in the crown jewels.

The combined value of all these crowns, tiaras, diamonds and other precious stones beats the figure for feeding hungry children in the UK into the shade.

“The royal family has amassed one of the greatest fortunes in the world.”

Watching this video it’s impossible to believe it was uploaded to YouTube in 2020, though made in 2002. Even in those 20 years between its making and its viewing the UK is different, has shifted on its axis once considered so stable. A fascinating watch with the views of entitled, privileged people that now seem dated, but more than disquieting to view at a time when so many are wondering whether, with huge food and energy price hikes, they can afford to eat, heat their homes, or manage to buy a test to see whether they have covid-19 or not. 1953 and 2022, very different times, very different worlds.

A difference that has increased inequality, the divide between rich and poor, between rulers and ruled. Just as for many it seems impossible to comprehend how such wealth can exist, it also seems unlikely that those with the wealth can have any inkling of the hard lives those without the wealth live, precariously on the margins of existence.

At this time, faced with the devastation of the Russian invasion into Ukraine, heading for nearly three million refugees (with the UK dragging its heels on allowing those fleeing the war into the UK) and with much news of Russian money awash in London and in the Tory party, and the special treatment of Russian oligarchs, the video above is a reminder too that close links with Russia and its rulers are not new and were numerous over a century ago.