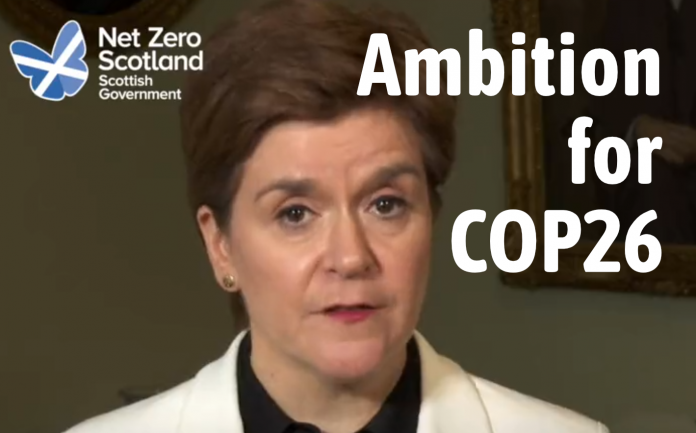 Yes, small nations and regions can make a difference in the fight to combat climate change and will be working hard to do so.

If you think small nations won’t have a voice at COP26 and that our First Minister will be frozen out of the proceedings by the blustering UK Prime Minister then think again, for Nicola Sturgeon will be closely involved with many events taking place during COP26.

Nicola Sturgeon, Scotland’s First Minister, is a co-chair of the Under2 Coalition.

The Under2 Coalition brings together 260 governments representing 1.75 billion people and 50% of the global economy.

Under2 Coalition members commit to keeping global temperature rises to well below 2°C with efforts to reach 1.5°C. 35 states and regions in the Coalition have committed to reaching net zero emissions by 2050 or earlier.

A webpage for Under2 Coalition members and stakeholders is available to keep track of the events and programme relevant for state and regional governments at COP26. This includes details about its Leaders’ Gala Dinner and Under2 Coalition General Assembly, as well as other events and opportunities for states and regions to act.

On Saturday 6th November a gala dinner will be hosted by the Rt Hon Nicola Sturgeon MSP, as First Minister of Scotland, European Co-chair of the Under2 Coalition and host region to COP26, the Under2 Leaders’ Gala Dinner will convene key leaders from states, regions, provinces and other subnational governments worldwide with key global climate leaders to celebrate climate leadership.

The evening will offer a reflection on the Under2 Coalition’s collective achievements from the past years, and a look at what’s ahead with a focus on ‘moving forward from the framing of Paris to action at Glasgow’.

The Under2 Coalition General Assembly is the annual meeting of the states and regions of the Coalition. and will be held on Sunday 7th November. It convenes states and regions in a unique opportunity to share their knowledge and first-hand experience, as well as demonstrate ambitious action that has been implemented to challenge the international community to play its part.

During this year’s General Assembly Under2 Coalition states and regions will showcase their plans for urgent 2030 action, building up from their efforts on green recovery. It will be attended by Governors, Premiers and Ministers of the Coalition either in person, or virtually.

In addition to the Leaders’ Gala Dinner and General Assembly, the Under2 Coalition is also organising and taking part in a range of other events.

8 November – States and regions for the Climate Decade

10 November – A Day for Cities, States, and Regions – This event will invite elected officials to coalesce around the shared goal of reducing the consequences of climate change. SDCL has organised the day-long event into three segments along The Royal Mile in Edinburgh that will allow attendees to learn about ways to mitigate climate change, adapt to its consequences, collaborate with other elected officials, and visit the city of Edinburgh. This event will bring together subnational representatives, including mayors, parliamentarians, and governors, highlighting the significance of their input and collaboration in COP-26 discussions.

8 November – Regions4: The catalytic role of regional governments for raising ambitions on adaptation and resilience

Find out more about the Under2 Coalition and the COP26 events mentioned here.