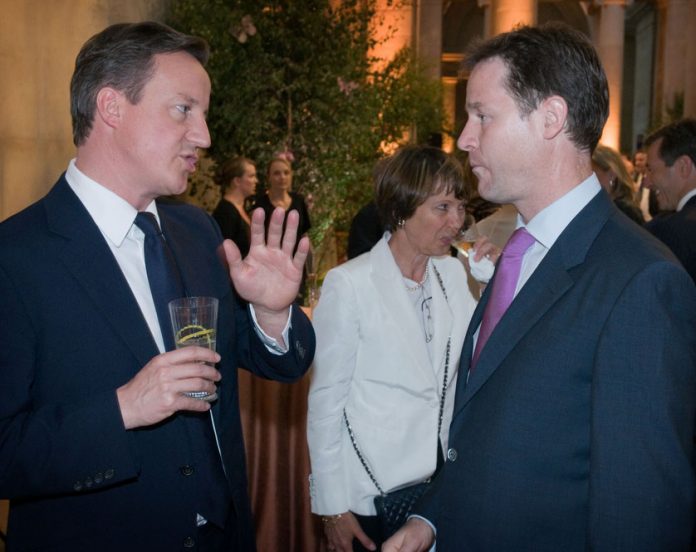 Russell Bruce writes on Conservative/Lib Dem planning for Coalition mark 2, Tory dissent in the Borders and the close contest in Berwickshire, Roxburgh and Selkirk

Life has not been a rose garden for most of the population anywhere in the UK, since Messrs Cameron and Clegg last came together in Downing Street’s backyard to usher in five years of austerity for most of us, and bucket loads of extras for the already wealthy.

“Cameron to move quickly to put his minority government in place on Friday” we were told in Monday’s FT. “David Cameron and Nick Clegg are preparing for talks on a new Conservative/Liberal Democrat coalition within hours of Thursday’s general election.”

Whilst Miliband vacillates and his colleagues contradict him over talking to the SNP, Cameron is already hitting the ground running to maximise his chances of staying in Downing Street at the head of a minority government. He has occupational rights until such time as an alternative coalition can prove they have the confidence of the House of Commons.

Cameron knows that even if the numbers work this time round, he faces bigger difficulties in forming another coalition. The right wing 1922 committee have insisted on being consulted and have been promised a place on the negotiating team. Clegg has to get any deal through a conference, so both have reason to set up an early deal they can push through opposition in both their parties.

This is where the Cameron/Clegg self interest lies. Both face internal competition, but if they can steal a lead on sleepwalking Miliband they can then tackle their internal problems later.

Far from offering the prospect of stable government, both parties are divided on post election plans. The Tories have significant problems due to a right wing anti-Europe intake in 2010 and the long established 1992 Committee, given the chance, is ready to make a punch-bag of Cameron.

There was much criticism of the time spent on the Independence referendum last year, but it has revitalised Scottish politics and built a legacy of political engagement. I cannot see that happening with an in/out referendum paralysing the whole UK economy for 4 years if the majority vote is to leave.

If we have another Conservative led government, the EU out campaign will effectively start next within days. The Lib/Dems will not stand in the way of the Tories holding a referendum. Not a red line issue, according to Clegg. Cameron has never set out what he hopes to achieve with his so called renegotiations and has antagonised his fellow EU leaders to the extent they have decided if the UK goes, it goes.

Leaving the EU is not a simple matter. It will take 2 years after a No vote for the process to be completed. A very disruptive process, but convenient in that the focus on coming out of Europe could distract from a new Tory led coalition taking the axe to the welfare budget, driving more into poverty and inflicting further inequality that risks delivering an austerity driven recession.

Meanwhile down here in the Borders in Berwickshire Roxburgh and Selkirk, we also have a Conservative organisation split on local matters. They don’t do the big stuff like the EU and promoting economic growth. They are much more into dog ‘droppings’ and the like.

The big investment that will turn the Borders economy round is the new Borders railway that has delivered much-needed infrastructure development and will open the Central Borders up to tourism growth by targeting the one million visitors who visit Edinburgh every year. Local people, along the line, will have a rail option to get to Edinburgh for the first time since 1969.

Scottish Borders Council, supported by the Scottish Government, plans to open a specially built centre to house the Great Tapestry of Scotland. It is to be built at the rail terminal at Tweedbank and will provide a new major tourism attraction where this spectacular tapestry, the longest in the world, will be housed. Visitors need reasons to make the journey on the tourism trains that will run from Edinburgh.

Scottish Borders Council approved the project with opposition coming from the Conservatives. The Conservative Westminster candidate wanted the centre to be built in Hawick, whilst his council colleagues, with one honourable exception, are still fighting to get the decision overturned and the project cancelled.

The Great Tapestry project was initiated in the Borders and launched at the Borders Book Festival by Alexander McCall Smith and designer, Andrew Crummy. Andrew worked with over 1000 volunteer stitchers from all over Scotland on the project. It is an extraordinary work of art, created by the people of Scotland, telling Scotland’s story from prehistory to modern times.

Tourism is worth over £9 billion to the Scottish Economy. In 2013 overnight visitors spent £4.6 billion, and day visitors another £4.6 billion. This money churns around the local economy, creating more jobs in the supply chain. Across Scotland, tourism generates an additional £10 billion of economic activity in the wider economy. Tourism accounts for 8.5% of employment in Scotland.

Conservatives seem to have a problem with investment designed to achieve economic growth, deliver benefit to local businesses and to capitalise and maximise the investment in the new Borders line.

Election Campaign hotting up in Berwickshire, Roxburgh and Selkirk

On the campaign trail things are hotting-up here. Alex Salmond’s visit to Galashiels and Hawick last Wednesday was followed by Nicola Sturgeon’s to Galashiels the following day. The SNP are out on the streets, actually talking to people.

There were two days last week when the postman did not deliver something from the two desperados – Michael Moore, worried about his third place in the polls, and Conservative hopeful, John Lamont. Normal bumf service has now been restored and the daily avalanche continues apace.

An email arrived this morning from Lamont stressing how this was a straight fight between him and the SNP candidate, Calum Kerr. A nice big graph of data from Electoral Calculus with Tories on 30% and SNP on 29% was message of the day, as it has been for weeks in said bumf.

Helpfully, this showed a link to the Electoral Calculus site with a more recent update – SNP now leading by 5% on 36.8% and Tory candidate on 31.8%. Probability of an SNP win has advanced 4% to 68% since last week, Tories on 25% probability (down 3%) and Lib/Dems still trailing on 7% probability.

Encouraging though the latest Electoral Calculus prediction is, I think this is still much tighter.

I am busy writing this piece when the doorbell goes – a Tory lady canvasser no less, handing over more personally addressed bumf. At least they are getting out more. Perhaps the postage budget is gone.

At UK level, the New Statesman May 2015 site is still predicting a Labour win with SNP support. They have the Tories on 273, 4 ahead of Labour on 269 and SNP on 56. If correct, that would provide a majority without any other party – a total of 325 seats, two over the magic number.

Add in Plaid, Greens and SDLP and that is another probable 8 seats that would give Miliband a majority that included all the nations of the UK. Miliband is so worried about talking to the SNP and Plaid he is missing the big picture of where legitimacy really lies.