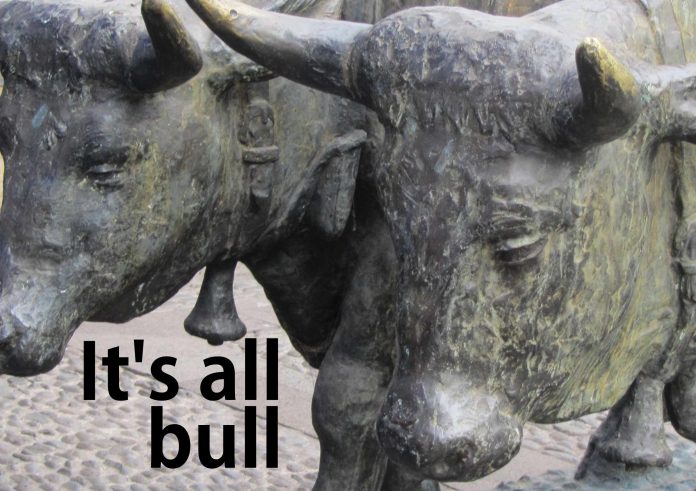 Much has been spouted, hands waving wildly, by the Prime Minister, his Ministers and his Tory MPs, to defend the breaching of international law by the Internal Market Bill. But no matter how ardent they are little of their words make sense and indeed much that has been clattered out is regarded as nonsense to bamboozle.

There is a quote, its origin long lost, that says, “If you can’t dazzle them with brilliance, baffle them with bullshit”. It seems appropriate given that’s what the Westminster government has been trying to do.

This is a Twitter thread by Mark Elliott, Professor of Public Law and Chair of the Faculty of Law at the University of Cambridge in which he rubbishes the bullshit spewed out on the Irish Protocol part of the Bill.

“By my reckoning, the Government has so far attempted in five ways to justify clauses 42 and 43 of the Internal Market Bill, which, if enacted, would allow Ministers to make regulations in breach of the Withdrawal Agreement /…

2. The powers are needed in case the Government needs rapidly to implement safeguards under Art 16 NI Protocol (Lord Keen, Advocate General*) — but the clause 42–3 powers bear little relation to the matters with which Article 16 is concerned /…

3. The powers are needed in case the Government rapidly needs to do what Article 62 of the Vienna Convention allows (Lord Keen) — but Article 62 requires a fundamental change of circumstance and permits only withdrawal/termination, not repudiation of individual obligations /…

4. The Withdrawal Agreement is a ‘special’ form of treaty because it presupposes a Future Relationship Agreement, so it’s ok to breach the WA if no FRA materialises (various Ministers) — this is just wrong /…

5. The Internal Market Bill would amount to an ‘acceptable’ rather than an ‘unacceptable’ breach of the rule of law (Robert Buckland, Lord Chancellor) — but the law draws no distinction between these two forms of breach /… So: five attempts to justify clauses 42–3, none of which is satisfactory as a matter of law.

And keen to add some more

“The advocate general said he had “found it increasingly difficult to reconcile” his obligations as a lawyer with provisions in the Internal Market Bill.”

Keen was Chair of the Scottish Conservatives from 2013 until appointed Advocate General in 2015, representing the UK government in many high profile cases. According to a post on Twitter, Keen, in 2018, made a speech to the Public Law Group on the rule of law and role of law officers during which he said: “the duty of the law officers is to ensure that the government acts lawfully at all times.” Adding: “If the rule of law is disrespected and falls into disrepute, elected governments will not be able to govern effectively – any government is simply shooting itself in the foot if it undermines the rule of law.”

According to the Code of conduct for Westminster MPs, Article lll.5, Members have a duty to uphold the law.

Code of conduct for MPs

This, along with Lord Keen’s comment raises the question of John Lamont and David Mundell, both Scottish Tory MPs, both solicitors. Can they reconcile their obligations as solicitors (presumably both remain registered as solicitors with the Law Society of Scotland, the professional body for all Scottish solicitors that sets the standards which practising solicitors must meet) with this code of conduct and with the provisions in the Internal Market Bill?

Under the Law Society rules and general guidance, section B1.2 Trust and personal integrity states:

1.2 You must be trustworthy and act honestly at all times so that your personal integrity is beyond question. In particular, you must not behave, whether in a professional capacity or otherwise, in a way which is fraudulent or deceitful.

No doubt Mr Lamont and Mr Mundell will be bearing that requirement, the MP code of conduct and Lord Keen’s resignation in mind and act accordingly.