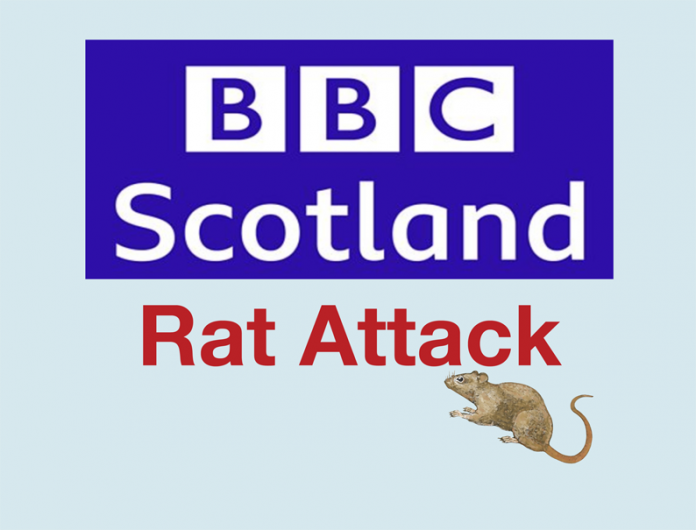 Immediately after the 2014 Indyref, the then incoming head of BBC Scotland openly admitted the broadcaster had lost the trust of huge swathes of the Scottish public. Donalda Mackinnon pledged to regain that trust.

Sadly Mackinon’s words proved hollow. The broadcaster’s SNPBad downward spiral continued after the EU referendum. A string of high-profile resignations hit the station in early 2020 and the instalment of controversial reporter Glenn Campbell as the new political editor was a two-fingered salute to critics.

BBC Scotland News & Current Affairs is a broadcast version of the Scottish Daily Mail. Indeed the newspaper often adorns the main news page with whichever anti-SNP headline has been chosen for that day. Good Morning Scotland presenters regularly read out politically motivated headlines from the paper and its many British Nationalist cousins.

A colonial culture has embedded itself within BBC Scotland since 2014. It manifests itself in the manipulation of political news. The Scottish Tories enjoy almost total freedom to launch attacks on the SNP and can rely on BBC Scotland to push the attacks, no matter how questionable.

Just this week we saw not one but two Scottish Tory attack lines headlined by BBC Scotland. The ‘Rats rampant in Glasgow’ was accompanied by the ‘Booster Jag too slow’ attack line. Both were fake.

According to the Scottish Tories, Glasgow was swarming with rats and it was the SNP’s fault.

The story was as disgusting as it was untrue. Every UK city has a problem with the vermin. The problem has been made worse by the pandemic , again in every UK city.

But that didn’t stop BBC Scotland from promoting the Scottish Tory claim that the problem was unique to Glasgow and rats were running around the streets. In a survey of rat sightings at the height of the pandemic Glasgow wasn’t even mentioned in the top ten UK cities.

The ‘rat attack’ came on the same day as another example of politically motivated junk journalism that implied Scotland’s booster jag programme was behind schedule.

The story appeared on Reporting Scotland on October 19th and again on October 26th.

These weren’t the only politically motivated attacks on the SNP broadcast by BBC Scotland last week. The week began with an attack on vaccine passports – a regular favourite of the broadcaster. The source of this attack was the Scottish Hospitality Group [SHG].

The Scottish Hospitality Group regularly attacks Scottish government pandemic measures and is often the source of critical headlines on BBC Scotland where it is presented as speaking on behalf of the sector. It’s spokesperson is Stephen Montgomery, seen below posing with Scottish Tory father and son duo David and Oliver Mundell.

SHG was unheard of before the pandemic. That’s because it didn’t exist. The group was formed in September 2020 from a small WhatsApp group. It is, to all intents and purposes a PR campaign. [Source – https://archive.md/qTsOZ]. There appears to be no formal organisation and no specific website. All that exists is a twitter account and a LinkdIn page. Click on the ‘Company Website’ link on the LinkedIn page and you’re taken to the website of Stephen Montgomery’s hotel.

How such a ‘group’ came to enjoy so much coverage on BBC Scotland is a mystery. How it can be described as speaking on behalf of the hospitality sector is equally mystifying given it represents a tiny fraction of the sector.

But what of the story itself, that Scotland’s vaccine passport scheme was an “unmitigated disaster”? Well this claim was based on the fact that some folk were turning up at nightclubs with no proof of vaccination and were being refused entry. Far from being a disaster, the scheme was working as intended. You never hear from venue owners who actually support the vaccine passport scheme. The clip below is from STV News.

The above three stories were major items on BBC Scotland last week. The resource allotted to circulating them was considerable. Yet questions remain over the veracity of the attacks and why BBC Scotland promoted them so readily.

Contrast the apparent relish and eagerness in headlining attacks on the SNP and Scottish government, with the reluctance to pursue the Scottish Tories. A case in point was the Carbon Capture betrayal.

In March this year the UK Govt announced the ‘North Sea Transition Deal’ intended to fund the move away from oil & gas and into renewable energy. Reporting Scotland covered the announcement that evening with strong hints that the UK Govt’s Carbon Capture project was on its way to the north east of Scotland, and so too were thousands of jobs.

The BBC continued to promote the idea that a major Carbon Capture plant was being earmarked for Scotland as did several Scottish Tory MSPs, including Douglas Ross who also implied thousands of jobs would come to Scotland.

On the weekend of the Conservative party conference in October, BBC Scotland claimed to have been told by the Scottish Tory leader that “very good news” was on its way regarding Carbon Capture.

However on October 12th the UK government revealed that the Carbon Capture project had been awarded to two plants in England. Scotland had been betrayed.

The betrayal led to fury within Scotland’s renewable community and the Scottish government. At Prime Minister’s Questions SNP Westminster leader Ian Blackford condemned the decision. STV News covered the story in depth, allocating four and a half minutes to what was a huge issue given the backdrop of COP26. BBC Scotland’s flagship evening news programme Reporting Scotland gave the story … 25 seconds.

It took two days before BBC Scotland even attempted to question Scottish Tory leader Douglas Ross on the betrayal. By waiting two days the broadcaster gave Ross time to prepare a response. Not mentioned in the belated interview was the fact that Carbon Capture had been promised to Scotland over seven years earlier. Just months before the 2014 Indyref. The pledge was scrapped after Scotland returned a No vote.

On October 17th a House of Commons report was published which looked into UK government handling of the pandemic in the early days. The report was highly critical of Boris Johnson and his ministers. Every news outlet carried the story and made clear any blame for shortcomings lay squarely with the UK government.

However BBC Scotland had different ideas. In news bulletin after news bulletin BBC Scotland presenters and reporters tried to imply the Scottish government was equally to blame. The public was told that Nicola Sturgeon and her administration had been in ‘lockstep’ with the UK government and, by extension, were just as guilty.

The narrative was fake. The truth was that the Scottish government had embarked on a different path from its southern counterpart in the early months of the pandemic. The day after Nicola Sturgeon broke ranks with the UK Govt and announced a ban on large gatherings in Scotland, BBC Scotland accused her of losing the trust of the public.

On April 28th 2020 BBC Scotland didn’t just highlight the divergence between both governments, it tried to present the difference as a Scottish government failing. The ‘England good/Scotland bad’ mantra became a regular theme on BBC Scotland.

There was no ‘lockstep’ in the early months of the pandemic. The attempt by BBC Scotland to rewrite history by claiming there was is best demonstrated by the short clip below, which shows the BBC’s Scotland editor Sarah Smith, speaking in May 2020, accusing Nicola Sturgeon of enjoying taking a different approach to that of the UK government. It then shows BBC Scotland reporters a year and a half later insisting the Scottish government was in ‘lockstep’ in the early months of the pandemic. Both of course can’t be true.

It’s almost unheard of for the UK government or the Scottish Tories to be retrospectively scrutinised or challenged for claims they’ve made that have turned out to be false, misleading or fabricated.

At the start of October Scottish Tory leader Douglas Ross told BBC Scotland that Brexit wasn’t the cause of a lack of slaughterhouse butchers that was threatening Scotland’s pig farmers, and that visas weren’t required in order to address the problem. Within days of his claim, the UK government announced it would be issuing 5000 temporary visas to address the lack of slaughterhouse butchers. Ross has never been challenged on his nonsense claim.

Ross’s attack on Humza Yousaf, when the health secretary urged folk to think twice before dialling 999, was similarly noteworthy for its lack of scrutiny. The ‘think twice’ advice, or similar, has been widely accepted as not just advisable at times when the ambulance service is under stress, but compulsory.

The story was embellished nonsense. What was actually happening in a handful of cases in the north east of Scotland was that police officers were taking it upon themselves to drive people to hospital in non-life threatening situations after being called out to an incident, something that has happened for years.

It’s rare to hear a Scottish Tory politician being asked an awkward question on air. So rare is it that Scottish Tory interviewees, when encountering such a question, are often embarrassingly ill-prepared. On more than one occasion the phone line has been suspiciously lost.

This week a poll of Scottish voters found an overwhelming number support the devolution of broadcasting to Scotland. The Panelbase poll, commissioned by James Kelly of Scot goes Pop, asked “Which parliament do you think should have law-making powers over Scottish broadcasting?”

When ‘don’t knows’ were stripped out, the poll found 75% in favour of the Scottish parliament controlling broadcasting and only 25% in favour of it remaining with Westminster.

But it’s never going to happen. The BBC is the Unionists’ most powerful weapon in their fight against Scottish independence. They aren’t about to hand it over.

To be able to keep bringing you these popular articles and maintain our output of graphics, we really do need to get a bit more funding in place to promote the stories that matter on our journey to independence

All BBC interviews are equal, but some are more equal than...

So, think you can trust BBC Scotland – well read on...

Battle for BBC Scottish Six may still be worth fighting –...