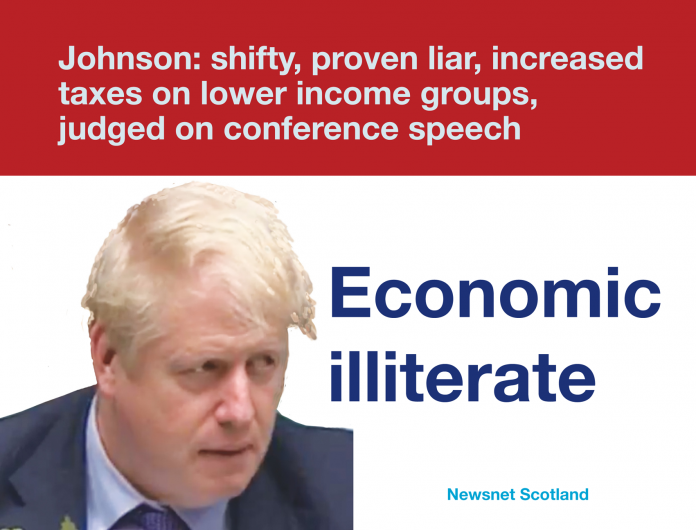 Johnson has spoken and confirmed we are not all in it together but all on our tod and can expect no help over the current surge in fuel prices. His speech went down well with delegates in the hall but elsewhere in the real world went down like a wet blanket in a polar vortex, including with a number of his own MPs.

At a time of price crisis as seen with heat, light and food the people have a right to expect a national government to take steps to ameliorate such difficulty, as France, Spain, Italy and Greece are doing. An adjustment to such volatile changes is the least people of these islands should expect. Not Johnson’s government who failed to understand the economic impact of not making permanent the £20 uplift in Universal Credit with food and fuel adding to real life inflation for ordinary families, plus a tax increase already in the pipeline that will take even more money out of pockets and purses.

It is not just that the winter months ahead are going to be very hard for the majority of families and single people but that massive chunks of money are being needlessly taken out of the economy. Lower and middle income groups spend all or a large share of their incomes with the result that money circulates through the economy helping the economy recover.

Everything the Johnson government does and doesn’t do has a negative impact on people’s lives and the real world chances of economic recovery. His chancellor blustered on about no magic money and balancing the books as if the UK ever did that. A big surprise announcement in Johnson’s speech that some in the media had speculated on, failed to materialise. Johnson and his government are living in another world to the rest of us.

There is no easy solution to the current fuel crisis but Johnson’s government has made it worse by not understanding that England’s reliance on natural gas was not sustainable. Never a thought that a world trying to move away from coal would mean vastly increased demand for natural gas. Governments are required to think ahead and understand international logistical probabilities.

Gas prices have been soaring which is not good news to anybody as we are all having to pay a great deal more for gas, electricity and petrol in the coming months. The world is over dependent on gas as countries try to phase out coal, the most polluting of fossil fuels as we covered in detail in our article How is the world doing on using less fossil fuels?

Our conclusion was the world is not doing at all well with far too much coal still being used, indeed increasing. The result is the price of gas, oil, electricity and coal have seen upwards movement. Gas started the year at under 50p a therm and November delivery prices surged on Wednesday to £4.00 a therm until Vladimir Putin indicated supplies would be freed up, recognising that he was in danger of over playing his hand. The FT reported prices fell back to £2.71 after Putin’s statement.

Energy prices remain far from stable as Putin knows only too well. If he instructs Gazprom, the Russian state gas company, to release more gas to Europe they will do as told and to the extent that suits Vladimir Putin. However prices move in the next few weeks and months, volatility will remain and nothing can remove the fact that world demand exceeds market availability. Today’s lower delivery price at £2.71 represents a 442% increase in the price of gas at the start of 2021.

There is no likelihood that gas will ever return to 50p a therm for years, if ever. For the audience at the Conservative party conference it is a reasonable bet most will be able to comfortably afford increases in fuel costs. No doubt some will not find it as acceptable as their response they gave to Johnson’s speech.

Scotland is much less dependent on gas as we have covered in our Power Scotland series of articles. As the devolved government in Holyrood does not get access to oil and gas profits and taxes Scotland will be equally hit by Johnson’s misjudgements with limited capacity to ameliorate the impact on the majority of the population.

It is past time for the shit to hit the Johnson fan. Far from levelling up Johnson today set such a low bar that only the wealthy are going to see a real levelling up as profits from inflated energy prices just keep topping up their financial wealth.